Autism and Seizures: Conor's Second Grand Mal Seizure (That We Know Of) 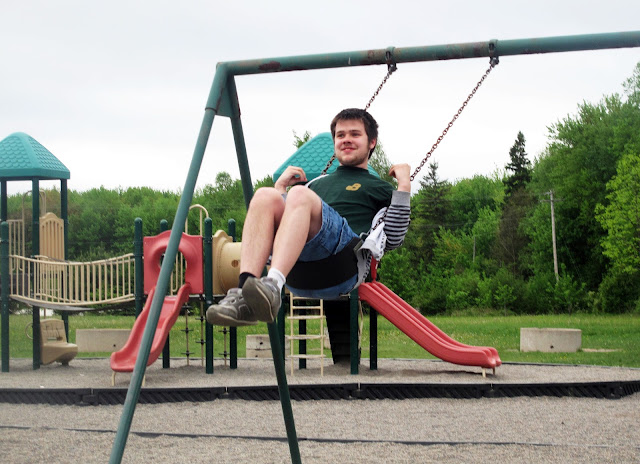 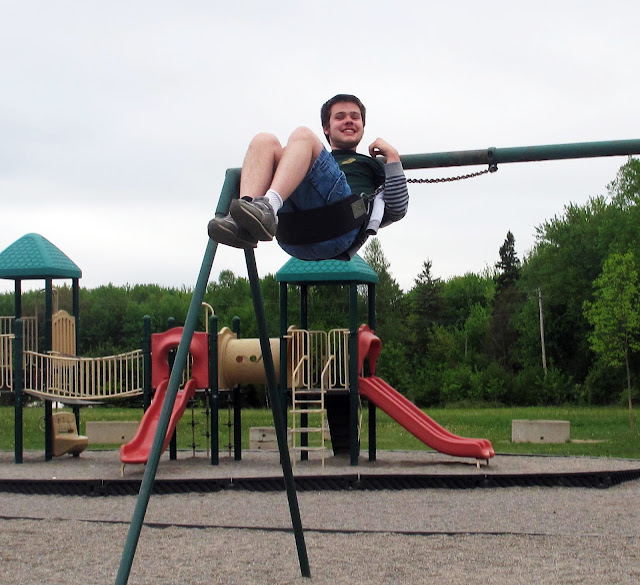 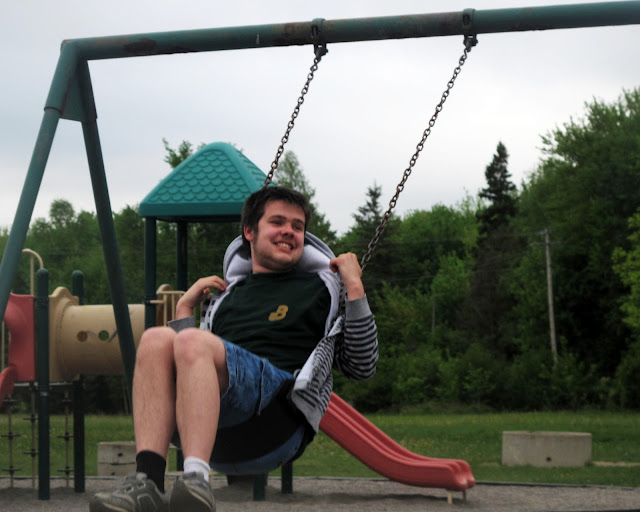 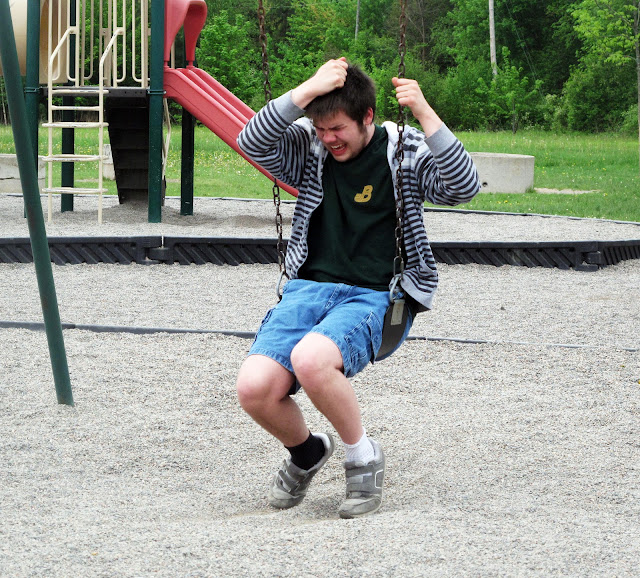 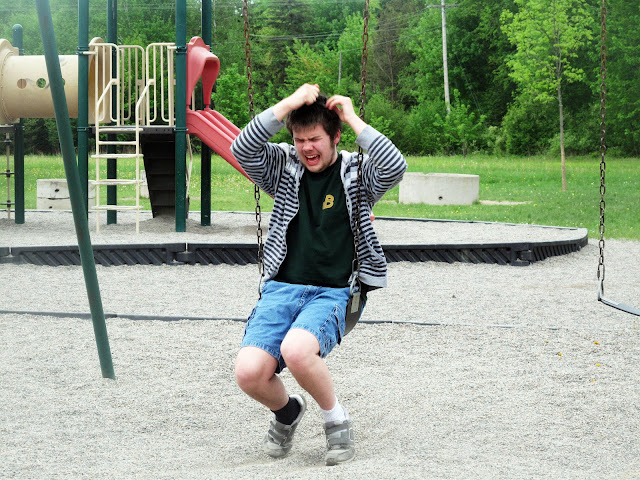 The pictures above were initially posted on this site on May 26, 2012, several months before Conor's 1st known Grand Mal Seizure in November. As I posted then, external conditions were perfect and Conor was enjoying a favorite activity in a favorite location when he suddenly began hitting himself in the head. I don't  know what caused it, Conor lacks the communication skills to explain, but it was definitely internal. Together with many similar circumstances including sudden closing of his eyes and looking blankly into the distance I reported them to his pediatrician as possible seizure activities. The pediatrician did not disagree but did not want to provide medication in the absence of any falling behaviors. Two Grand Mal seizures later and a visit to a neurologist and Conor is just now starting on medication which will hopefuly reduce seizure activity.

My autistic son's second Grand Mal seizure, of which I am aware, happened when I was in an adjacent room less than 15 feet away this past Sunday. I heard the noises when his seizure began and recognized them this time for what they were. I jumped up immediately, laid him on his side and cushioned his head while his Mom called the excellent 911 emergency responders who took Conor to the local hospital, the DECH, for the excellent care and attention they have have always provided members of our family. (Including me during my recent hospitalization for a major asthma attack).

I was scared this past November when Conor suffered his first Grand Mal seizure. I was just as scared this second time. I can't believe that this can happen repeatedly without serious life threatening consequences especially if no one hears him during the night, or if it happens during swimming which he dearly loves. Conor was seen by a neurologist just 4 days earlier and we had, after some base line blood tests were done, started on the low dose end of a progressively heavier medication schedule. Hopefully as the dosage is increased and has time to take effect the seizures will cease.

I look at the multitude of "autism" studies on Google Scholar and have no idea what most of them involve in terms of autism as a disorder or the serious conditions which are related to the severe forms of autism. I do know that very few of them address the severe realities faced by my son. I do know that when the APA spends several years "recompartmentalizing" the diagnostic criteria for autism and epilepsy to come up with the DSM5 ASD they are doing no one with severe autism any favors. Their efforts and funds would serve a far better purpose if they followed the lead of the emergency responders and hospital staff at the DECH who have treated Conor and cared for him so well. Focus on helping people with autism, particularly those most in need, and save the idle academic curiosity "autism" studies for your retirement.
Posted by Unknown at 12:53 pm

Harold, I'm sorry to hear of Conor's second grand mal, but glad that he received good care and is okay. Nigel has had several grand mal seizures, and as a parent it is terrifying to witness, plus worrying about future seizures while swimming or bike riding, hiking or climbing. Our children's lives, and ours, are so deeply affected by epilepsy. Sending hugs to you and your family.

Thank you for your thoughts and hugs Tanya.

My my that does look familiar.So did that cause Conor to head bang like picture three and four suggest?Mine started real early.I can remember head banging when I was three years old,just as I can remember the eloping and dementia episodes starting then,but those were more common for me.

I know you have mentioned self abuse in the past.If that means head banging,and you know when it started,you can pinpoint when the seizures began.I would not be surprised if Conor has been head banging for years.Head banging means seizures.It's a type of involuntary movement you can't control,but you are partially aware you are doing it.

You say Conor is intellectually disabled,but we really don't know how bad.Is he nonverbal?Can he talk on the level of a three or four year old child?>Then he can tell you what is wrong.

I know they are many types and causes,but seizures are more common in more severe types of autism,and that can be either autism with ID,metabolic disease,or more severe autoimmune diseases,like cerebral palsy.

Are you aware that there are two different types of cerebral folate deficiency syndrome?One has a lot of medical problems,and the typical mitochondrial type of autism,like I have.The other has a lot fewer medical problems,and has classic autism with intellectual disability.There is a .pdf of the original article you can find on Google.

The only person I know besides me who has positive folate autoantibodies is a woman with a 20 year old son who has classic autism,and is nonverbal.They go to the same DAN! doctor I do.He has seizures and head bangs too.

sorry to hear about conor's seizures. I hope you and he will be okay soon.

When Wulf began having seizures we discovered we have a "seizure dog" - Dippy goes close to him, stands very still, and makes a wierd sound - a cross between a growl and a meow - before he seizes. Wierd, eh? I track seizure settings, duration, localized onset, all that fun stuff...) which mostly gave me something to do until we finally got a decent neurologist. Wulf has finally been able to step down the drugs, and we are now considering a modifief Atkins diet (I get antsy about diets: traumatized by the GF/CF true-believers). When Wulf was about two I was convinced he had Landau Klef. syndrome - his behaviours seemed seizure-like, with no discernable antecedents. Hang in there: parenting is a never-ending adventure. Best regards to you all!

We are taking our 9yr old in for his fourth neurologist appt in a few days. He is on depakote as a "mood stabilizer" right now because he will be fine one second, and then the next he will become aggressive, engage in Self injury, and the whole 9 yards. He has now added jerky movements to all of this. Dr's have not diagnosed seizures as of yet because he never has one of these attacks during their 1-hour EEG. It's awful. No antecedent has been noticed, these things can happen any time, anywhere. When they do, his personality changes in an instant. I hope Connor gets the help he needs and gets some relief!

Hugs to you Harold, I'm sorry to read that Connor suffered a few seizures. I hope medications are working. I know very well how scary seeing your autistic child go into a seizure.

Thank you Kim. I have followed your blog and YouTube videos and admired your honesty and courage for several years. Very nice to hear from you. Conor has started on medication now and, after getting some baseline blood tests done, is working progressively, from a small dosage up to stronger concentrations. Harold