Wright Is Right: Autism Has Become An Epidemic 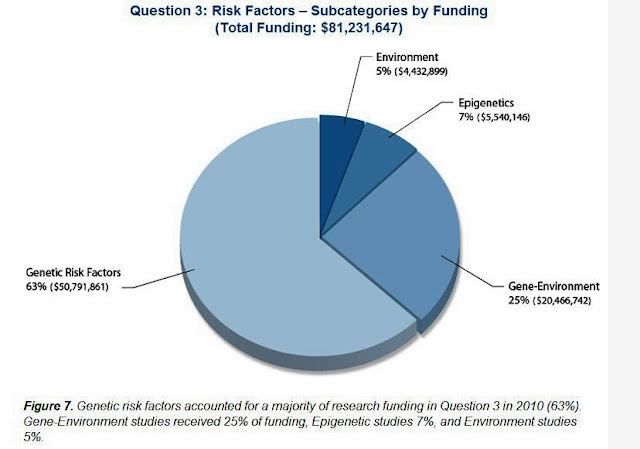 Bob Wright co-founder of Autism Speaks testified before ta US National Congress  committee and made a number of important points including what is obvious to those who are actually paying attention to autism realities: autism has become an epidemic.  The usual suspects, those autism researchers who study whatever suits them, whatever narrow issue they find interesting or can build a career around, remain in denial. The deniers have no solid evidence to support their position.  It is really quite simple. They are wrong.  Autism is an epidemic. Wright is right.

Parents and other family members with 24/7 responsibility for caring for the autistic children we love can not ignore autism realities. Many of us can see the autism epidemic and we can not redefine our children's challenges out of existence by amending the DSM every few years. (Yesterday the APA voted to accept the new DSM5 including the New Autism Spectrum Disorder that will expel many with autism and intellectual disability and complete the reshaping of Asperger's as Autism.) We can not pretend autism is not a disorder or that gee whiz autism always existed.  We are not comforted by the idle speculation that all of history's  scientific, literary and artistic geniuses are all examples of "the autism advantage".

Those who deny the autism epidemic, who blame their own periodic diagnostic definition changes, diagnostic substitution, increased awareness and those imaginary autism services that make autism a must have diagnosis see only what they want to see.  They want to see a genetic explanation for autism and they refuse to consider environmental factors.  "It's gotta be genetic" and that means there is no real increase because genes don't change that quickly.

The failed premise on which the deniers excuse their repeated failure to find a gene or genes that truly cause autism symptoms or disorders is that autism is purely genetic and that the air, water, food, we consume, the toxic chemicals used in toys, clothing, jewelry, furniture and injected into pregnant women can not really have any effect on the neurological development of our children.  That reckless assumption is the kool-aid of those who deny the existence of the autism epidemic. Many parents refuse to drink that kool-aid.

A prime example of the career influence and "its gotta be genetic" mandate on the autism research community is the example of Dr. Peter Szatmari's reaction to the CATS, California Autism Twins Study.  Dr. Joachim Hallmayer,  who was involved with the CATS study, indicated that CATS demonstrated the importance of an environmental role in autism causation with both genetic and environmental research playing significant roles.  Prominent genetic autism risk researcher Dr. Peter Szatmari, offered a different interpretation, one that I found bizarre in light of the previously existing autism emphasis on genetics alone as explaining autism:

"“I think we now understand that both genetic and environmental factors have to be taken seriously,” said Dr. Joachim Hallmayer, an associate professor of psychiatry and behavioral sciences at Stanford and the lead author of the new study, which is to be published in the November issue of Archives of General Psychiatry. ....... surprisingly, mathematical modeling suggested that only 38 percent of the cases could be attributed to genetic factors, compared with the 90 percent suggested by previous studies .... And more surprising still, shared environmental factors appeared to be at work in 58 percent of the cases"

“This is a very significant study because it confirms that genetic factors are involved in the cause of the disorder but it shifts the focus to the possibility that environmental factors could also be really important."

Dr. Szatmari has it backwards. His quote indicates a desperate effort to continue the funding emphasis on genetic autism research. He clearly reverses the importance of the CATS study by indicating that it confirms a genetic role in autism causation which, to my knowledge, is not in dispute.  In reality the CATS study,  as indicated by its lead author, Dr. Hallmayer, indicates that study points out the importance of environmental factors within the context of a shared gene environment interaction model of autism causation.

The significance of the autism research genetic obsession is substantial.  As long as the cult like belief that autism is 100% genetic persists it is easy to deny the existence of the autism epidemic.  When it is acknowledge that environmental factors are involved simple denial is no longer an option.
Dr. Jon Poling is a neurologist and father of Hannah Poling, an autistic child. He   and his wife, a registered nurse and lawyer, could not be written off as  irrational, hysterical parents when they sought compensation for his child's autism symptoms under the legislated process in the US.   His comments in a March 13, 2009 opinion column of the Atlanta Journal Constitution must be heeded by government decision makers and autism researchers in the US and Canada:

We should be investing our research dollars into discovering environmental factors that we can change, not more poorly targeted genetic studies that offer no hope of early intervention. Pesticides, mercury, aluminum, several drugs, dietary factors, infectious agents and yes — vaccines — are all in the research agenda."

We are long overdue in developing a A Research Strategy to Discover the Environmental Causes of Autism and Neurodevelopmental Disabilities as advocated by Philip J. Landrigan, Luca Lambertini and Linda S. Birnbaum in April 2012.   Such a strategy will require a redressing of the imbalance in genetic and environmental autism risk funding as advocated by Dr. Irva Hertz-Picciotto.

The denial of an autism epidemic arises directly from, and is supported by, the   "it's gotta be genetic" belief that has dominated autism research and autism risk research funding.

We are living in an autism epidemic and it is time to find and address the causes of that epidemic.  The time is now!
Posted by Unknown at 10:21 am