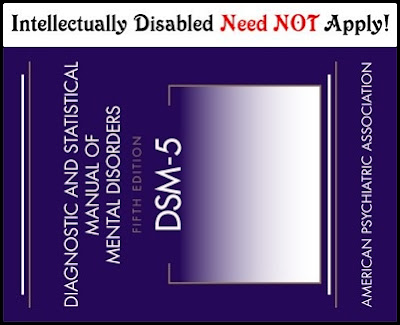 The American Psychiatric Association's passage of the DSM5 and its New Autism Spectrum Disorder was passed Saturday December 1, 2012 without any of the mainstream media taking noting of the real targets, the real victims of the new Autism definition: the intellectually disabled. The media continues the narrative of Amy Harmon and the powerful New York Times that raised concerns about the exclusion of Asperger's at the High Functioning end of the spectrum but ignored, as media and health care professionals so often do, the targeted exclusion of those with severe intellectual disabilities from the autism spectrum even where those ID's are accompanied by EVERY SINGLE CRITERION listed in the new ASD.

It is true that Asperger's is now formally forced into the same spectrum as  persons with lower functioning autism and that the name disappears but with the removal of those with Intellectual Disability what remains is essentially Asperger's under the autism label. There is no substantial difference between the DSM-IV Asperger's and the DSM5 Autism Spectrum Disorder.  Both criteria are notable  for  the exclusion of those with intellectual disability.  In the DSM-IV persons with intellectual disability and autism were excluded from an Asperger's diagnosis but included in autism.  In the DSM5 those with Asperger's are rolled into autism but the severely intellectually disabled are forced out.  The ID'd are included in a separate intellectually disabled category but that does nothing to bring attention to address their autism symptoms. They are now excluded by the only targeted exclusion of the DSM5 Autism Spectrum Disorder:

Dr. Catherine Lord leader of the APA team that redefines and streamlines autism to exclude those with severe intellectual disability confessed that very fact in the interview with the New York Times' Amy Harmon:

"Catherine Lord, the director of the Institute for Brain Development at NewYork-Presbyterian Hospital, and a member of the committee overseeing the [DSM-5 autism] revisions, said that the goal was to ensure that autism was not used as a “fallback diagnosis” for children whose primary trait might be, for instance, an intellectual disability or aggression." [Bracketed terms added for context - HLD]

In the DSM5 the APA is taking another giant step in its process of streamlining autism by excluding the intellectually disabled element of what is in fact a pervasive developmental disorder or grouping of symptoms. It is redefining autism, a grouping of symptoms which included intellectual disability in many cases, to remove it from that grouping.  Intellectual Disability is in fact present in the majority of cases of DSM-IV Autistic Disorder, the only specifically designated "autism" in the DSM-IV which also represents the classic, original autism:

"the autism umbrella has since widened to include milder forms, says Dr. Marshalyn Yeargin-Allsopp, a medical epidemiologist at the CDC. For example, it now includes Asperger syndrome, where the sufferer is socially impaired, but experiences typical language development.

The 40% figure is for the entire autism spectrum, inclusive of those with Asperger Syndrome who are by definition not intellectually disabled. It is in the original classic autistic disorder where the ID'd constituted the vast majority, estimated by the Canadian Psychological Association in its 2006 brief to a Canadian Senate committee as approximately 80% of those with autistic disorder.

The language of the new DSM5 autism clearly targets the exclusion of the intellectually disabled.  Catherine Lord acknowledge that the exclusion is intentional.  La Malfa, in one study concluded that the relationship should be explored, not ignored, as the DSM5 aims to do.

One possible reason for the exclusion is that autism research has often as Dr. Catherine Lord herself has acknowledged, tended to exclude the intellectually disabled as participants in autism studies:

This trend has probably been enhanced by the use of technology like MRI's that are difficult, very difficult, to use with those who are severely intellectually disabled.  As a parent I have to confront that reality right now in terms of examinations of my son arising from his recent Grand Mal seizure.  Unlike parents, researchers aiming to get grant money and complete autism studies can ignore the realities presented by those with autism and severe and profound intellectual disabilities.

The great accomplishment of the DSM5 Autism Spectrum Disorder redefinition of autism will be to legitimize the exclusion of those with severe intellectual disability from autism research.

As someone from the field of intellectual disability and ASD, I am not at all concerned that the new criteria will exclude people with ASD and ID. What the new criteria seems to be trying to exclude is people with just ID getting an ASD diagnosis which does happen sometimes and misdiagnosis is not helpful. The differential is not difficult for experienced clinicians. The type of social/communication difficulty looks very different. Even the way the ID is expressed ususally looks different in ASD. In fact before 1994 (DSM-IV) many people with ID were excluded from ASD diagnosis. (I was part of a team that recently deinstitutionalized some adults with ID and we ended up giving 3 out of 6 adults a +ASD diagnosis because it historically hadn't been done). Also Developmentally what I see is that many, many very young kids with ASD also test in the ID range especially before any language comes in and before they have learned to do "table tasks", and certainly the new DSM5 criteria will not exclude them. What I'm trying to say is that ID in itself will not be an exclusion nor will diagnosticians like myself be treating it as such. DSM5 just seems to be explicating what has always been understood and supposed to be applied anyway. You were never supposed to give a diagnosis of ASD for impairments better accounted for by ID. DSM5 also says that the symptoms have to be present in childhood (duh! - again, something already required in the group of disorders described as "childhood") Also new, "Symptoms together limit and impair everyday functioning" - which again Duh! as a trained clinician one is not supposed to give a diagnosis to someone who is not at all impaired by the symptoms. So for whatever reason, DSM5 criteria for ASD is explicating things specifically that are already understood/implied or even described in the overview to the whole DSM.

Thank you Tracey from Canada, I appreciate your comment although I am not persuaded. You did not make reference to the specific language and structure of the DSM5 description of ASD.

Each of the four criteria are mandatory: A,B,C,D.

Mandatory criterion A contains the "not accounted for by: exclusionary language. Since a person with severe ID will be caught by that language the fact the person will be excluded since EACH criterion is mandatory. EVEN IF the person also meets the other criteria.

That is the plain wording of DSM5 ASD whether the experts mean something else or not they have used language that excludes ID based on one of the mandatory criteria.