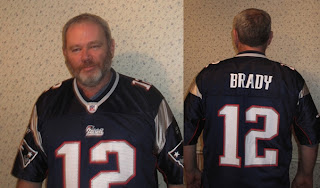 Conor's EEG exam had been scheduled for yesterday as a result of his scary Grand Mal seizure a few weeks ago.  (Not that I am superstitious but I did wear my Tom Brady Patriots jersey to the EEG for good luck) The EEG techs indicated it would take time to get set up: about 20 minutes.  They hoped to get at least 45 minutes of readings after that.  With Conor's autistic disorder, profound developmental delays and sensory issues I questioned in my own mind whether they would be able to get 45 minutes before Conor started removing the head wrap with the connecting wires.


My questions were answered positively when Conor provided approximately 70 minutes of readings without breaking a sweat! His pediatrician had consulted the neurologist involved and they decided on the best medication for Conor to take that would allow him to be drowsy (and calm) while interfering minimally with the readings.  His pediatrician, Dr. Messenger, provided clear instructions to me to give Conor his medication one hour before   the scheduled start time. Perhaps because of his own procedures, perhaps because we have met and discussed Conor and autism on several occasions over the years, he politely made sure Dad got the message and repeated the instructions twice.   The technicians and staff at the DECH EEG section were also outstanding.  We completed a service survey on leaving and rated our experience 10 out of 10! Conor's mom Heather also contributed to the successful outcome. She snuggled on to the hospital bed with Conor and stayed beside him throughout the process.

The star of the day though was Conor himself.  The techs allowed me to see his face on one of their visual screens. I could only see his eyes and above.   His eyes were open and he was calm throughout 70 minutes.  When it was over he left the hospital on his own steam holding our arms for support in the slippery snow storm conditions outside the hospital as we left.  We went through a Burger King drive through on the way home and rewarded Conor with a BK burger.  (Dad got one too!) Conor was quiet but content until he went to sleep at his regular time last night.

Small things can be a challenge with Conor. That is reality, Conor's autism reality, every day. Yesterday a big challenge, an EEG exam, was no problem for my buddy who provided 70 minutes of readings.   Meanwhile, last evening, Tom Brady led the Patriots to a thrashing of the upstart Houston Texans. Brady was excellent. Conor was our MVP though.
Posted by Unknown at 6:38 am

Glad it went so easily and he enjoyed his lunch afterwards.

So glad to know all went well. Yeah Conor!!!

Unknown said...
This comment has been removed by the author.
5:40 pm

I am scheduled for one of these on the 23rd (I have autisim and seizures too) and I myself am wondering how it would go this time (given my history of running away and having meltdowns).

Many congratulations to Conor for being so brave, especially given the sensory issues and whatnot. Excellent!!