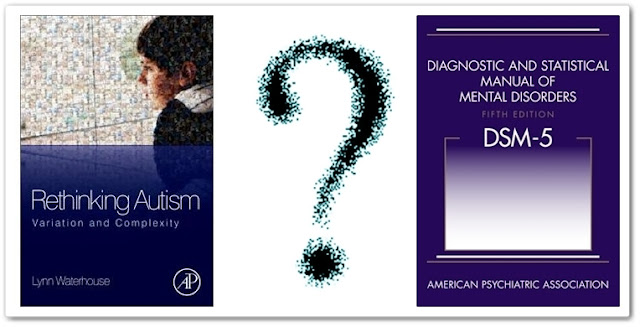 The succinct and famous quote by Stephen Shore about the variation and complexity of autism disorders is cited often and just as often ignored. In fact it is ignored completely by the DSM5 which has merged high functioning autism and Asperger's into the streamlined New Autism Spectrum Disorder while ignoring the varied and complex realities, the heterogeneity of autism disorders.  As the parent of a severely autistic son with profound development delays, as an autism advocate who has visited adults with severe autism symptoms living in psychiatric facilities,  I do not agree with or support the vanilla flavored, stream lined DSM5 "autism". It does not reflect reality, it does not reflect the complex heterogeneity of autism disorders.

As a humble autism parent advocate  I am well aware that my opinions are worth   little to the DSM5 intelligentsia or to autism researchers generally. Most autism researchers tend to be courteous but dismissive, even condescending, in responding to my concerns about the express exclusion of the intellectually disabled under the DSM5 autism definition. That exclusion will make life easier for them as researchers but do nothing to help those who display all the symptoms of autism disorders but will be excluded because they are also intellectually disabled.

Autism researchers employing fMRI's that are widely featured and profiled in current autism research will be able to continue their misleading and unethical practices of excluding the most severely challenged autism participants while pretending their findings apply across the entire "autism spectrum".  Researchers will be able to continue their exclusionary practices because their needs are being accommodated by the DSM5 team which redefines autism to exclude those persons who are too difficult to study; who simply can not be counted on to sit still underneath a machine or to answer a questionnaire.

There are, however, voices that are more difficult to ignore; be they critics generally of the DSM5 or those who specifically critique the new autism definition.  Frances, Volkmar, Ritvo, Matson are but a very small selection of the credible autism and mental health researchers who have questioned the DSM5's  new and oversimplified Autism Spectrum Disorder.  In previous commentaries I have mentioned Lynn Waterhouse's writings on the complexity and variation of autism. Her vision of autism, as I understand it (while still working my way through her recent book on the subject) is inconsistent with the simplified autism of the DSM5.

Thomas R. Insel, M.D.. Director, National Institute of Mental Health (NIMH) and Chair of the IACC has not, to my knowledge, openly criticized the DSM5 generally or the DSM5 Autism Spectrum Disorder.  On his Director's Blog in the commentary Words Matter though he offers a picture of autism that reflects its complexity not the oversimplified, streamlined DSM5 version of autism:

" ...  there are many barriers to progress, not all of them are scientific. Some involve policy, some involve poverty, and remarkably, some are simply linguistic. In mental health, we are stymied by our language. The most obvious linguistic problem can be found in our current diagnostic terms, what my predecessor Steve Hyman has called “fictive categories.” Terms like “depression” or “schizophrenia” or “autism” have achieved a reality that far outstrips their scientific value. Each refers to a cluster of symptoms, similar to “fever” or “headache.” But beyond symptoms that cluster together, there should be no presumption that these are singular disorders, each with a single cause and a common treatment. Recall that Bleuler, who first introduced the term schizophrenia over a century ago, referred to “the schizophrenias.” And with new genetic discoveries, scientists are beginning to describe “the autisms,” a group of neurodevelopmental disorders of diverse causes.

Insel's autisms, a group of neurodevelopmental disorders with diverse causes, reflects the complex, varied, heterogeneity of autism symptoms and challenges. Lynn Waterhouse in  Rethinking Autism: Variation and Complexity has provided a similar perspective, an alternative to the DSM5's oversimplified and exclusionary Autism Spectrum Disorder.

The DSM5 oversimplified  autism will probably be pushed upon us by Lord, Swedo and company. Hopefully though clinicians and researchers will not follow their lead and will instead consider the Waterhouse and Insel perspectives,  rethink the autism disorders, and embrace the varied and complex realities they present so that those who suffer from "the autisms" can be better helped to live happier,  more rewarding lives.
Posted by Unknown at 3:56 am