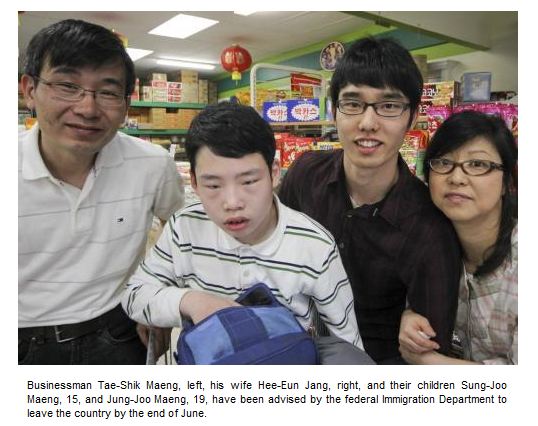 VIKTOR PIVOVAROV/TIMES & TRANSCRIPT
Canada's shameful and dishonorable conduct towards families and children with autism and other disabilities continues with the forced expulsion of a South Korean family because one of their son's suffers from autism and eplipsy.  The family operates a business in downtown Moncton New Brunswick and the oldest son has, as reported in the Times & Transcript, graduated with honors and has gone on to Dalhousie University where he studies science and hopes to become a dentist:

Here is a working, productive family being kicked out of the country after years of contributing to the Canadian economy. Before my kids were born, I taught ESL to adult immigrants who came over primarily as refugees: Cambodians and Central Americans. With the exception of a couple of elderly folks, ALL of the people I taught had jobs...ALL of them...they took jobs Canadians would not take. They were all self-supporting and contributing to Canada, trying like hell to fit in and do things "the Canadian way". Yet, immigration policies held a sword of Damocles over their heads for years with confusing paperwork and constant demands for cash. Some had been around as long as 5 or more years and were still up in the air about their status...could've been deported at any time from some bureaucrat's whim. It's appalling. It's absolutely shameful.

THIS is why ID will no longer be a part of autism. It is too expensive...and the kids are thought unworthy.

I thinked you nabbed them right in the butt on the DSM 5.

I'm sure this won't disrupt their autistic son's routine at all. Moving to a new country on short notice certainly doesn't cost money they might not have.

I truly don't see what the problem is. *Sarcasm*

When are people going to start listening? Disability and institutional care isolate individuals with disabilities as it is, but now they must move out of the country? Originally because they wanted to shut down those big bad institutions? The cure is worse than the disease, and I hope this family sees some justice. If nothing else, wherever they're going should have top-notch care. But it might not.

This family is probably paying more in taxes than they're getting in supports for their son. And worse, we have 'Canadian born' citizens in this country, with no disabilites, who are costing this country more than this family- a family that's doing the best they can with a tough situation. This is far beyond being "unfair". I can't even begin to imagine the rejection and pain this family is feeling at the moment.

I'm ashamed to be Canadian today and I hope this country does the right thing and gives them the citizenship they've been working hard to earn!!

I went to school with Jung-Joo for three years and I've come to know him as a respectful and kind individual and I expect his family to be the same. It hurts me to think that we're are taking two steps back rejecting a family because their youngest son needs medical care? These people are adding to the Canadian economy and are being kicked out when there are people all over Canada living off of EI because they're too damn lazy to work. This sickens me and like the other posts I've read I too am ashamed of our country today, this is just disgraceful and I hope and believe in my heart that someone will make this right again. This is there home. To Jung-Joo Once a Trojan Always a Trojan, no matter what happens you're part of our Trojan family and we help and stand up for our family when in need.

This is indeed a travesty. You have to wonder who is running the CIC anyway. If Harper wants to make cuts in the civil service, he should probably clean house there.

1) Should Canada throw open its doors to anyone with a chronic illness? If so ... who will pay for the influx as the world reacts to our compassion? If not ... then how do we make decisions -- what is the Immigration Policy you would implement?

2) They are here as guests and have a process to go through. We could leave them in their homeland and only let the in once they have cleared the hurdles ... OR we can let them in while going through the process but that brings a risk of deportation should their application fail.

3) It says they began their business after a few years ... I suspect that they received substantial benefit from Canada prior to that time as most immigrants do.