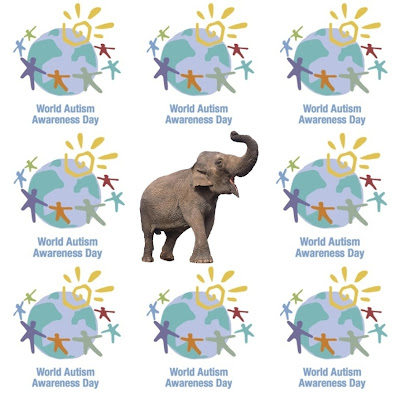 "Disabled Doesn't Mean Dumb" is the title of an Associated Press (John Curran) review of "Wretches and Jabberers" published online in the Washington Times. W and J is said to be a documentary by Tracy Thresher and Larry Bissonnette, 2 non verbal persons with autism who have been able to communicate via augmentative technologies including equipment which converts typed messages into voice communication.  The two were presumed to lack intelligence because of their inability, prior to the introduction of the augmentative technology, to communicate. Now they are sought after as speakers and field questions about autism including autism and intelligence:
"For 10 years, Mr. Thresher and his friend Larry Bissonnette, 53, have been advocates for people with autism and the disabled community at large. They are about to get a new platform for spreading their can-do message: They are the focus of “Wretches and Jabberers,” a documentary film opening in 40 cities that makes the point that “disabled” doesn’t mean “dumb.”"
The message seems to be a positive one for the most part in that they are using their life stories, and humor, to let the world know that some non verbal people with autism may be quite intelligent.   The substance of the  review though suggests that the documentary will  also assist those who wish to pretend, contrary to several credible professional reviews,  that intellectual disability is not related to Autistic Disorder as it is currently defined.  The Intellectual Disability characterizing 80% of persons with Autistic Disorder is just another autism "coincidence". The article title is not necessarily theirs but it does seem to reflect the implicit message of the documentary, as reviewed,   that it is OK to mock those with intellectual disabilities.
As World Autism Awareness Day approaches the Intellectual Disability of the vast majority (as described  by CDC Autism Expert Dr. Marshalyn Yeargin-Allsopp  ) of those with Autistic Disorder will again be pushed further and further out of sight.   After all Thresher and Bissonnette are "not dumb" and therefore all non verbal persons with autism disorders are "not dumb" ... not Intellectually Disabled.
Posted by Unknown at 3:53 am

Hi -- I get where you're coming from.

I haven't seen that doc, but would like to (I saw a trailer a while ago).

It's unfortunate that that tagline couldn't be used to encompass all disability -- 'Intellectual disability doesn't mean dumb.'

That was kind of what I assumed when I saw the trailer -- that by dumb they weren't referring to people with intellectual disability, but to the concept that anyone who is different is somehow lesser than, or doesn't have an internal life.

It's unfortunate that in journalism things get sensationalized and simplified. Let us know if you see the movie.

My son has an intellectual disability. Louise