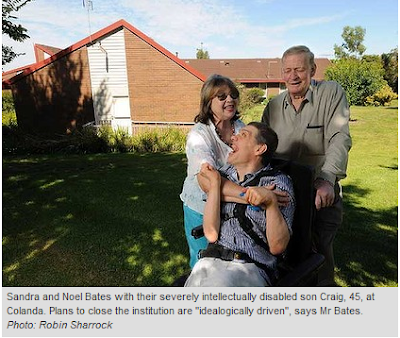 Photo and caption from www.theage.com.au
It's all so simple.  Close the evil institutions.  Institutions evil.  "Community" good.

One flew over the cuckoo's nest?.  Burn down the cuckoo's nest.  Replace it with ... "community".  But what does "community" mean?
Will the "community" provide an alternative residential facility which can  provide decent, secure living with any required treatment? Will family members of severely disabled persons with intellectual disabilities, autism disorders and other developmental disabilities be  confident in the community's  ability or willingness to provide a real, healthy and safe alternative for their loved ones residing in institutional care?.
In Australia the movement to close institutions continues as it does here in Canada but some caring  family members are fighting these ideologically driven closings.  In Relatives fight to keep centre for disabled open theage.com.au tells the story of Sandra and Noel Bates and their intellectually disabled 45 year old son Craig who resides in an institution scheduled for closure:
''The closure of institutions is ideologically driven,'' says Noel Bates, 77, president of the Colanda Parents and Friends Association. ''We're not pro institutions, we're pro better services for the disabled, including upgrading the facilities here. Colanda is 35 hectares of beautifully laid out parkland, a beautiful environment. It has newer facilities [than Kew Cottages had], better staff and processes.''
Mr Bates' son Craig, 45, suffers from Angelman's Syndrome and has, his father says, ''the intellect of an 18-month-old''. He suffers from seizures, cannot speak, or care for himself. He is unsteady on his feet and does not know his own strength when he reaches out to hug his mother, Sandra.
Although their doctors told the Bateses in 1966 to send their baby away and forget about him, they kept Craig at home until he was eight. After two years at Kew Cottages, he was admitted to Colanda the year it opened, 1976, and has lived there since.
''It was much, much better compared with what was available at Kew,'' says Mr Bates. ''It was an upmarket facility - it still is, for that matter.''
But despite Colanda's bucolic gardens, solid brick units and honourable reputation, many in the disability sector say it should be shut as soon as possible, and the residents integrated into the community, like the residents of Kew Cottages.
A 2008 report on Colanda for the Department of Human Services noted the relatives' satisfaction with the quality of care, but concluded that the routines of a large-scale institution restricted the residents' ''individual choices … and their quality of life''.
''They should close it yesterday,'' says Kevin Stone, executive office of the Victorian Advocacy League for Individuals with Disability.
''As far as I am concerned, it belongs in a previous age. The tragedy is that these are the people time forgot.''
The Colanda institution, where Craig Bates lives,  is targeted for closure even though family members are satisfied with the quality of life it provides their loved ones who live there.  The rhetoric of closure does not necessarily guarantee an alternative.  Family members of those who live within such facilities, people like Sandra and Noel Gates are motivated by concern for their family member not by rhetoric and ideology. They want to make sure that their son Craig has a decent place to live and that he will receive the care he needs. Community ideology and rhetoric does not provide the assurances they seek.
Here in New Brunswick, Canada I was one of a  group of community and government members who voted, unanimously,  at a meeting to discuss the future of an institutional facility in Campbellton New Brunswick, to keep the institution open.  I did not do so because I want my 15 year old son with autistic disorder and profound developmental delays to live out his days there after we could not provide his care.  I  voted to keep it open, as did the other representatives present, because there is currently no alternative for those severely affected by autism disorders, intellectual disabilities and other  disorders whose conditions do not permit them to live in our group homes.  "Community" cliches, rhetoric and ideology can help those who follow such scripts to feel good about themselves.  They don't provide real places for people with severe challenges to live and receive the care they need.
Close the institutions? Absolutely ... once  real and appropriate alternatives are available.
Posted by Unknown at 5:15 am

Aye, community support needs to mean exactly that. Good, proper provisions and help so that those who need it can be as independant as possible. Which doesn't mean explecting them to manage fine without suppoirt.

Harold, I am sorry to hijack your post like this, but I wondered if I could blatantly ask you to highlight the following on your blog. Westwood School, in Mold, Flintshire, Wales is earmarked for closure. It has a unit that provides ABA support and education for children on the autism spectrum. Whilst I and my lads teachers use different methods to help them, I know that the ABA unit in Mold has provided valuable help for those who have chosen to use it. The unit itself is not well advertised, many people are not aware even of its existence, which doesn't help with its current situation.
I am posting a link to the parenting forum I go on, with the relevant topic in question. I would be grateful if you could help to give this a wider audience.

I wish them luck in keeping it open. There were many families opposed to the closings of Huronia and Rideau here in Ontario...I followed it closely when they did the final push a few years ago. Those most in trouble were those with severe behavioural issues and severe combined physical/cognitive deficits. There were too many stories of "community" group homes turning these people away and/or staff refusing to deal with them (for lack of training and pay)...people whose parents felt their children were being well cared for in the "institutional" environment. Parents/guardians were left scrambling for new living situations...some residents returned to the institutions and slowed their closures. It was awful, but in the end, they closed them anyway. Apparently, it was a big money saver. I guess so, if your clientele dies or goes back home to their families. The issue of "choice" always comes up in these discussions...that there is no "Choice" for the residents. What does that mean, realistically, for someone whose entire existence depends on another and who has no concept of "choice"? They just have no clue what we deal with from day to day.