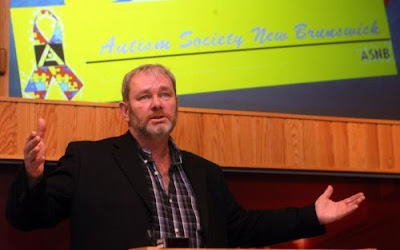 Harold L Doherty Speaking at the ASNB Meeting January 15,  2011
The Daily Gleaner/James West Photo
We had a good turnout Saturday at the Wu Centre for a meeting to re-organize the Autism Society New Brunswick which has been dormant for 2 years after making huge gains in advocating for provision of pre-school and school autism services. The recent New Brunswick provincial election focused almost exclusively on financial and deficit issues with little discussion of social or health services. There will undoubtedly be pressure to cut the autism services currently provided. to pre-schoolers and students.  On the adult front it will be very difficult to begin the long overdue task of planning and building an adult autism residential care and treatment facility in New Brunswick.  Our group homes do not have autism trained staff or professional oversight.  After that it is life in a psychiatric hospital for many of the most severely affected by autism services.  In some cases we literally ship autistic adults out of the province, even out of the country to the facility in Spurwink Maine.
In The Daily Gleaner article Group vows to fight for services journalist Stephen Llewellyn, who was present throughout the meeting,  reported on our discussions and commitment to revitalize the Autism Society New Brunswick and protect and advance autism services in New Brunswick:

"New Brunswick went from having no treatment for autism in the early part of the 2000s to having the best pre-school program in North America, said Dr. Paul McDonnell, professor emeritus of psychology at the University of New Brunswick and a clinical child psychologist with a private practice. Starting in 2004, the provincial government also spent millions of dollars putting autism treatment resources in the public school system, he said. "We've accomplished a lot here," he told the meeting. "It's phenomenal." McDonnell said he has heard of cases of people with autistic children moving to New Brunswick because the system here is so good. There are 844 persons with special training to help children with autism in the preschool and school system and seven autism resource centres across the province.
Lila Berry of Miramichi attended Saturday's meeting and strongly supported the renewal of the autism society."We will lose what we have," she warned. "There will be cutbacks." "That will happen if there is no voice." But once a child with autism leaves school there is little assistance available to families.
"We have to address issues that just haven't been addressed, like the adult care issue," said Doherty.He said there was a case in 2005 in which a 13-year-old child with severe autism had to be placed in a visitor's apartment at the Miramichi Youth Centre, which is a correctional facility, because there was nowhere else to house the young person."We haven't done anything since 2005 since that story made us notorious across Canada," said Doherty. He said New Brunswick spends hundreds of thousands of dollars per person sending young people to a residential autism treatment facility in Maine. That money could be better spent on a residential treatment facility in this province, he said. But he also said he knows it will be a huge challenge to build an autism residential treatment facility during a time of budget restraint."
Dr. Tara Kennedy, the developmental pediatrician with the Stan Cassidy Centre for Rehabilitation autism team,  was present and was asked for her assessment of autism services in New Brunswick.  She concluded her assessment with the following rating: Pre-school autism services - 2 thumbs up, School services - 1 thumb up and 1 thumb down, Adult autism services - 2 thumbs down.
Dr. Kennedy's assessment was, in the opinion of this autism dad and advocate, right on the money.  We need to work hard to protect our pre-school autism services in difficult financial times. We have to improve our school autism services and we have to begin to build our non-existent adult autism care services.
Posted by Unknown at 8:39 am