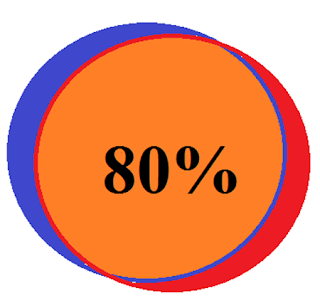 The observed rate of co-occurrence among some disorders is so high that it demands explanation. Hypotheses, which are not mutually exclusive, include the possibilities that 1) the co-occurring disorders represent divergent expressions of at least partly shared risk factors, 2) one disorder plays a causal role in another, just as nicotine addiction plays a causal role in lung cancer, and 3) disorder boundaries in the DSM system are badly enough drawn that at least some of the comorbidity is an artifact of giving one illness multiple names.
Steven E.  Hyman, M.D., Grouping Diagnoses of Mental Disorders by Their Common Risk Factors, Editorial, Am J Psychiatry 168:1, January 2011
Autism disorders (excluding Asperger's Disorder) and Intellectual Disability have very high rates of co-occurence a fact which, in the words of Dr. Hyman, demands explanation.  Even as the DSM-5 drafters move to separate intellectual disability references from the descriptions of autistic disorder it is important in the real world, it is important for the very many children and adults with severe autism and intellectual disability, that the high rates of comorbidity be explored and explained and not hidden in yet another diagnostic definition shuffle.
The 2006 Canadian Psychological Association brief to a Canadian Senate committee examining autism stated that:

• Cognitive impairment is present in about 80% of persons diagnosed with Autism and general intellectual functioning is most often below average. Persons diagnosed with Asperger’s Disorder have average to above average intellectual functioning."
The CPA figures with respect to Autism (Autistic Disorder) appear consistent with the CDC Counting Autism figures with respect to the entire autism spectrum:
"Data show a similar proportion of children with an ASD also had signs of intellectual disability than in the past, averaging 44% in 2004 and 41% in 2006."
The 41-44% figure for the entire spectrum includes those with Aspergers diagnoses who, by definition, do not have intellectual disabilities or cognitive impairment. They are also approximate the numbers provided set out in the ICD-10 for persons with respect to Childhood Autism F84.0:
"F84.0 Childhood Autism
A pervasive developmental disorder defined by the presence of abnormal and/or impaired development that is manifest before the age of 3 years, and by the characteristic type of abnormal functioning in all three areas of social interaction, communication, and restricted, repetitive behaviour. The disorder occurs in boys three to four times more often than in girls.
...
All levels of IQ can occur in association with autism, but there is significant mental retardation in some three-quarters of cases."(Bold highlighting added - HLD)
The US National Institute of Mental Health states with respect to Autism Spectrum Disorders in the section titled Problems That May Accompany ASD:
"Mental retardation. Many children with ASD have some degree of mental impairment. When tested, some areas of ability may be normal, while others may be especially weak. For example, a child with ASD may do well on the parts of the test that measure visual skills but earn low scores on the language subtests."
What is interesting about the NIMH comment is that it ties mental impairment to language disabilities, another area that distinguishes Autistic Disorder from Asperger's Disorder in the DSM-IV. An Italian study, published in the Journal of Intellectual Disability Research has expressly underlined the relationship between autism and intellectual disability:
"Abstract
BACKGROUND: In 1994, the American Association on Mental Retardation with the DSM-IV has come to a final definition of pervasive developmental disorders (PDD), in agreement with the ICD-10. Prevalence of PDD in the general population is 0.1-0.15% according to the DSM-IV. PDD are more frequent in people with severe intellectual disability (ID). There is a strict relationship between ID and autism: 40% of people with ID also present a PDD, on the other hand, nearly 70% of people with PDD also have ID. We believe that in Italy PDD are underestimated because there is no agreement about the classification system and diagnostic instruments.
METHOD: Our aim is to assess the prevalence of PDD in the Italian population with ID. The Scale of Pervasive Developmental Disorder in Mentally Retarded Persons (PDD-MRS) seems to be a very good instrument for classifying and diagnosing PDD.
RESULTS: The application of the PDD-MRS and a clinical review of every individual case on a sample of 166 Italian people with ID raised the prevalence of PDD in this population from 7.8% to 39.2%.
CONCLUSIONS: The study confirms the relationship between ID and autism and suggests a new approach in the study of ID in order to elaborate a new integrated model for people with ID. (bold highlighting added -HLD)
Surely the occurrence of intellectual disability in 80% of persons with non-Asperger's ASD and 41-44% of all persons with any ASD, a figure which includes non cognitively impaired persons with Aspergers, are high rates of co-occurrence which demand explanation. With such important relationships largely unexplored by researchers, with no explanation provided perhaps the learned members of the DSM-5 work teams should put the brakes on their plan to divorce intellectual disability totally from the Autism Spectrum of Disorders.  Lets find explanations for the high Autistic Disorder/Intellectual Disability comorbidity rates before hiding the existence of that relationship under new categories in the DSM-5  shell game.
Posted by Unknown at 8:26 pm

While I disagree that autism and ID are part of the same disorder, I do agree with you that the high comorbidity between ASD and ID warrants further research.

I hope i'm not offending anyone by jumping in with this information, being quite new to the research concerned with autism but doesn't the information in the following studies point to preformed (i.e. prenatal)anomalies in brain anatomy?

I'm full aware that there must be multiple factors involved, like my son's Ohtahara syndrome, many causes, one syndrome, but in discussing the aspect of mental deficit, it would seem likely that the anomalies described in the research indicates a partial explanation.

Autism as I know and experience it and Asbergers as I know and experience it are two different things, entirely... MR/ID/whatever the term du jour may be is the difference. Because this is essentially a defining condition, comorbidity doesn't enter into it, IMO - unless some boneheads combine Asbergers & Autism into one Dx. Right: the boneheads already did that, didn't they? Incidence rates for seizures, while statistically significant, do not define the Dx and can be deemed comorbid.

The regrouping of autsim spectrum disorders in the dsm-v makes this very confusing. I was diagnosed with what used to be very mild aspergers syndrome and am now considered autistic severity level one. However i do not have any intellectual defecits in the traditional sense i have a very unbalanced 1q. My verbal intelligence is in the 99th percentile, my perceptual reasoning is 55th and my processing speed is 16th. If you look at my full score with the exception of certain oddball low indices like visual instant recall and handwriting and such the majority of my intelligence scores are between the ninetieth and ninety-ninth percentile. My overall iq is in the 85th percentile because certain scores such as my writing, attention (i also have add), processing speed, visual recall and working memory bring it down. But it just makes it more confusing, now that all forms of autism are lumped together to truly define autism.