If you want to vote for federal assistance in providing autism treatment in Canada vote against the Conservative in your riding. Vote for the NDP or Liberal, whichever is stronger, in your riding.
A person's vote is an important matter. In casting that vote people generally consider a variety of facts, issues, platforms etc. My vote is heavily influenced by autism issues. I have already stated that I would not be voting Conservative or Green. The Conservative hostility to a federal role in dealing with Canada's autism crisis makes the Tories a non starter. The Green party has many admirable principles but has shown no knowledge of autism issues or any real concern, at the leadership and party platform level, about addressing Canada's autism crisis. The first goal of Canadians who, like me, want to see a federal commitment to addressing Canada's autism crisis, should be to defeat the Conservatives and elect as many Liberals and NDP as possible.
Both the Liberal and NDP parties have many members committed to a real National Autism Strategy, led by Shawn Murphy for the Liberals and Peter Stoffer for the NDP. NDP leader Jack Layton makes no commitment to doing anything for autism and Liberal leader Dion essentially offers only to be receptive to overtures from stakeholders. Slim pickings overall but only a government led by the Liberals or NDP, either as a majority government or as a coalition with one party supporting the other, offers ANY hope for a federal government commitment for a REAL national autism strategey, one that provides federal funding for ABA treatment for autistic children in Canada regardless of where their parents happen to live. The way to ensure the defeat of the anti-autism Conservatives and put the Liberals and/or NDP in government is to vote strategically. If the NDP are stronger in your riding vote NDP. If the Liberals are stronger vote Liberal. In this way more NDP and Liberals, and fewer Conservatives, are likely to be elected and those results will better serve the cause of autism in Canada.
Some advocates for environmental causes have already recognized the need to vote strategically. At Vote For Environment they recognize that it is necessary to vote to change the government in order to help the environment. Governments, not individual MP's, govern and legislate. The front page currently contains information setting out what would occur if voting were held today and votes were split based on party loyalty and what would occur if smart voting, voting to change the government were to happen: 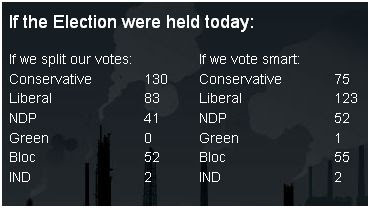 The difference between vote splitting between the two "autism" parties and smart voting for whichever party Liberal/NDP is stronger in your riding is startling. Vote splitting will result in another Conservative/Bloc alliance, the same alliance which refuses to provide federal funding for autism treatment. Voting smart, voting for whichever "autism" party, Liberal or NDP, is stronger in your riding results in a Liberal/NDP alliance and the possibilty of a real national autism policy. Both of these parties, and their leaders voted in support of Shawn Murphy's motion to amend the Canada Health Act to include coverage of ABA treatment for autism.
Elections are decided riding by riding and Vote for Environment also sets out riding by riding information to help you decide how to vote. I strongly encourage "autism" voters to check out the information for their riding and vote for the stronger of the NDP or Liberal parties in their riding. 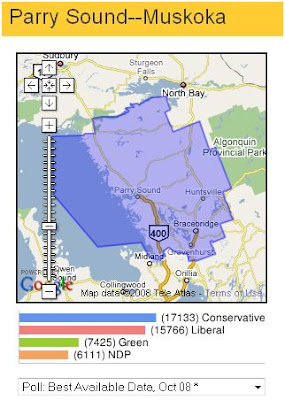 As the data indicates Conservative Tony Clement would win again if voting took place today and the Liberal and NDP votes were split. If NDP voters voted instead for the second place Liberal candidate the Liberal would win.

Oshawa is an example of a riding where the Conservative Candidate is leading and the NDP is second. If Oshawa Liberals voted NDP though the NDP candidate would likely win. One less Conservative elected and one more vote for a party that is much more likely to support a real National Autism Strategy. 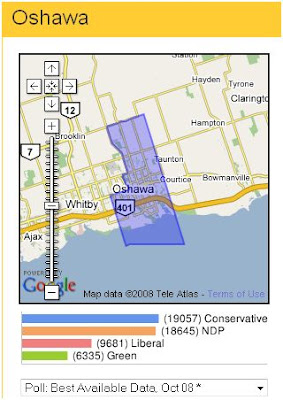 If enough strategic voting takes place across Canada the Conservative Party, which staunchly opposes federal involvement in addressing Canada's Autism Crisis, will be defeated. One or both of the Liberal Party and NDP will form the government. Both of these are "autism parties" and more likely to enact a real National Autism Strategy.