Conor, Autism and ABA from Apple to Seuss 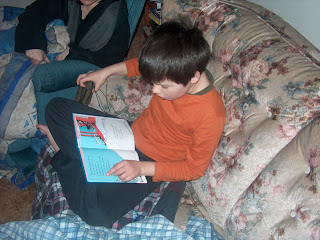 Conor was 2 1/2 years old and had NO effective speech; as in NO words at all with which to communicate. When he wanted something he would simply scream until we figured out what he wanted and provided it. An apple, one of his favorite foods, was always a good guess. Then I attended a lecture by Paul McDonnell, a clinical psychologist working with autistic children and professor emeritus (psychology). Paul described ABA and showed data charts and strategies for extinguishing problem behavior, teaching positive behaviors and elements of speech. That evening at home I tried ABA with Conor for the first time. When he screamed I showed him an apple but did not give it to him right away. I held the apple and kept repeating the first syllable until Conor, some 45 minutes later, finally said "ap". After an hour and a half Conor was able to say apple.

Since then Conor has received ABA intervention from a number of therapists, but not the 40 hours a week, between the ages of 2 and 5. Nonetheless his vocabulary and understanding of language today while still limited compared to others his age is light years ahead of where it was when we first worked with that apple. Above is a picture of Conor, with his mother, at the edge of the picture listening, while Conor reads aloud from the Cat in the Hat Comes Back by Dr. Seuss. (Dr. Seuss is his favorite writer by far).

Conor's diagnosis is Autism Disorder. His pediatrician's commentary describes him as profoundly autistic which he is. But ABA has helped him,and me, immeasurably. It has opened the world for him as language and reading does for all once acquired to any extent. And it has allowed me to communicate with my buddy. Both are priceless gifts. I thank Paul McDonnell for his many efforts on educating parents of autistic children in New Brunswick, the therapists that have worked with Conor and Dr. O. Ivar Lovaas for his incredible gift to autistic children and their parents.
Posted by Unknown at 6:57 am

I can relate. ABA ha also open many doors for my son.