Autism and Epilepsy from Facebook to Reality: Conor Experiences Another Seizure 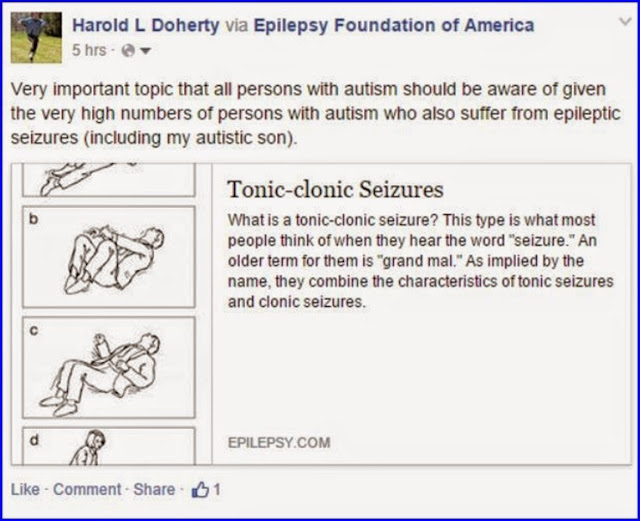 UPDATE: I had originally indicated the the persons with Conor when he had his seizure 2 days ago had not seen convulsions.  That is what I was told when I arrived.  Yesterday though I received the notes of the education aide who was with him throughout the seizure and they indicate he was convulsing for several minutes, in other words a classic tonic-clonic seizure including fall and  convulsions.

Earlier today I posted to my Facebook page and to the Autism Society New Brunswick FB page the link to Tonic-clonic seizures at Epilepsy.com.  I included the note that it was important for persons with autism to be aware of such seizures because of the high number of person who suffer from epileptic seizures including my autistic son.  A few hours later I got a call from the Leo Hayes High School and was informed that Conor had suffered a seizure. They did not think it was Tonic-Clonic although he had fallen and lost consciousness.  When I arrived he was being attended to and was sitting in a wheelchair.  He was groggy with very limited speech and needed assistance getting into the car for transportation home in the Dad-Mobile.  He was tired at home and I insisted he stay on the couch for awhile and rest.   Dad and Mom proceeded to provide the sure fire Spoil Em Rotten Recovery Treatment including supper from Papa John Pizza.

From Facebook to Reality in a Flash.  It can happen.

For a start you can consult the SFARI web site article "Risk of epilepsy in autism tied to age, intelligence"

"Children with autism who are older than 13 years and have low intelligence are at the greatest risk of having epilepsy, says one of the largest epidemiological studies on the issue to date1."
Children are typically diagnosed with epilepsy after having at least two seizures — uncontrolled surges of electrical activity in the brain. About 2 percent of the general population has epilepsy2. Most studies peg its prevalence among people with autism at 30 percent.

The new study, published 4 July in PLoS One, breaks down this prevalence by age. It finds that among children with autism, up to 12.5 percent of children aged 2 to 17 have epilepsy. The rate is largely driven by epilepsy in children aged 13 to 17, who have more than double that prevalence.

The study also found that low intelligence — defined as having an intelligence quotient (IQ) below 70 — is associated with a cluster of symptoms seen in people who have both epilepsy and autism. The symptoms include difficulty with daily living, poor motor skills and language ability, regression and social impairment. ...... "

Anonymous, you may also wish to check out the news release "Autism-Epilepsy Connection Explored in Four Studies" published on this blog site at:

Anonymous the direct link to the epidemiological study"

I am so sorry to hear about this. I hope that Conor is doing okay and all of you as well. All the best, Heather

I'd like to add that in many cases kids with autism are treated with pyschotropics for "behaviours" - which are often tied to the later incidence of seizures. Is epilepsy inherently comorbid with autism? Probably - but then again, lacking a working etiology (less attainable, now that we have a "spectrum") we'll never know for sure.

On another note, we see both grand mal and absence... and it quickly became apparent that claiming an absence seizure was a task-avoidance mechanism - for TEACHERS.

Harold, thank you for the detailed feedback. I'm not sure how one can convince their pediatrician
to look into this further until a child has a seizure. Any suggestions?