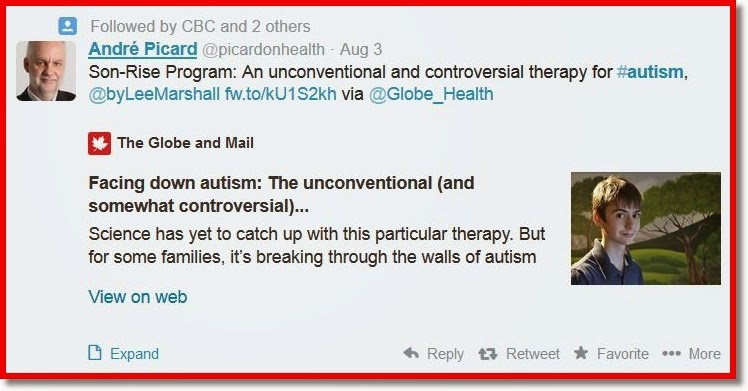 André Picard is a Globe and Mail public health reporter with the Glboe and Mail which is promoting the Son-Rise Program®, a purported autism program with almost no evidence based support of its effectiveness, a program which is not even mentioned in the recent CMAJ (2014) article or the (2007) AAP (reaffirmed 2010) autism reports reviewing the evidence, or lack thereof in support of various autism treatments.  The 2000 MADSEC (Maine) review did expressly assess Son-Rise Program® as described in my initial commentary on this somewhat startling embrace by the Globe and Mail of a weak to non evidence based autism "treatment".  By tweeting his papers opinion that "Science has yet to catch up with this particular therapy. But for some families, it's breaking through the walls of autism" Picard appears to have condoned his papers rejection of evidence based autism treatment in favor of emotionally appealing anecdotal heart tugging stories which prompt emotion to trump evidence and analysis.

Picard is entitled to his own opinions. Unfortunately his opinions reach and influence many Canadian parents whose autistic children may be exposed to the risks of lost development time if  their parents abandon evidence based autism treatment for the as yet still weakly evidence supported Son-Rise Program®.
Posted by Unknown at 6:15 pm