Election 2014: Will Severely Autistic Adults Continue to Suffer Under An Alward Government As They Have Since 2010?

New Brunswick has made progress in early intervention and student autism services but adult autistic needs, particularly severely autistic adults, have been ignored, completely ignored during the last 4 years.  The article below originally appeared during the last provincial election period posted on Tuesday, September 14, 2010.   Zero progress, absolutely zero progress has been seen in adult autism care under the Alward government.

Everyone has their priorities but for David Alward adults with severe autism disorders are not even on his list. Today we still banish severely autistic adults to the Restigouche Psychiatric Hospital in Campbellton on the northern border of NB with Quebec far from families; most of whom live in southern NB in Fredericton, Saint John and Moncton.

Community? Not for those with severe autism disorders; not in NB. I will not try to tell anyone else how to vote in the looming provincial election but if you vote for the Alward, Carr, Flemming,  Dube, Higgs government you will likely be voting for the continued oppression of severely autistic NB adults.

I would love to be proven wrong, I would love to see David Alward, Jody Carr and other Conservative politicians actually live up to their rhetoric  instead of singing community cliches and posing for photo ops.  I would love to see the Alward  party  build an autism facility in Fredericton, envisioned by Paul McDonnell, Ph. D., near the autism expertise already developed at UNB and the Stan Cassidy, a centre that could also work with enhanced group homes around the province, an autism network that would actually bring severely autistic adults into the NB community.   But I am not holding my breath waiting for an awakening in the Conservative Party of David Alward,  Jody Carr, Madeline Dube, Ted Flemming and Blaine Higgs that has acted in such disregard for severely autistic adults. 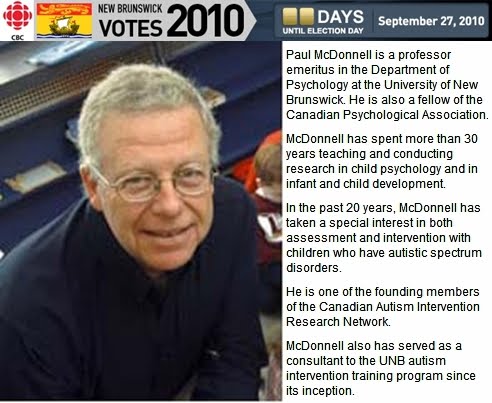 Autism expert Paul McDonnell Professor Emeritus (Psychology, UNB), Clinical Psychologist, and  a  major force behind the great progress that has been made in provision of preschool and school autism intervention and education services in New Brunswick,  has provided expert analysis of autism issues to the CBC. In two features, Paul's analysis, and his interview by CBC reporter Dan McHardie, Paul speaks about the leadership role New Brunswick has taken on in providing excellent preschool and school autism services but also points to  the need to address youth and adult autism needs including adult care residential needs as set out in the interview:

"The focus must be on education, positive living experiences and individualized curricula. The key to success is properly trained professionals and staff."
Posted by Unknown at 3:59 pm