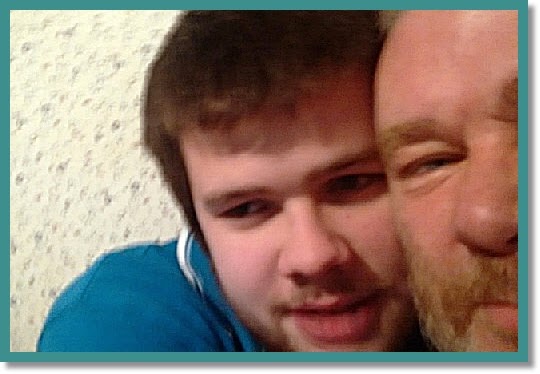 Conor Doherty on World Autism Awareness Day 2014,  as I tried to take a "selfie" of the two of us wearing blue, gave his old Dad an unexpected hug.
As in this pic, Conor brings us great joy but his autism is a disorder
which restricts his life and causes him harm.

Joel Rubinoff father of a high functioning, smart autistic son is angry  and he is using his position as an arts and entertainment columnist to tell Canadians that parents and organizations who disagree with his feel good views of autism need "attitude adjustments".  In Joel Rubinoff's ill informed view of autism  people should not discuss autism like it is a ... disorder.  They should not talk about any of the serious, sometimes harmful, sometimes deadly deficits that actually restrict the lives of many with autism disorders, a group of neurological disorders marked by heterogeneity, complexity and variation. (See for example, Lynn Waterhouse, Rethinking Autism: Variation and Complexity).


Autism for Joel Rubinoff is Temple Grandin, Darryl Hannah, Einstein, Mozart, Bill Gates and Susan Boyle.  Forget for the moment that Einstein and Mozart lived and died before autism was a recognized disorder and that any speculation that they were autistic is exactly that ... speculation.  Rubinoff, like any of the autism is beautiful crowd that have fought against recognizing the harsher realities faced by many on the autism spectrum of disorders, likes to equate his son's autism with very smart, talented people.  Rubinoff's son is, by Rubinoff's evidence, very intelligent and  high functioning with good communication skills:

"But did you know that half way through senior kindergarten, he's already learning to read. That he can do puzzles with almost 100 pieces. That he's fascinated with space and science, and can name all the planets. That if you tell him it's Hot Dog Day at school he'll squeal with delight. "I'm so excited, Dad — I can't wait!"

Mr. Rubinoff appears to be unaware of sources like the World Health Organization which, in September 2013,  stated that approximately 50% of persons with an autism disorder also have an intellectual disability. Joel Rubinoff may not realize that many autistic children are prone to wandering and some lose their lives as a result. Some engage in very serious self injurious behavior as my son has done at times.

If Mr. Rubinoff doubts what I am saying I would be happy to take the time to provide him with sources pointing to the very harsh realities facing many on the autism spectrum of disorders ... if he would start acting like a reporter/journalist and read and report to Canadians that autism is far from being about undiagnosed historical geniuses.  Nor is it only about actually diagnosed, highly intelligent children like his son.  For many including my son Conor Doherty, autism is a complex, serious disorder.  I love my son dearly and I know, contrary to Mr Rubinoff's "reporting" that my son's life is very restricted  and his future as an adult whose parents will not always be with him is very bleak.

(For Mr. Rubinoff's benefit I am the father of a severely autistic son and I have been involved in autism advocacy for 15 years in New Brunswick where, together with fellow parent advocates, we were able to establish a model early intervention for autism program, obtain some autism educated Education Aides and Resource Teachers, and successfully fight the closure of the Stan Cassidy Centre Autism Team which treats and helps many children and young people with serious autism disorder issues, the kind of issues Mr Rubinoff appears to be unaware of.)
Posted by Unknown at 9:27 am

Greetings from Montreal, Quebec, Canada. People are quick to look at the negative in things and people much more quickly than the positives, and I think this is sad. Take Temple Grandin for example. She has autism but has done so much with her life! People need to look at the person and their ABILITIES, not their DISABILITY.

Linda, thank you for you comment. I am not sure if you actually read my commentary or not or if you read my blog comment which I provided a link for under the lead off image of my son and I.

My son was diagnosed 16 years ago at age 2 years + 1 day. Temple Grandin had published at that time and was inspirational. Grandin is a very high functioning person with autism but her case is not comparable to my son's who is classically low functioning ... severe autism, profound intellectual disability and seizured which almost cost him his life.

Autism disorders for many are very serious with serious, harmful self injurious behaviors, dangers tendencies to wander into traffic and into waters where tragic results can occur. My son is also very sensitive to specific sounds and can meltdown in response to unexpected changes in routine.

Making positive, misleading statements about autism disorders does not help those who actually suffer from them. Positive action can including the early intervention and autism specific school services for which I advocated along with other parents. Autism specific residential care facilities are also necessary but are a much harder object to achieve.

I am happy you care enough to comment here. Please feel free to read my posts on this blog site about the REALITIES faced by many with severe autism disorder. And please do so with an open mind.

Linda, yes their abilities are wonderful when you sit now at 14 and wonder how you are going to get a kid to study who gets straight A's and doesn't. Yes, I know at age 8 the paperwork read "ID" and we're anything but now...

He's not the norm. He's not the disabled one. The one that can out read most 12 yr olds, can out puzzle a 15yr old and is finishing Gr 3 math... is. He's the one who's adaptive functioning is that of a 5 to 7 yr old and his speech is that of about a 2-3yr old. He's also added hand biting to his hand wringing (which he's twisted his fingers permanently) with puberty.

Autism is not a difference... Yes, my youngest is amazing and no longer ID... but he's severely disabled. I won't allow my eldest to claim to be "autistic" because he no longer is, nor is he, disabled.

Here's to hoping the V puts the "normal" kids into "social communication disorder" instead.

I agree with you Harold. I am so sick and tired of people ignoring the realities of severe autism. Sadly the guy who wrote this article is increasingly becoming the voice for portraying what people think autism is. People seem to fail to look at the other side and display the facts of those who are struggling every day with a child on the severe end of the spectrum.

In Massachusetts we (unfortunately)have Jessica Wilson who rambles on multiple times a day about her daughter Kendall and writes just how awesome autism can be. Her child is mildly affected. Wilson will never speak for my child yet this is what thousands are listening to. This man appears to be a clone of her. They could care less that they are downgrading what our kids are really go through by continually pleading with people to celebrate autism. I really wish these jerks would shut their traps. It does nothing but harm IMO.

I wonder if we are starting to see very beginning of a change in the neurodiversity movement.John Elder Robinson spoke twice at the recent IACC meeting.The first time was to give an extended plug for his neurodiversity program at William and Mary.Robinson was clearly pleased that the increased autism numbers were at the higher end of the spectrum.The second time Robinson spoke was after the families told their stories.Robinson said something very interesting,that I never heard from anybody like him.Pretty much restating that autism needs to be taken apart.He said that the divide between the very high functioning and those with either autism and ID,or regressive autism with seizures and medical issues is too great.That we need to stop acting like these different types of autism are the same thing,especially as far as research is concerned.

This may be something Robinson has come to realize only fairly recently.I had never heard him say this before.

While we163 may not agree on anything else,I would like to see everybody involved with autism get behind this one point.

Autism is a strange condition. It can include both Conor and Joel's son. Separating both by high and low functioning creates nothing but confusion.
Joel's son has a slight social imparement. Conor is almost completely socially blind and has multiple conditions.