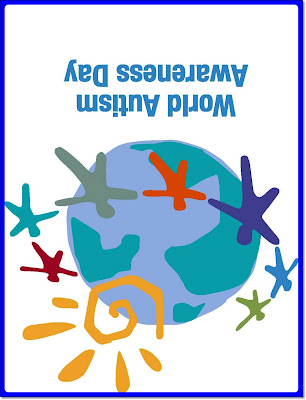 If past is prologue very little awareness of the harsher realities of autism symptoms will be generated on this WAAD, April 2, 2013.  Next year, in 2014,  and for years thereafter, the streamlined DSM5 autism will also eliminate many on the very high functioning and low functioning ends of the autism spectrum.

It is unfortunate that in the DSM5 Autism Spectrum Disorder definition the American Psychiatric Association is revising the medical definition of autism spectrum disorder in ways that are expected to change its diagnostic characteristics. There is no good reason to wreck havoc on autism research and diagnosis by redefining yet again what we are talking about when we say "autism".

The autism disorder picture, already muddied and muddled by "self" advocates and others who promote autism as a blessing,  will have even less real meaning as the APA, without any scientific or ethical reason, eliminates the most severe cases of autism from future diagnosis. Autism research, already challenged by previous DSM definition changes and alleged increased awareness, will become increasingly challenged.

The actions of the APA in redefining autism in the DSM5 reflect the intellectual biases of the APA drafters, are in breach of the "first do no harm" principle and  are unethical. Be aware of that on this World Autism Awareness Day 2013 and prepare for a new autism on WAAD 2014, one that will look much different than the autism about which the world is expected to become more aware today.
Posted by Unknown at 4:25 am

Did you see what they posted on TPGTA this morning... It's truly and excellent idea to insult those that will supply the funding, the services and have to work to pay their disability monies.

We started our awarness celebration at 1h30 am this morning, to take advantage of as many hours of autism awareness day as possible (or I presume that is why my son would not sleep, again). We have been painfully aware of autism for 11 years now. It is not a gift, not a joy and not as seen on TV. We will not light it up blue today, the only blue my husband and I are wearing is from the bite mark, pinch marks and other injuries the joy of autism has brought our family. I love my son, but not his autism. So I will spend today educating others about the real realities of autism.

I agree. Thanks for this. When I read blog posts like today's post from Diary of a Mom on how we should celebrate autism I literally want to be sick. It's too bad voices like hers stand out and people fall for that load of crap. "Advocates" (and I use that term very loosely)like her really have no clue what it is like to deal with severe autism yet they ramble on and on every single day and society ends up believing autism is just about laughing, parties and wonderful vacations with a quirky child.