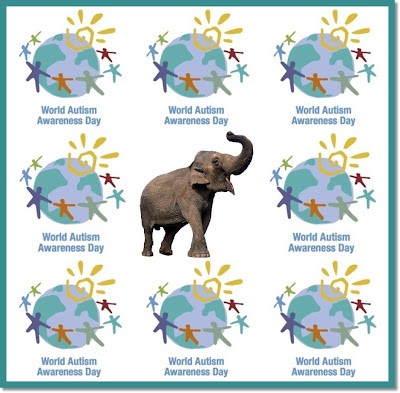 Intellectual Disability remains the Elephant in the Autism
Living Room;no one wants to admit it's there or to talk about it

It is politically incorrect in today's autism world to acknowledge the existence of the invisible autistics, the one's unlike Ari Ne'eman, John Elder Robison, Alex Plank and  Michelle Dawson all of who whom have enjoyed great success and demonstrate considerable intelligence and most of whom have never met a television camera or gathering of journalists that offends them. Some of the extremely high functioning superstars of autism "self" advocacy have literally built careers telling the world what it means to be "autistic".   Meanwhile those with intellectual disability who constituted autism's "vast majority" prior to the DSM-IV expansion of the pervasive developmental disorder category to include Aspergers remain invisible and unmentionable in polite, successful autism circles:

"But the autism umbrella has since widened to include milder forms, says Dr. Marshalyn Yeargin-Allsopp, a medical epidemiologist at the CDC. For example, it now includes Asperger syndrome, where the sufferer is socially impaired, but experiences typical language development.

Against that background I must give some slight praise to Autism Speaks for daring to mention, albeit hidden deep in  the FAQ section, carefully book ended by reference to autistic savant skills and those with normal to above average intelligence, that, Oh My Gosh,  40% of persons on the autism spectrum have an intellectual disability:

What Does it Mean to Be “On the Spectrum”?

Each individual with autism is unique. Many of those on the autism spectrum have exceptional abilities in visual skills, music and academic skills. About 40 percent have intellectual disability (IQ less than 70), and many have normal to above average intelligence. Indeed, many persons on the spectrum take deserved pride in their distinctive abilities and “atypical” ways of viewing the world. Others with autism have significant disability and are unable to live independently.

Autism Speaks, like the APA committee that drafted the DSM5 autism criteria to exclude the most severely intellectually disabled from an autism diagonosis even if they meet all the specific criteria for an autism spectrum disorder, does not wish to openly speak the truth: intellectual disability is not just a co-morbid or coincidental disorder that just happens to be present in the vast majority  of cases of classic autistic disorder. It is for the original vast majority a description of their  developmental deficits, while those with Aspergers do not have intellectual or language deficits most of those with Autistic Disorder do.  The intellectual disability is a feature of their autism disorder whether extremely high functioning Aspergers self advocates, fund raising entities like Autism Speaks or even the APA wish to acknowledge it.

There is no reason to artificially separate the intellectual disability from the "autism" symptoms.  There is no scientific basis for doing so and it is morally and ethically wrong to do so.

It is scientifically unsound to hide the reality that intellectual disability is an integral part of autistic disorder.  It is just as immoral and unethical to hide that reality, to pretend that intellectually disabled are not truly autistic as it would be to pretend that persons of different racial, gender characteristics or sexual orientations do not count as full human beings.
Posted by Unknown at 5:04 am

10%,or less,are in the "other" category,like I am,and have mitochondrial or some other type of inborn metabolic disease as a proven cause of their autism.

10%,or less,are in the "other" category,like I am,and have mitochondrial disease,or some other type of inborn metabolic disease as a proven cause of their autism.