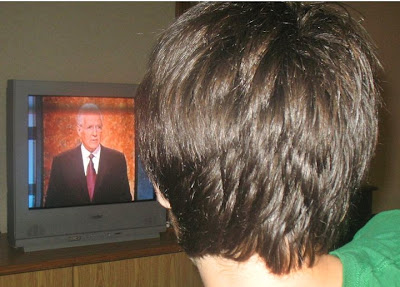 Conor relaxes and watches some television with the Host of Jeopardy .... Alex Trebek .... and  Mom and Dad .... in motel room during a visit to grandparents in Nova Scotia.  Conor was diagnosed with autism 13 years ago at the age of 2.  The symptoms that prompted us to seek medical attention which ultimately led to an early diagnosis for Conor appeared long before he ever watched television.
India has contributed much to humanity over the centuries and is growing today as a world economic powerhouse.  Unfortunately it also appears now to be pushing as fact the myth that television causes autism disorders.  The Times of India quotes several autism "experts" and reports their opinions that television causes autism in 1 in 60 kids suffer from autism spectrum disorders: Experts:
"CHENNAI: Watching television for hours and not interacting with parents or other family members is pushing more children into the bandwidth of autism, say experts. From one in 1,000 children two decades ago, one in 60 children are now showing symptoms of Autism Spectrum Disorders (ASD), such as poor social interaction and bad communication skills, said consultant paediatrician at the Sundaram Medical Foundation Dr Shanthi Raj.
Experts say that while autism itself is biological, the other disorders in the autism spectrum, such as bad communication and social interaction skills, can be because of changing lifestyles and rapid advancement in technology. "Autism spectrum disorders and features are caused by environmental factors like being a single child, having no one to interact with, watching TV endlessly and not playing with children," said Shanthi Raj. The difference between autism and ASD is the severity of the symptoms.


With more children being left alone or in the care of maids, they end up watching television where communication is only one way, leading to ASD symptoms. "Children today are exposed to too much stimulation, too much information and such instrumental-based stimulation in the form of TV or computer and video games can be harmful," said Shanthi Raj.
Treatment of ASD involves inducing behavioural changes by changing the environment. Experts ask parents to constantly communicate with their children, encourage peer group interaction, and cut down on TV. The Indian Academy of Paediatricians recommends that children below the age of three should not be allowed to watch television."


The Times of India report does not provide any studies or journal discussions in support of the views of the Indian autism experts.  Hopefully credible American authorities who have contributed much to our understanding of autism here in Canada over the last decade and a half can reach out to autism experts in India and prevent another autism myth from growing in one of the great nations of the world.
Posted by Unknown at 2:44 am

Looks to be a bandwagon they are jumping on, equating sociopathic behaviour with "autism spectrum disorders". Do you really believe there is a place for such a term (ASD) in the medical model of Autism? Regardless of the supposed connection with TV the trend in popular media seems to me to be creating an ever widening circle to encompass all kinds of behavioural abnormalities. This would seem to be damaging to those truly suffering autism

What a load of bunk. Alanna has never been interested in TV except when she was very young. While I agree watching TV should not replace socializing, linking it to ASD without any evidence is dangerous.

These quacks should be ashamed of themselves. Their expert position brings high obligations they have to meet. Instead, they tell publicly the first nonsense coming to the top of their tongues. God knows how many Indians they will mislead.
To me, this is a new version of refrigerated mother theory. You are to blame for your child's autism, because you let him watch TV. Who can hope seriously without any evidence that a disability could be prevented or cured by depriving vulnerable children of the little pleasures of life? What utter nonsense!

I actually like the theory and what harm will it do if parents stop putting there kids in front of television, video games, and computers. Has anyone proven that television doesn't cause autism or social issues? There is a reason that the American academy of pediatrics recommends no television under the age of 2. Despite this recommendation most babies are watching quite a bit of television. How can we assume its not affecting their development.

Yes i strongly believe this. My son watched tv since he was about 6 months. He was actually not diagnosed by a doctor until i brought it up. They were very impressed i caught it early. He said he had a very mild case. "Developmental Delays"I noticed he was very behind for his age. I didnt know very much about it til i searched on the internet. He had all the symptoms: arm flapping, playing with toys in an unusual manner, spinning in circles, tantrums exc. For some reason i felt the tv was the problem. When he would watch tv it was like was hypnotized or kinda like in a trance. It was then i went on youtube and searched: autistic child. I kid you not 90% of thoses children were stuck in front of the tv, if not the tv was on in the backround. I was stunned. I immediately took the tv away from him for good. I say it was around 13 months. I noticed his improvement within weeks. He is now 17 months and doing so much better. I just look at it like he is just a year behind or so. I was lucky to catch it early enough because i am in control. He is not old enough to be able to tell me "dad, i want to watch mickey mouse" or "dad i want to watch tv" Children with autism are usually diagnosed at around 2-3 years old. By that time they know what it is and what they want. It doesnt help that autistic childrn throw tantrums. I have seen videos on youtube where children are screaming bloody murder and they will no stop unless they have their tv, computer, video games..all very harmful. I understand it is overwhelming for the parents so what do they do?? Turn it on, give em their way to shut them up. Its hard to deal with as a parent when some of us put on cartoons because it makes our baby happy. While others just use the the tv as an electronic babysitter. Whatever the case, dont kill yourselves over it. Just worry about moving forward. TAKE IT AWAY!

I'm convinced this is the cause. I predicted it in a child I know who only watches TV and never plays outside or with other kids. Parents of autistic children seem reluctant to admit that it could have been prevented, I see no real evidence this isn't the cause. Also it would explain the higher prevalence in boys, they are typically more high energy, causing parents to rely on TV more. I really don't care what parents of autistic kids think, I'm just here to warn parents about the risks of TV in infancy.