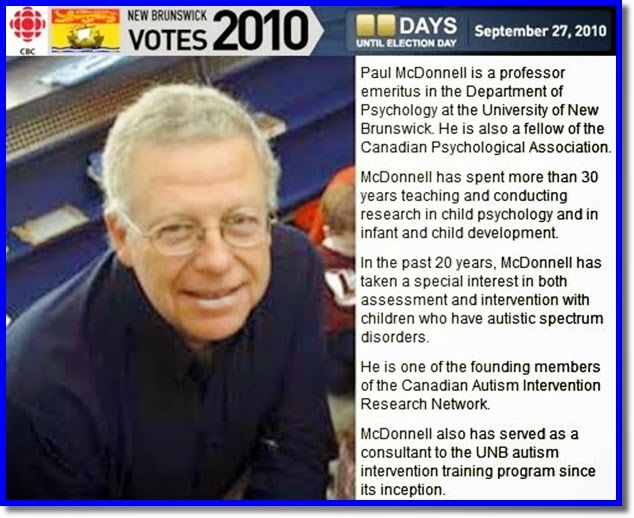 During the  2010 New Brunswick election  Dr. McDonnell, as noted above, was interviewed by CBC on the subject of adult autism care. The interview and analysis posted on the site are no longer available online but he stated at that time (bold highlighting added by me):

The autism residential care and network system described by Dr. McDonnell was raised with the parties during the 2014 election.  The Green and NDP parties responded positively to the matter with mentions in their election platforms.  The Liberal and Conservative parties ignored autism issues entirely so there is no reason to assume that the currrent Liberal government will address the needs of  New Brunswick's autistic adults particularly those with severe autism disorders and co-morbid conditions like my son Conor who will probably be forced to live out his life in the Restigouche Psychiatric Hospital in Campbellton's in NB's northern border with Quebec.  All the community cliches in the world will be of no assistance to my son and other severely autistic adults most of whom will be living many hours drive from their families.

It is not clear for the reasons that follow why the government of New Brunswick has refused to addressed the serious health and residential care needs of autistic adults.  The usual suspects have been:

The network described above by Paul McDonnell could actually have resulted in government cost savings. Some of NB autistic adults have been sent to Spurwink Maine for many years at costs of several hundred thousand dollars per year per person.  With the current Liberal government dedicating millions to capital investment during its election term it would be a good opportunity to build the autism centre referenced by Paul McDonnell a centre which could provide quality residential care for those in need of such and professional expertise and oversight for community autism homes and assisted living environments around the province.

2.  The Taboo Against "Institutions", "Centres", "Bricks and Mortar"

In New Brunswick various groups and individuals have persisted in  repeating community cliches like "no bricks and mortar" when various special care needs are raised. (To my knowledge ALL of these individuals live in bricks and mortar buildings). These same people simply ignore the evidence that their total faith in undefined community solutions has not addressed the needs of autistic adults in NB.

In the autism context a meeting was held several years ago with Ombudsman and Youth Advocate officials Bernard Richard and Christian Whalen.  I attended in the company of NB autism expert Paul McDonnell.  McDonnell's proposal for an autism center and network was raised with these gentleman, neither of whom has any known autism expertise, but was quickly dismissed, and not discussed in any meaningful way, by Mr. Richard or Mr. Whalen.  Mr Richard was interviewed recently on CBC when the government announced funding for a youth complex needs centre.  Mr Richard, of Moncton, once again, voiced the "no bricks and mortar" cliche before advocating for Moncton as the best location for a youth complex needs centre.

There are in today's world existing examples in other areas of mental health care which could be borrowed to develop the physical structure necessary to accommodate residential care and treatment needs of autistic adults in a way that would allow for a range of environments to accommodate those with greater liberty needs and those with greater security, assistance and health care needs. The Hogeway dementia care village facility is one such example which is receiving world wide recognition.

The costs and and community concerns would in fact be addressed by the autism network described by McDonnell.  Such a centre would see monies being spent constructively in New Brunswick which would save monies spent  outside New Brunswick and would provide New Brunswick autistic adults with residential care and treatment in their communities for those who are capable of living in a group home or assisted living environment and in a centre in Fredericton near the autism expertise of UNB, UNB-CEL and the Stan Cassidy Centre for those requiring permanent residential care and treatment.  Fredericton, an increasingly bi-lingual city, would also be able to provide centre services in French and English as demonstrated by the UNB-CEL autism intervention training program.  The UNB-CEL autism program has received international recognition as  a model early intervention program for training autism support workers and clinical supervisors and has done so in both French and English.  (The Universite de Moncton was asked to participate in the initial stages of developing the UNB-CEL autism program but for reasons unknown to me declined the opportunity to participate and has developed no similar program).

The need for an adult autism care network can not be denied in New Brunswick.  With an estimated  population of 11,000 New Brunswick'ers with autism many are also adults living in a hodge podge of arrangements without badly needed professional oversight or assistance.  Others have been  sent to a variety of institutional care settings.  Some well known cases are the autistic youth living on the grounds of the Miramichi  youth correctional centre (2005) before being sent to Spurwink Maine, the adult who lived at Centracare (2003) before being sent to Spurwink and those who have resided, and continue to reside, at the Restigouche Psychiatric Hospital on the Quebec border far from most families in southern-central NB. Unconfirmed reports indicate that some autistic adults have lived for periods of time on general hospital wards.

It is time to save money, provide assistance and positive, meaningful life development to those autistic adults who can not function independently in living accommodations near their home,  AND extend their life expectancies.

It is time to walk away from the addiction to cliches while shipping autistic adults to locations far from families.

It is time, it is long past time, since the events in 2003, 2005,  to seriously address NB adult autism residential care and treatment requirements and build the  autism network envisioned by NB autism expert Paul McDonnnell in 2010.
Posted by Unknown at 12:22 pm

Here in California USA we have this idiotic stance against institutional care both group homes and developmental centers (look these up on google with key words California and disability). I am a legit high functioning autistic that harbor regional center denied a group home to due to the fact I am to high functioning the HRC was not caring about my numerous sometimes life threatening health problems even tough I requested a group home of my own volition. As for developmental centers California are closing them left and right letting out those who are dangerous to hurt other disabled persons as well as those too sick and disabled that cannot care for themselves at all and then they die in less restrictive group homes.

One of the biggest problems facing adults with autism and epilepsy and self abuse is that countries don't understand this population, because they are still under the impression that autism is the rain man and are others who aren't really autistic.