Our Happy Conor is Back! And Dad Is Happy Too! 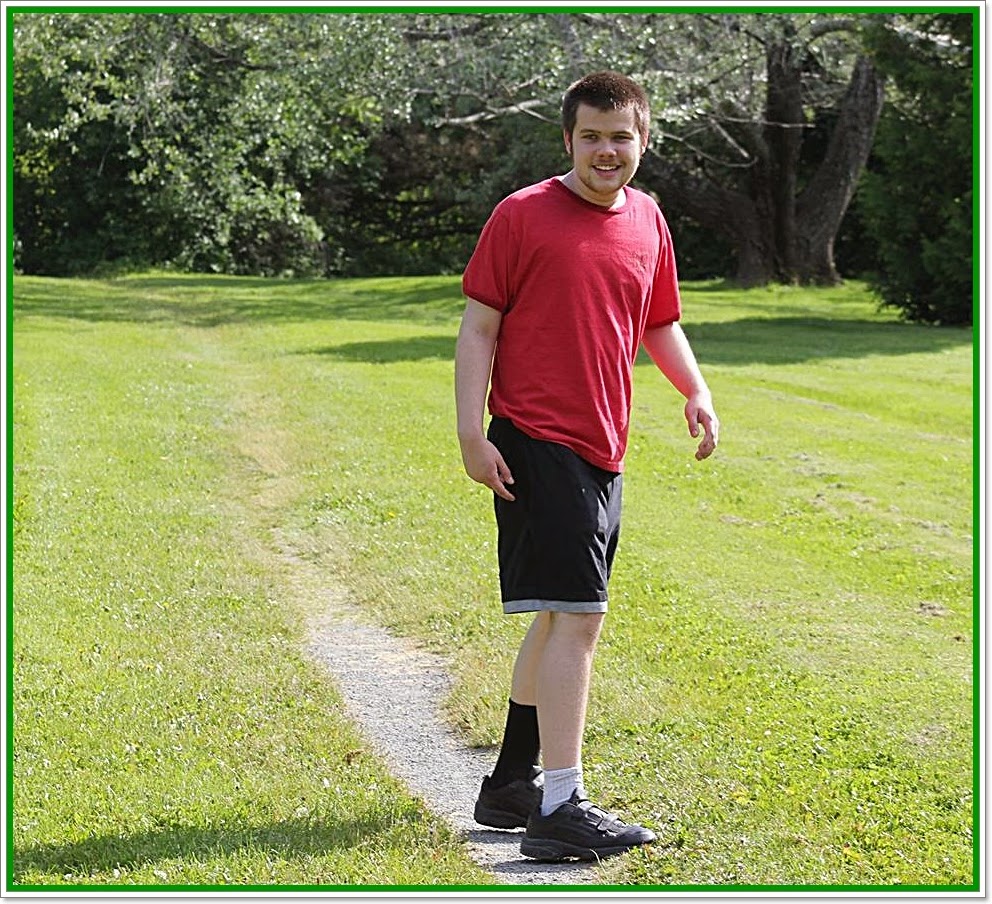 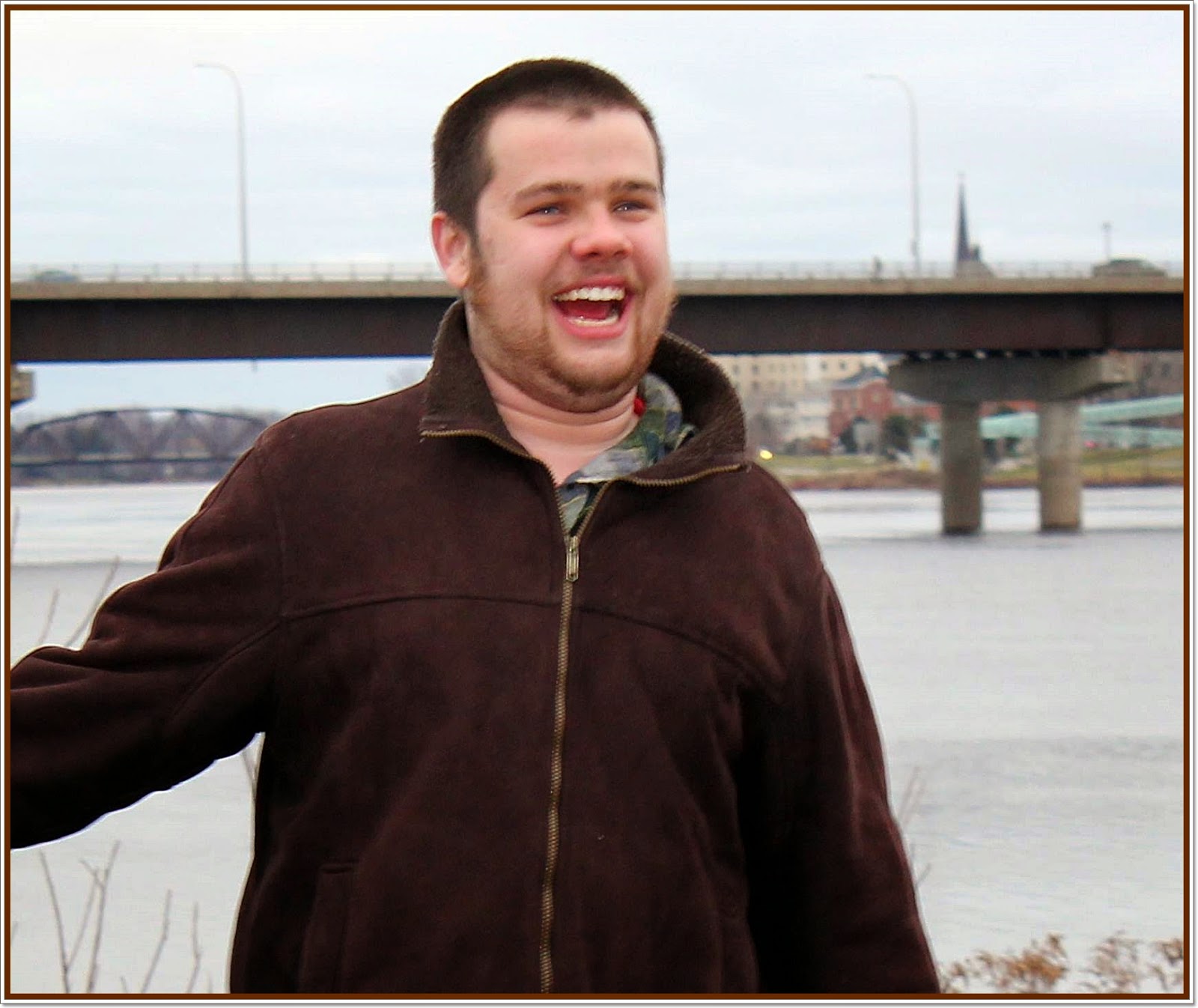 The top photo above was taken a year and a half ago,  shortly after Conor recoved from a very serious adverse reaction to his seizure med at the time, Lamtrogine, which resulted in two weeks in the hospital including an emergency room visit and 6 days in the ICU where the excellent medical team there, including our family doctor, probably saved his life.

The second  picture above was taken a few months ago, shortly after Conor started a second medication, Divalproex, after which he became agitated.  I was able to get him outdoors walking at the time which seemed to help. I second guessed myself at that time and continued with the Divalproex despite increased agitation.  A number of weeks ago Conor's Divalproex was increased as per the Neurologist's direction and things have been brutal for Conor since then.  I had to bring him home from school twice because he was aggressive with staff.  He was very aggressive at home with his mother and with me.  He was most aggressive though with himself smashing his head with both hands dozens of times a day.

A week ago I began decreasing Conor's Divalproex meds and he has been off of that medication entirely for a few days.  The result has been positive with his aggression and self injurious behavior dropping sharply and the last couple of days being joyful again.

I am not criticizing the Neurologist, nor am I making a generalization about Divalproex or offering
medical advice.  All I am saying is while on Divalproex Conor suffered with increased Divalproex resulting in increased self injurious behavior and aggression.  The school staff were kept in touch about the medication issue and the withdrawal schedule and noticed the same patterns including the recent return of our joyful, happy Conor.   I won't jump to any big conclusions or assume things will never get bad again but I will say that .... today ... Conor's Dad is one happy camper.
Posted by Unknown at 9:51 am

Which is why the medical community must listen to parents, who are most in tune with their children...

Sadly, trying to find effective seizure meds is somewhat like playing a form of Russian roulette. I am thankful my gal does well on a bit of good old Valproic Acid and a tiny bit of Clobazam. Hope you can find a good balance for your young gentleman soon. (Teen years are the hardest, that's for sure.)

My autistic son was on depakote for years. There was always the suspicion that by first taking it, it caused so many side effects that it led to self injurious behavior. Then, one day, after years of taking this drug, he suddenly developed hyperammonia, which led to the most savage self abuse we've ever seen. Depakote is the worst drug for individuals with autism. It is most baffling why drug manufacturers and autism researchers have still not exposed why depakote is one of the worst drugs for autism and epilepsy. My guess, from what I've seen with our autistic child, is that this drug causes extreme stomach upset in autistic individuals, and as such leads to self abuse.

Both of my children, girl and boy, with autism were on a plethora of anti seizure medication and mood stabilizers. And each time a new behavior raised or a different seizure showed, they either upped the dosage or tried a new medication. Felt like I signed up my kids to be guinea pigs and I was just the tester administering all these new drugs. Meanwhile the mad scientists behind the pharmaceutical desks think of new drugs that may or may not help a child but more then likely have nasty side affects. This was my life in a nutshell. I had my children's neurologists on speed dial, next to schools, hospitals and insurance companies. Occasionally I used the phone to call friends and family.

For many years I lived the lifestyle of drugging my children for the necessary need to keep them alive. Even if it meant one of them would suffer kidney disease or the other would develop a thyroid condition leading to some nasty behaviors. I had to keep their behaviors contained. They had to be able to attend school and not attack their schoolmates or teachers. Had to have them sleep at night so I could "survive". It was crucial this all had to happen. I look back at those days and just wish I went down another route. My children are 26 and 23. Both extremely compromised by medical conditions developed from the side affects of certain behavioral and anti seizure medication. Doctors just look at what's in front of them and automatically diagnose without truly digging to find out the exact problem. My daughter had a vitamin b deficiency that caused seizures. My son had a genetic condition causing autistic features, seizures and a movement disorder. This particular condition was caused by a missing protein. Also a unusually high potassium deficiency that mimicked colitis disease. It's like you have to be not only their voice and advocate but their nurse, doctor, and behavioral therapist. I fought real hard to find these small medical discoveries. We are now finally on the right track to keeping both my kiddos alive but without the extra side affects that go along with it. Keep digging. I'm sorry you had to go thru this. It's disgusting how doctors just do the bare minimum these days.