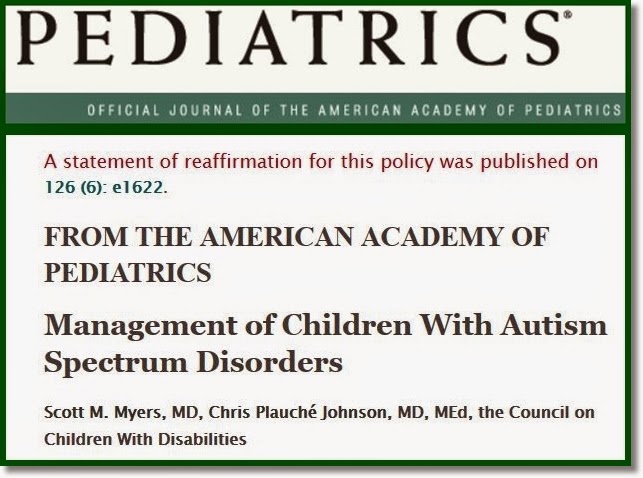 
The above information from the American Academy of Pediatrics, Management of Children With Autism Spectrum Disorders,  autism policy statement 2007, reaffirmed 2010, makes it clear that the challenges facing those with severe autism and their families includes substantially higher costs and increased mortality.  Some  very, very high functioning autistic persons like Ari Ne'eman, John Elder Robison and others make careers lecturing government, media, professionals, even institutions of higher learning, about autism and dictating how society should see and deal with all autistic persons, including the severely autistic with whom they have so very, very little in common. The result is a lack of attention to, and provision of services to, meet the  short and long term needs of those who suffer from,  severe autism disorders.

For many high functioning  autism self advocates, having received an Autism Spectrum Disorder diagnosis, they no longer consider autism to be a disorder.  They are reinforced in their irrational denial by mainstream media who love to publish autism feel good stories. References to Einstein, Van Gogh and every historical talent and genius you can think of routinely include mentions of suspicions that they were autsitic although they lived before autism was recognized to exist.  Charities seeking to maintain their charitable tax status and otherwise ingratiate themselves to governments and donors like to emphasize the "positive" and in some cases actually attack parents who speak honestly about their own children's severe autism disorders.  In all these cases those like my son who live on the severe end of the autism spectrum of disorders are invisible.  For the invisible severely autistic  the only times they are even mentioned in the media is when tragedy strikes, when a child wanders from home to nearby swimming pools, lakes or busy roadways.  Otherwise, they might as well be literally invisible. Their needs will not be addressed. Even mention of their severity, even the concept of severity will remain verboten.

One necessary first step is to reverse the serious DSM5 mistake of combining, with no evidence basis, the various pervasive developmental disorders into 1 Autism Spectrum Disorder so heterogeneous in nature it makes the new ASD a useful tool for continuing the historical trend  of   "autism" studies of high functioning autistic subjects that at the same time exclude the severely autistic.  The new ASD  also gives legitimacy to the very, very high functioning career autistics who, with the mainstream media and money seeking charities, suppress knowledge of severe autism realities and with that suppression contribute to societal oppression, by ignorance, of the severely autistic.

I will speak out and condemn, as long as I am alive, the suppression of the truth about the realities faced by those with severe autism disorders and their  families.  It may not make a difference in the upside down, distorted world of  autism "awareness" but I will try  anyway.  I owe it to my severely autistic son to do so.
Posted by Unknown at 12:26 pm

I'm with you 100%... but would add that I do it not only for my son, but also myself. The "Spectrum" has led to a resurgence of 'blame the parent' scenarios, for example: many programs will accept people with autism - and loudly trumpet their accommodating nature, until they are presented with my son (I describe his Dx as "we ain't kidding autism"). I am told his lack of program access is due to lack of effort on my part, after all, there are so many programs working with autistic people now. Feh. Or, how about the people who know someone with a high functioning kid, who tell me the reason my kid has "issues" is because I haven't used the (fill in the blank) alternative treatment paradigms. Perhaps being labelled a refrigerator mom by Bettelheim was better - in these instances the implication is that I don't care, and won't do what is right for my child...

Harold, I agree with your comments about so-called high functioning autistics but I also believe that if you removed those with people and others with "mild autism" from the diagnosis then the media and government would lose all interest and our children would be just as invisible as now and more so, as are other individuals with developmental disorders. Autism is the only diagnosis that gets real funding for early childhood intervention, why is that? I believe it is because of the perception that autistics have a potential that those labelled with intellectual disability or genetic disorders do not because of this notion of the autistic savant or the child who "emerges" from autism perfectly normal. At its heart, the focus on the the high-functioning autistics is just a reflection of bigotry that exists against all of those who are not "normal" and never will be. That bigotry is the reason our children are invisible.