More Science in Support of ABA Effectiveness for Autistic Children 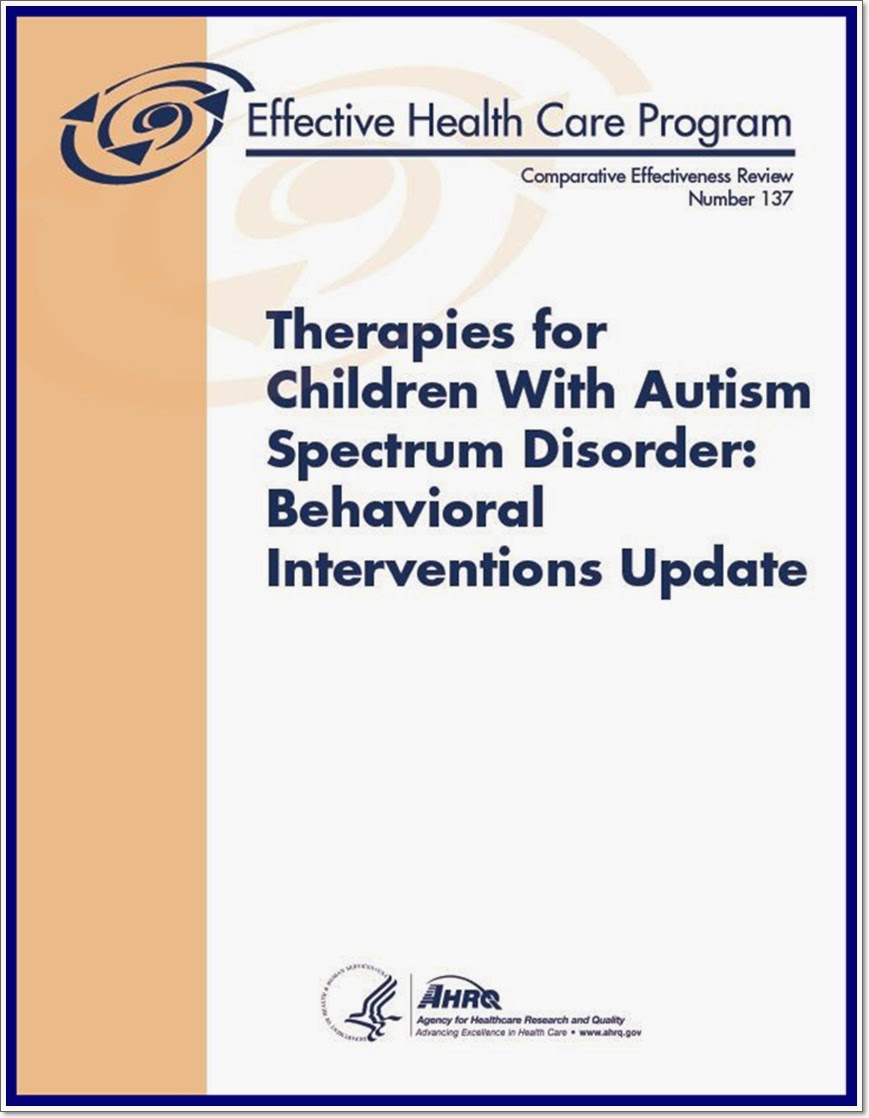 The US Agency for Healthcare Research & Quality Review Therapies for Children  With Autism Spectrum Disorder: Behavioral Interventions Update has found a dramatic increase  in the scientific evidence backing the effectiveness of intensive behavioral therapy for children affected by autism. The report some 519 pages in length has been reviewed on the Autism Speaks Science Digest site:

"We are finding more solid evidence, based on higher quality studies, that these early intensive behavioral interventions can be effective for young children on the autism spectrum, especially related to their cognitive and language skills,” says lead author Amy Weitlauf, a clinical psychologist with the Vanderbilt [University] Kennedy Center. (The Vanderbilt Kennedy Center is part of the Autism Speaks Autism Treatment Network.)

Dr. Weitlauf and her co-authors are members of the Vanderbilt Evidence-based Practice Center. It's one of twelve federally funded centers conducting scientific reviews to help patients, clinicians and policy makers make informed decisions about healthcare services.

Their review updates a 2011 report that noted gaps in the research needed to assure the effectiveness of often-costly autism therapy programs. In particular, they examine new scientific findings on the effectiveness of intensive early intervention therapies based on applied behavioral analysis (ABA). Their update includes 65 studies published since the 2011 report.

“This review speaks to the clear consensus on intensive early intervention,” comments developmental pediatrician Paul Wang, Autism Speaks senior vice president for medical research. “Kids with autism clearly benefit from these behavioral interventions, and we need to make sure that they’re provided.
“In the long run,” Dr. Wang adds, “intensive early intervention saves money by promoting greater independence later in life. Autism Speaks continues to sponsor research to show how we can further enhance intervention methods and their cost-benefits.”

Lorri Unumb, Autism Speaks vice president for state government affairs, notes the importance of the new report for advocacy efforts. “The new Vanderbilt study further reinforces the overwhelming record of evidence supporting the efficacy of Applied Behavior Analysis in treating children with autism,” she says. “In study after study, ABA continues to be confirmed as a beneficial intervention that can vastly improve the lives of kids with autism. And with each study, insurance industry claims that ABA is somehow ‘experimental’ become ever more untenable.”"

Here  in Canada parents have argued for more than 15 years for government provided ABA treatment for autism based on the studies reviewed at different points in time by the US Surgeon General, the MADSEC (Maine) Autism Task Force Report, and the American Academy of Pediatrics. Now recent studies published in the Canadian Medical Association Journal (January 2014) and this review by the US Agency for Healthcare Research & Quality Research further strengthen the evidence basis of ABA as an effective autism treatment.  None of this is likely to  matter to strident anti-ABA Advocates but for government service providers and parents of autistic children this further strengthening of the evidence basis in support of ABA for autistic children will provide yet more guidance in how to help autistic children.
Posted by Unknown at 1:46 pm

ABA is not only for young children but can benefit people at any age. With or without autism.