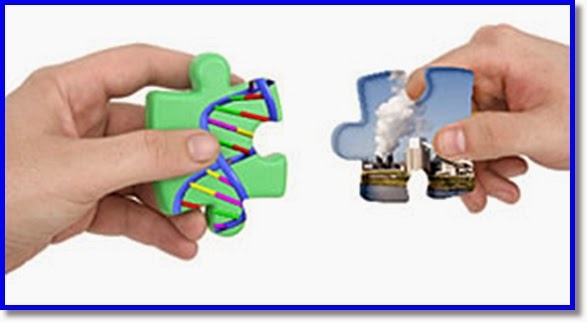 National Institute of Environmental Health Sciences:  Gene-Environment Interaction: Nearly all diseases result from a complex interaction between an individual’s genetic make-up and the environmental agents that he or she is exposed to.

Genetic research has maintained a near monopoly over autism causation research dollars for many years and with that financial monopoly the belief that autism disorders are necessarily genetically caused or triggered. If holes appear in existing gene theories of autism causation the autism research world regroups and sends up a new model.  As always with autism research "its gotta be genetic" - Teresa Binstock, 1999, IGNAZ SEMMELWEISS and AUTISM: when prevailing paradigms resist change. The CBC reports on the latest model arising from the large Swedish study in Autism linked primarily to common gene variants:

"The latest research suggests genetics are the single greatest factor in whether someone develops the condition, accounting for about half of the cause.

Crucially, though, according to the study from Swedish and American scientists, most of the genes underlying autism disorders aren't beset by rare mutations, but are common variants found in the general population.

"Although each exerts just a tiny effect individually, these common variations in the genetic code add up to substantial impact, taken together," study co-author Joseph Buxbaum, a professor of medicine at Mount Sinai medical school in New York City, said in a statement.

That represents a change in thinking from early genetic studies of the condition, which focused on rare glitches in the DNA of people with autism disorders."

To this humble autism dad  if the genes underlying autism disorders are common variants then it suggests that something else ... dare we say it ... environmental factors might be involved.  Maybe our wizards of autism research could start actually meaning it when they talk about gene environment interaction.  Maybe they could also stop arrogantly dismissing the work done by the few autism researchers who have focused on environmental factors that might contribute to autism disorders ... people like Irva Hertz-Picciotto Ph.D., UC Davis M.I.N.D. Institute Researcher, and Dr. Joachim Hallmayer associate professor of psychiatry at Stanford University in California. Maybe they could listent to the National Institute of Environmental Health Sciences and develop a research paradigm that reflects gene environment interaction.
Posted by Unknown at 5:46 pm

Let us also remember that some environmental toxins are mutagenics - so the heritability is both locational and woven into the genetic fabric. No hiding place...