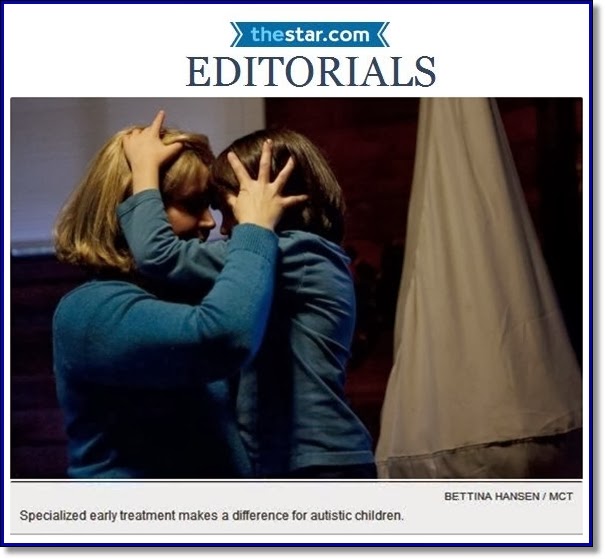 In Autistic Children Need Help, Not Delays The Toronto Star has spoken out clearly in support of children with autism disorders in Ontario. The Star's message applies in most jurisdictions across Canada.  While the Star focuses on Ontario the same logic applies across Canada. Canadians and some conscientious, concerned political leaders including the late Andy Scott from Fredericton, Shawn Murphy from PEI, Glenn Thibeault from Ontario, Peter Stoffer, Nova Scotia, the late Jack Layton and NB Senator Jim Munson spoke out in support of a strong Real National Autism Strategy which, if one had been adopted would have ensured better lives for many children with autism disorders.  The fact that these children are missing out rests squarely on the shoulders of Prime Minister Stephen Harper, his "autism dad" front man Mike Lake and their partners in the Bloc Quebecois who opposed meaningful national help for autistic children in Canada.


"Published on Sun Mar 09 2014
Now that Premier Kathleen Wynne is busy rebranding herself as the crusader for open government, it’s worth noting that accountability also extends to promises that remain unfulfilled.
One of the most heartbreaking issues facing many Ontario parents is the government’s failure to help children with autism, especially in the first few years of life when dramatic improvements are possible — with proper treatment. How sad that so much potential is lost, all because young children can’t get specialized therapy when the brain is malleable enough to change.
As the Star’s Andrea Gordon reports, four different committees and investigations into the fragmented, confusing and overburdened autism system continue to hear the same concerns, except now the problems are worsening.
In order to provide accountability to these families, Wynne must pay attention to their struggles and help parents, many of whom have reached the breaking point. One particularly egregious failing, as the government well knows, is the red tape that forces families to spend months on a waiting list to get a psychological assessment that will decide whether a child will spend years — on another waiting list — for therapy. It’s tragically ridiculous.
It can take some four years to get proper therapy, which leaves many parents so desperate they take on massive debts to pay for the only other option, expensive private treatment. Those who can’t raise the cash are left to accept whatever help their children are offered, which often arrives too late.
All of these problems were documented in a 2012 Star series on autism, which inspired a promise from the Liberal government for a blue-chip panel of experts to report on improvements to policies and services for people with autism. It was a significant step forward.
While the committee’s worthy work is ongoing, it has no control over government funding and since the government has yet to make any dramatic changes, the problems continue.
Wynne must find the money to get children off those waiting lists and into proper, long-term treatment. And that’s just the start. The patchwork system should be dismantled and recreated as a new, streamlined service that helps instead of hinders.
To be fair, some improvements have been made, such as increased supports for young people transitioning from high school to post-secondary studies. That’s certainly beneficial.
And there’s hope that a Queen’s Park all-party committee on development services will make good recommendations, which are expected in May. Its recent interim report poignantly noted the value of proper treatment, as told by the grandmother of two autistic boys: The first, she said, had to wait four years for therapy and by then he “regressed, his behaviours became ingrained and the window of opportunity was missed.” When the second boy was diagnosed, his family immediately sent him to private specialized therapy and he’s now a successful student in a regular school.
It’s about potential. Accountable governments should help children with autism achieve it."
Posted by Unknown at 6:09 pm

Many provinces require the child to be seen by a multiple disciplinary team. This can take a significant amount of time since each has their own waiting list.
To reduce the waiting time for therapy the government should allow for an observation and diagnosis to be done by a psychologist alone. The rest could wait or be seen as needed. A neurologist will not diagnose autism.

Unfortunately with our constitution the only way a "national strategy" works is direct funding to parents by the federal government bypassing the provinces. Otherwise there is no guarantee that provinces like Ontario will simply allocate federal money to existing programs. More federal dollars does not mean more service unless there is accountability and the provinces are happy to take money but loathe to be told how to spend it. If it were up to me, health coverage (what is covered and what is not) would be a federal responsibility; as it is, it sits on the backs of the provinces and in many cases early intervention is not handled by the health ministry.

In our case, we simply followed the services, and are now enjoying the same ones enjoyed by Mr. Lake. It's either direct funding to families (like the universal daycare benefit) or a constitutional change. The former is more likely but the provinces would flay any PM who tried. Maybe if Jim Munson took over a party?

In Ont a Dev Ped, child psych or psychologist can dx autism. Children in Ont never see a neurologist unless they have seizures.

The child years are manageable. The adult years in Ont are disgraceful. The Prov took over who gets what, a few years ago and truthfully, nobody, including the CL's really understand what the criteria is.

Just when you thought you knew the rules...

If a child has severe Autism. It does not take a team to diagnose. Eventually these time delays will lead to more and more parents who are emotionally and physically exhausted abandoning their kids at the feet of the institutions that seem hell bent on dragging their feet in the face of this ever growing and serious situation. As for me and my wife, it's getting harder and harder to stay silent and tow the line as it were. National strategy be damned Harold. We need local change and we need to start now!! Let's get loud again. Cam. (Monday morning rant done)

What is appropriate therapy for someone who has severe autism like Conor in terms of early intervention?
As you have said in many posts.
Research is always done on those with high functionning autism.
How do you know that ABA therapy is the best solution for those that get tested early that have severe autism?