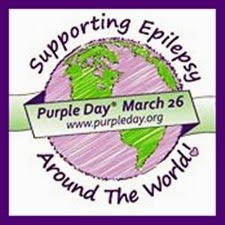 Today is officially Purple Day in Canada. Founded by Cassidy Megan of Nova Scotia, it is a day to wear purple to increase epilepsy awareness in Canada, around the world, and in homes like ours where our son Conor, like many with autism disorder and intellectual disability, also suffers from epileptic seizures.  Given the substantially greater numbers of persons with autism, particularly when they also suffer from intellectual disability, awareness should also make that increased prevalence known in the autism community.

Conor had suffered from absence seizures that we were aware of for several years.  In 2013-2014 he suffered 2 tonic-clonic seizures, formerly known as grand mal seizures which scared the heck out of me; alone at home with him at the time.  He also suffered a major adverse reaction (hospitalized for 2 weeks, including 6 days in the Intensive Care Unit) to his seizure medication at that time,  (Lamotrogine), which is reported to be highly effective for most who take it to control and prevent seizures.  As has been reported by SFARI (Simon's Foundation Autism Research Initiative) teens like Conor,  with autism and intellectual disability, are at increased risk of epileptic seizure:

"Children with autism who are older than 13 years and have low intelligence are at the greatest risk of having epilepsy, says one of the largest epidemiological studies on the issue to date1. Children are typically diagnosed with epilepsy after having at least two seizures — uncontrolled surges of electrical activity in the brain. About 2 percent of the general population has epilepsy2. Most studies peg its prevalence among people with autism at 30 percent.
The new study, published 4 July in PLoS One, breaks down this prevalence by age. It finds that among children with autism, up to 12.5 percent of children aged 2 to 17 have epilepsy. The rate is largely driven by epilepsy in children aged 13 to 17, who have more than double that prevalence. The study also found that low intelligence — defined as having an intelligence quotient (IQ) below 70 — is associated with a cluster of symptoms seen in people who have both epilepsy and autism. The symptoms include difficulty with daily living, poor motor skills and language ability, regression and social impairment."
SFARI (Simons Foundation Autism Research Initiative), Risk of epilepsy in autism tied to age, intelligence, Laura Geggel, August 19, 2013
NOTE: Epilepsy Canada's web site has important facts and information about epilepsy including types of seizures, diagnosis and treatment, and generally how to cope with seizures.

March 26 is officially recognized across Canada as Purple Day thanks to the 2012 Purple Day Act:

This enactment designates the 26th day of March in each and every year as “Purple Day”.

Whereas the Parliament of Canada wishes to assist in efforts to educate and increase awareness, among members of the public, about people living with epilepsy;
Now, therefore, Her Majesty, by and with the advice and consent of the Senate and House of Commons of Canada, enacts as follows:

1. This Act may be cited as the Purple Day Act.

2. Throughout Canada, in each and every year, the 26th day of March is to be known as “Purple Day”.

3. On the 26th day of March, people are encouraged to wear the colour purple to indicate their support for people with epilepsy and to increase public awareness of this disorder.

4. For greater certainty, Purple Day is not a legal holiday or a non-juridical day.