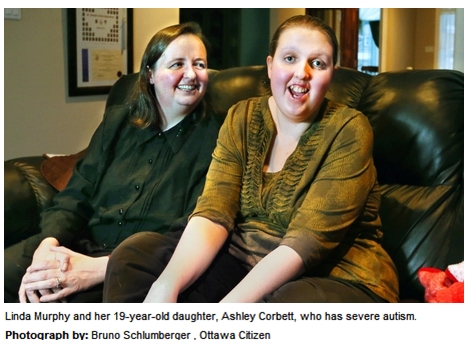 Long time members of the Autism Society New Brunswick, particularly those from the Fredericton area, will recognize in the picture above former NB'er Linda Murphy and her daughter Ashley who has severe autism and is now 19. They are featured in Autism's New Frontiers PART 2: ‘The bridge to nowhere'. A few years ago Linda and Ashley moved from New Brunswick to Ontario. The excellent Ottawa Citizen article looks at the "fractured" adult autism care system in Canada, although personally I think it might be a bit of a stretch to call it a system at all whether looked at nationally or provincially in Ontario (or New Brunswick). The harsh reality to date is that Canadians and our political leaders have shown little interest in providing a serious, modernized adult autism care system.

The harsh reality of Ontario's abysmal adult autism care system is as bad as it would have been had Linda and Ashley stayed here in New Brunswick. Linda has decided to keep Ashley in school until she "ages out" at 21 after which time there is little assistance available:

"Some families have complained that their loved ones are at risk of ending up in a homeless shelter or jail because there is nowhere for them to go, especially when they get aggressive or violent, says Ontario’s Ombudsman André Marin. His office, which has received a growing number of complaints in recent years, has launched a probe into why so many adults with developmental disabilities fail to get the services they need from the government. “We have heard heart-wrenching stories from aging or ill parents whose adult sons and daughters are a danger to themselves and others and need constant care that can’t be provided at home — but they have nowhere to turn,” Marin said last November in launching his investigation. “Some of these caregivers are on the brink of emotional and physical breakdown. We have investigated past cases where people with these severe disabilities have been sent to shelters and even jail.”

The gaps in service, which exist to varying degrees across the country, raise profound questions about what level of care and support Canadians are willing to give adults on the spectrum, whose abilities and needs are wide-ranging. “Right now, this logic that it will fall on the families first and we’ll pick up the disaster later is causing all kinds of suffering that’s unnecessary,” says Herb Emery, a health economist at the University of Calgary who’s studying the issue. "

The gaps in service are very evident here in New Brunswick.  A group home system with staff lacking autism training is supplemented only by permanent transfer to psychiatric institutions in Campbellton and Saint John.  Neither the New Brunswick government nor its non elected partner the New Brunswick Community Living Association, which determines many of the NB government's social policies, want to establish an enhanced adult autism care network as proposed by NB autism expert Paul McDonnell.

The McDonnell proposal would see a facility in Fredericton near the autism expertise of UNB, UNB-CEL and the Stan Cassidy center which could provide permanent long term care for those with severe autism needs and could also provide expert assistance to the community based group homes.  Money is only part of the problem.  NBACL and the NB Government prefer to simply ignore the real life suffering of those with severe autism who do not fit into their rigid  adherence to failed, non evidence based, community inclusion models. Rather then construct an actual place for severely autistic adults to live under expert care they prefer to abandon them to general hospitals, psychiatric hospitals and foreign facilities most notably the Spurwink facility in Maine.

Linda Murphy was among the parents who fought for early autism intervention and autism trained aides and teachers in New Brunswick schools while in New Brunswick.  Hopefully her advocacy for adult autism care in Ontario will help improve the lives of autistic adults like Ashley.  Meanwhile, here in New Brunswick we too will continue the fight.  Not because we want to but because we have no other choice.

Good luck and best wishes to Linda and Ashley.
Posted by Unknown at 5:14 am

While it is a pretty good article,I think they could have also said more about autistics who are even older,and have lived with parents their whole lives.The parents then die,or go into a nursing home themselves.In my ARI group,we recently heard from a woman with a severely autistic,nonverbal 48 year old daughter,who had been in group homes and residential treatment centers since she was eight years old.The daughter has both severe GI disease,and other complex medical issues that have not been fully looked into.She had some kind of acute medical crisis,brought on by severe malnutrition,and was near death,when the mother smuggled her out of the home.

The sad part is,that the people who run these homes and centers are so used to seeing those with severe autism in horrible states of health,that they see it as the norm.None of the inmates,what they really are,at these places can ever dream of seeing the type of treatment,I or so many children,have.

If I had a child with severe autism,this is the last place I would want them to be.I wish there were better solutions.