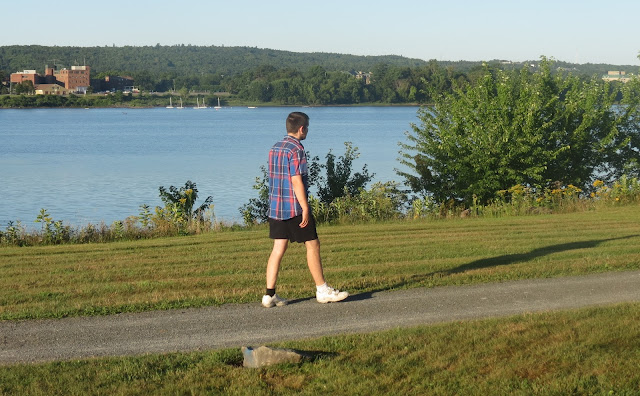 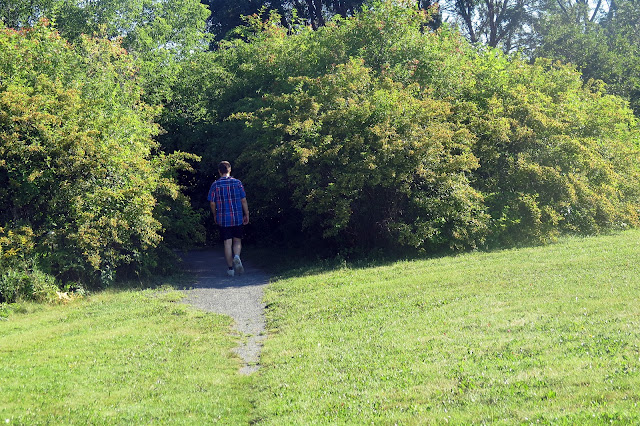 Conor walking with Dad this morning. I often let him walk a
distance ahead of me so he can make decisions and demonstrate his
knowledge of routes and how to get home on his own if necessary.

Today an old fear returned and grabbed me firmly.  It was the greatest fear I have known in my life.  And it came back with full force.

I have written a couple of times on this site about the time several years ago, when Conor was much younger, and he left the house unnoticed while he was in my sole  care.  When I realized he was missing I ran around the house, down to the Saint John River which was close to our home, across a nearby busy parking lot and then back home before calling 911. The 911 operator told me he had been taken into a nearby convenience store by a good Frederictonian who had stopped his vehicle to remove Conor from traffic to safety.  The man left as soon as I arrived and identified myself and he new Conor was safe. He left without waiting to be thanked.

Today, years later, I was again the adult in charge and I was again distracted by a business call.  When the call was ended and I looked for Conor I realized he had again left unnoticed.  I ran outdoors around our house calling his name without spotting him,  then ran back upstairs to speak with his brother who had been busy in his room and hadn't heard him go out. When I ran down the stairs Conor stepped into the house and I was again relieved.  I believe he had just been in the back yard starting to leave via a shortcut to one or our regular walking paths and heard me calling for him.

Conor is no longer a small child physically but he has serious cognitive challenges and severe autism disorder. When we go on our almost daily walks I will often let him walk ahead of me, within eyesight, to let him make the decisions about the direction to go to find our way home.  I have done so in the hope that if he does leave unnoticed he will know his way back which I believe he does. For that reason I  was not as fearful, or not quite as fearful, when  I couldn't find him quickly today.  I admit it though.  I was scared again.  And thankful when Conor returned to the house. Very thankful.

Makes me like winter and rainstorms. He won't go out in either as easily.

Mine has gone back to wandering out doors and it's frustrating. Today, I was getting my stuff and he's gone and of course he didn't go to the van like he was suppose to. I yelled for him and he came around the house. I send him out for his bathing suit and he's half way to his Aunts. Not bolting, not lost... just wants to be allowed to go.

Last week he was nearly to my BIL's across the hay field before we found him. BIL had seen him as well and called. I had gone upstairs to put the laundry away and he was playing here on the computer...... I heard the door and came flying down the stairs. There's a reason I wouldn't let my Father oil the hinges when they were small.

Thing is... he knows these 350acres as well as I do and he's getting pissy about the lack of freedom to go where he wishes like his older bro.

So..... how do we stretch the cord without actually cutting it???

dead bolt locks that can only be opened with a key are great for peace of mind. We hide keys. Have some decoy keys around too to slow her down. The odds of her leaving are very low especially if there is a computer or iPad around, but I do sleep better knowing that she cannot get out of the house. Have lost her a couple of times IN THE HOUSE (once down air return vent) and at least I know she is still inside.