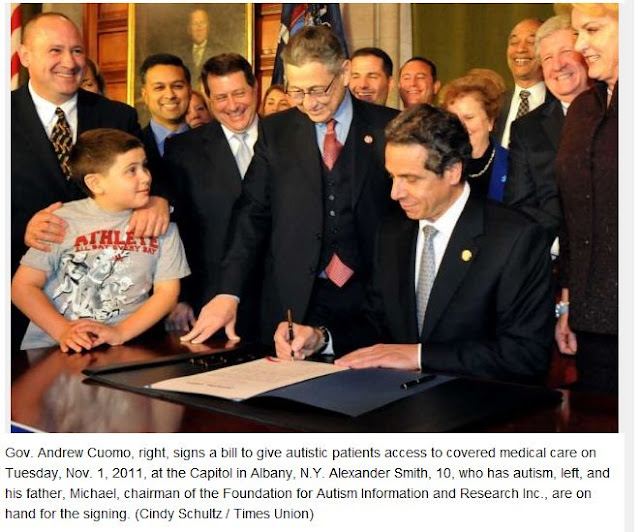 While this Canadian autism father is annoyed by media attention given to Canadian researcher  Laurent Mottron's perpetual crusade to recreate autism disorders in the image of his mentor Michelle Dawson, and trivialize the plight of the 70% of persons with Autistic Disorder and intellectual disabilities, there is good news south of the border to brighten the day.  In New York state BuffaloNews.com reports that our sensible American neighbors have passed legislation requiring insurers in that state to cover treatment for autism disorders:
A measure requiring health insurers to cover autism disorders was signed into law Tuesday, making New York the 29th state to enact such coverage mandates for the complex neurobiological disorder ... The legislation, signed into law by Gov. Andrew M. Cuomo, was approved unanimously by both legislative houses in June.


Dr. Mottron must surely be disappointed that US states are moving to provide insurance coverage for autism treatments that he and his mentor Michelle Dawson opposed at the Supreme Court of Canada in the Auton case where she intervened as an "autistic" in an effort to prevent the British Columbia government from being required to fund ABA treatment for autistic children.  (Dawson's request for intervenor status was backed by Dr. Motton's affidavit in support).


The American Academy of Pediatrics and experts are referenced in the BuffaloNews article supporting early treatment for autism:


"The American Academy of Pediatrics says that there is no cure for autism-related disorders but that children, with treatment, can progress and learn new skills. Experts say early diagnosis is key to helping improve conditions for children afflicted with autism. "

The AAP has previously given clear guidance on effective treatments for autism:


The effectiveness of ABA-based intervention in ASDs has been well documented through 5 decades of research by using single-subject methodology21,25,27,28 and in controlled studies of comprehensive early intensive behavioral intervention programs in university and community settings.29–40 Children who receive early intensive behavioral treatment have been shown to make substantial, sustained gains in IQ, language, academic performance, and adaptive behavior as well as some measures of social behavior, and their outcomes have been significantly better than those of children in control groups.31–4
American Academy of Pediatrics,Management of Children with Autism Spectrum Disorders

The AAP 2007 report  Management of Children with Autism Spectrum Disorders was reaffirmed  by the AAP in September 2010:

AAP Publications Retired and Reafﬁrmed
REAFFIRMED
Clinical Report: Dealing With the Parent Whose Judgment Is Impaired by
Alcohol or Drugs: Legal and Ethical Considerations. Pediatrics. 2004;
114(3):869 – 873. Reafﬁrmed September 2010
Clinical Report: Identiﬁcation and Evaluation of Children With Autism
Spectrum Disorders. Pediatrics. 2007;120(5):1183–1215. Reafﬁrmed
September 2010
Clinical Report: Management of Children With Autism Spectrum Disorders. Pediatrics. 2007:120(5):1162–1182. Reafﬁrmed September 2010
Unfortunately in Canada the views of Dr. Laurent Mottron and his mentor Michelle Dawson concerning ABA treatment of autism disorders hold great sway with the government of Prime Minister Harper which invited them to the national autism symposiums from which Canadian ABA advocates were banned despite having fought for a national autism strategy which led to the symposiums.
In Canada the fight for ABA coverage for autism disorders continues though and determined parents and professionals will not give up. Although the mainstream media loves the feel good picture of autism created by Neurodiversity ideologues like Mottron and Dawson a history of the struggle for treatment for our autistic children can be found online at Medicare's Orphans.
Posted by Unknown at 8:22 am