The Mottron Mantra: Autism Is An Advantage Not A Disorder 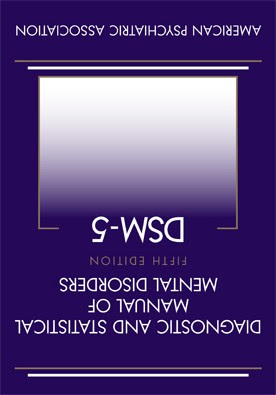 The DLM5:   Dr. Laurent Mottron's Diagnostic
and Statistical Manual of Mental Advantages
If you authored or coauthored several journal articles a year over many years, involving high functioning, highly intelligent persons with autism and surrounded yourself with very intelligent, high functioning autistic researchers would they influence your perception of autism? In the case of psychiatrist, and anti-autism cure, anti-ABA activist, Dr. Laurent Mottron, who has published many journal articles involving high functioning autism participants, the answer is yes.
Dr. Motton has acknowledged repeatedly that his perception of autism has been influenced by his professional relationship with the very intelligent, high functioning autistic Michelle Dawson. In his latest comment in the journal Nature Dr. Mottron states that the half dozen autistic persons who form part of his research team are "typical autistics".
As the father of a son who is not one of Mottron's "typical autistics", who is in fact one of the approximately 70% of persons with Autistic Disorder (not autism generally) who also have intellectual disabilities and is severely affected in his understanding of the world and his daily functioning skills I am left shaking my head once again at Dr. Mottron's characterizations of autism. Once again, prominent media headlines around the world are screaming the Mottron mantra that autism is an "advantage".
Dr. Mottron acknowledges that many with autism are considered intellectually disabled although he expresses his doubts about the figures, saying he doesn't believe them. His vague caveats about the serious challenges faced by so many with autism are buried in the article and do not form part of the autism is an advantage headlines.
Maybe Dr. Mottron should start hiring some of the many persons with Autistic Disorder and intellectual disabilities, including some of the adults living in institutions including psychiatric hospitals. Maybe he should get out of his lab and join one of the search and rescue teams that are regularly called out to find autistic children who wander away from home and school.  Perhaps he could join the tertiary care team at the Stan Cassidy Center here in Fredericton and help the autistic children and youth with severe behaviour challenges that they treat.  The caseload the Stan Cassidy handles is so overwhelming that the administration had planned  a few years ago to disband the autism team because the workload was so great it was threatening its ability to provide other services offered by the center to persons with neurological injuries.  The autism team was continued after public opposition led by parents of children with autism, parents who have to deal 24/7 with the daily realities of their children's autism disorders.
I am surprised Dr. Mottron is not fighting the American Psychiatric Association's proposal to combine the various autism disorders into one new Autism Spectrum Disorder in the DSM5, the proposed new version of the APA's Diagnostic and Statistical Manual of Mental Disorders.  After all "typical" autism for Dr. Mottron is not a disorder, it is an advantage.
Posted by Unknown at 5:40 am

As a parent of a child who can't speak and is in nappies, I already feel forgotten and overburdened; more so when I read stories slanted to show the 'good' aspects of the condition. Given that those dealing with the most severely affected children have the least time to write and speak out, or engage politically, these stories tend to take over and we're left with an unconvincing theory (adopted as widespread truth) that autism has always been among us. I come from a large neurotypical family, and have a daughter who can't speak and is in nappies at age 8, so this theory doesn't do much for me. My girl is as much the face of autism as someone who can write symphonies or design abattoir chutes; yet Temple Grandin, one of autism's high functioning success stories, seems to form the basis for an entire intervention approach here in Australia. I'm so glad for this blog and hope it continues to shine a light on the massive tragedy that is autism (and our various governments' choice to overlook reality in favour of corporate-scripted fairy stories).

Kim and Erica, I thank you both for your kind words.

as a high-functioning adult raising a high-functioning child, I think you all are too quick to dismiss this new way of looking at autism as an attempt to marginalize you. I haven't met anyone on the spectrum who doesn't feel marginalized, and the assumption that "high-functioning" really means we function well is really misleading. the fact that my son is verbal only meant that we got many misdiagnoses and misdirected from therapies that would have helped. he's verbal, but cannot function socially and is in constant pain from sensory issues that prevent him from attending school... and I can barely function in public, although my IQ is higher than 98% of the NTs I have to deal with. I feel barely tolerated, and therapies for people with autism seem to be geared toward making us less offensive to NTs, not toward making us happier humans... but I digress. I was more than a little offended by the tone of this article, because people are too quick to write non-verbal people off as unintelligent. I think a few researchers are finally starting to see that there's more to autism than they thought, with issues on several continuums: sensory, verbal, social, and data processing. just because someone cannot speak and suffers from data processing and sensory issues so severe that they're impeded from communication, doesn't mean they wouldn't like to, very much. I wouldn't be too quick to lump the "low-functioning" into a category of utter hopelessness. I think it's counter-productive. I'm hoping that the work currently being done will steer us toward developing therapies for the terrible sensory issues that make life so difficult for us. if I could have that, there's no way I'd give up being autistic for being NT. it's really only the constant pain that I dislike. I hated knowing I was different when I was a kid and not being able to figure out why, especially since I never got one bit of acceptance or empathy from 95% of the NTs I've had to deal with throughout my life. I'm happy to say I'm done with feeling bad for being on the spectrum... in fact, I like the way my mind works. and no matter what my son puts me through, I will not make him feel bad for being autistic. we were lucky to find his talent and use it to help him deal with the hard parts of being on the spectrum. he has a battle ahead of him because NTs are so uncomfortable around people on the spectrum, and so unwilling to accommodate, that I'm afraid his life will be as disappointing as mine has been. I hope not, though. there's a lot of work to be done, and personally I find Mottron's writing shines a light into an otherwise bleak abyss.

psychomia you make no mention of the challenges faced by those, like my son, with severe autistic disorders who do not have your high IQ, or your ability to understand and function in the real world.

Are you disappointed that Dr. Mottron ignores low functioning, severely autistic persons and has done so throughout his career?

Are you disappointed that he criticizes ABA the only evidence based treatment shown to help autistic children?

While you can function well enough to raise a family and post comments on the internet, and have a high IQ, do you ever acknowledge in the proper "tone" the existence of severely autistic children and adults or attempt to understand their challenges?

I thought your blog was very interesting, as an individual with autism and as a researcher. I like how you place an emphasis on looking at your son's advantages and needs in an individual way.

I have posted a blog explaining my views on Mottron's article (link below), and he has replied in turn. I would be interested to hear your views on my blog and the ensuing discussion.

Thanks again for the blog, such a valuable insight and contribution.