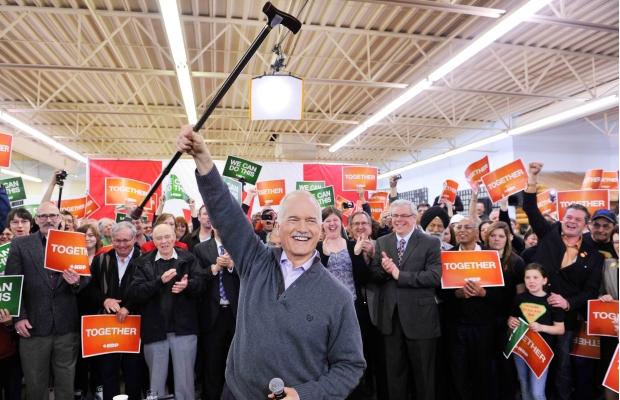 There will be many words spoken to express the great loss that Canadians feel on hearing of the passing of Jack Layton.  His positive, feisty, spirit won the hearts of many Canadians in the last election but he has long been a champion of great causes from the homeless to the environment.

Jack Layton was also aware of the challenges facing Canadians with autism and the need for the federal government to address those challenges. The Medicare for Autism Now! organization had obtained the following statement from Jack Layton as leader of the NDP which I had posted on September 17, 2008:

"Jack's Response on Autism
First, both NDP MP Peter Stoffer and myself have challenged the federal government for not providing funding in its last budget to help families with autistic children. I fully recognize that families with autistic children are in crying need of support and they are very disappointed that the Conservative government has ignored their needs in their budget spending.
On the matter of voting, in the April 3, 2006 to September 14 ,2007 session of parliament MP Shawn Murphy introduced his private members legislation Bill C-304, An Act to provide for the development of a national strategy for the treatment of autism and to amend the Canada Health Act. C-304 received first reading on May 17, 2006 but unfortunately it did not make it to third reading or a final vote because it died when the Harper government chose to prorogue that Parliament. I am also aware that on March 29, 2007, the Standing Senate Committee on Social Affairs issued a report on the Funding of Treatment for Autism titled:" Pay Now or Pay Later: Autism Families in Crisis" in which they recommended that the federal government demonstrate some leadership in the autism file by collaborating with the provinces to create a National Autism Strategy and address the funding of treatment. However, this report was not put before parliament for a vote.


New Democrats recognize that providing support for families with Autistic children has to be a bigger priority for the federal government than another corporate tax cut. That is why Peter Stoffer has introduced Private Members' Bills, C-211, An Act to amend the Canada Health Act (Autism Spectrum Disorder) to "ensure that the cost of Applied Behavioural Analysis ( ABA) and Intensive Behavioural Intervention (IBI) for autistic persons is covered by the health care Insurance plan of every province" and C -212, An Act respecting a Canadian Autism Day. ' The federal NDP is proud of Mr Stoffer's efforts to help put the needs of Autistic children on the political map."
Goodbye Jack.

Yes, he died to soon. Yes, he should have enjoyed being leader of the opposition, he worked hard enough to get there.

But a hero of autistic children... give me a break. Let's ram down an unproven therapy - keep waiting for your to post on your blog those peer reviewed articles - that many, many people don't want. Choice, choice, choice... something socialists don't want b/c as you and I know... we can't think for ourselves and doing so would make us conservatives or libertarians and that's just wrong.

FW2 thank you for your usual anti-ABA tirade.

You talk about choice but you seem to think that your choice of opposing ABA should overrule the opinions of experts from the US Office of the Surgeon General, to the American Academy of Pediatrics, to several state agencies including California, New York and Maine.

You ignore the experts who actually work helping autistic children like those in Dr Granpeesheh's CARD and those associatedwith the Association for Science in Autism Treatment.

You offer no evidence based alternative to ABA for autism and you expect public policy to be based on your own personal experience?

Jack Layton and other NDP MP's including Peter Stoffer and Glenn Thibeault have advocated for coverage for evidence based effective treatment for autistic children. For that I thank Mr Stoffer and Mr. Thibeault and appreciate the contribution made by Jack Layton in his time.

Just curious FW2. What's wrong with ABA? And what other government sanctioned help would "you" recommend? God? A miracle? Luck? Blind chance? People need help. What should it be? Tell us please.