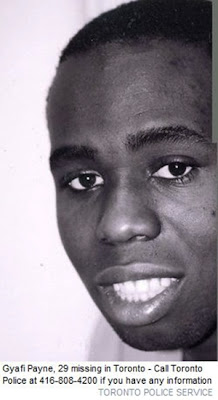 A  29 year old Toronto man with Autism has been found safe and sound. 680 Toronto News All News Radio reports that Gyafi Payne is described as having the "mental capacity of a five year old". He had gone missing around 7:30 pm Saturday.  Apparently he followed a local river to a golf course where he spent the night and was found the next day after a citizen at the golf course spotted him and called police. He was taken to hospital to be checked out and is reported to be in good shape.
Autism reality for the approximately 80% of persons with DSM-IV Autistic Disorder and intellectual disability is not necessarily a  joy for those persons and their families.  Stories of missing autistic persons do not always have a happy ending. As the father of a 15 year old severely autistic boy who went missing several years ago  (and was found safe and sound thanks to a helpful citizen and local police)  I am always happy, very happy, to read stories that end with a missing autistic person being found safe and sound.
Posted by Unknown at 3:46 am

So glad to hear about a happy ending. Wish there were more! Thanks for posting! All the best! :) Heather