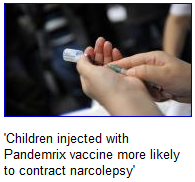 (AFP Photo and Caption)
As the parent of a soon to be 15 year old boy with severe Autistic Disorder I have never attributed his autism disorder to vaccines. I have always accepted the view of public health authorities that there is little or no evidence linking autism to vaccines. With that mindset I never endorsed Jenny McCarthy's views of autism and vaccines although I admired her courage in fighting for her son.

At the other end of the vaccine autism battlefield I support vaccine programs generally as vitally important public health tools but I have become increasingly concerned by the campaign to discredit those who question vaccine safety and the certainty with which Vaccine Generals like Dr. Paul Offit and Dr. David H. Gorski aka Orac have declared that all vaccines and vaccine ingredients can never cause any autism disorder in any child.  Given the lack of certainty about what autism is biologically, given the shifting autism definitions used to attack what appears to be an obvious and astounding increase in autism disorders,  I don't see how the epidemiological studies can be that definitive. A particular question for me is whether the studies have actually ruled out the possibility that vaccines given to pregnant women might cause or trigger autism in the children they are carrying. Another major question arises from the failure to conduct studies comparing autism rates in existing vaccinated and unvaccinated populations.
Dr. Offit is the gentle, sweater wearing uncle type who poses for an adoring media and declares parents to be timid fearful sorts who can not understand science and the big picture.  Dr. David H. Gorski, aka Orac, is the snarling pitbull who delivers incessant attacks on vaccine questioners AND actual anti-vaxxers with scientific terminology like WOO, QUACK, IDIOT  and so on.  Both may soon be called on to lead their minions into battle again with news of a study out of Finland, as reported by AFP, which found that children injected with the Pandemrix swine flu vaccine were nine times more likely to contract narcolepsy than those who were not vaccinated  :
"Children injected with the Pandemrix swine flu vaccine were nine times more likely to contract narcolepsy than those who were not vaccinated, a preliminary study by Finland's National Institute for Health and Welfare, THL, showed Tuesday.
"Currently, the most likely explanation is that the increase in narcolepsy is by joint effect of the vaccine and some other factor(s)," THL said.
The institute stressed in its preliminary study that more investigation was needed, but said young people aged four to 19 had a "manifold increased risk of falling ill with narcolepsy" if they had been inoculated against swine flu with Pandemrix."
....
Narcolepsy is a sleep disorder which causes extreme fatigue and often results in the patient falling soundly asleep without warning, even in the middle of an activity.
Doctors in Finland reported a more than trippling of narcolepsy cases during the swine flue pandemic, and THL said "the risk of falling ill with narcolepsy among those vaccinated in the 4-19 years age group was nine-fold in comparison to those unvaccinated in the same age group."
...
"The observed association (with the vaccine) is so evident that it is unlikely that other so-called confounding factors could fully explain the phenomenon," THL said, adding its next step was to evaluate if other factors had created "joint effects" with Pandemrix.


It is interesting that a direct comparison of narcolepsy rates was made between those who were vaccinated with the H1N1 vaccine and those who were not. On the autism front former CDC directors Dr. Bernadine Healy and Dr. Julie Gerberding have both been reported in the past as stating that a comparison of autism rates amongst existing vaccinated and unvaccinated populations could and should be done. Their advice has been actively resisted by public health spokespersons. Dr. Offit and Dr. Gorski, each in their own way, will now undoubtedly be called upon to quell any concerns about vaccines and narcolepsy.


Meanwhile the comparative study of autism rates in existing vaccinated and unvaccinated populations will not be done. Unfortunately.
Posted by Unknown at 6:53 am

It has been explained to me that the comparision between vax and unvax'd populations is unethical because it would deny potentially life saving vaccines from a group of children. That makes sense from a general standpoint. I'm not sure how that argument works, though, if the population of children used were already not being vaccinated by parental choice...Christian Scientists, homeschoolers, the philosophically or otherwise religiously exempt. In that case the study's designers aren't withholding any treatment from anyone.

That is my understanding also AMR.

Pick an age group... say 10yr old kids in 2011... every child has to have school vax records. Get them, compare number with dx's one end of the country to the other.

Narcolepsy is an autoimmune disorder.

It seems possible that the formulation for H1N1 was sufficiently similar to the targets of homolog 2 that a similar situation has arisen.

Narcolepsy is a neurological disorder caused possibly by:

•Deficiency of hypocretin or orexin in the brain. This is an important deficit of a chemical that regulates appetite as well as sleep-wake cycles, over and above performing many other critical functions. Why this deficiency occurs, no one is absolutely sure but some possible causes are brain injury or trauma, strokes or tumors.
•Genetic reasons – 10% of all narcoleptic patients have at least one close relations suffering from a neurological disorder.

Thanks a lot for this informative post. keep working and posting this kind of articles.

Hi, i got this vaccine while i was pregnant with my son, he is 5 now, and got autism