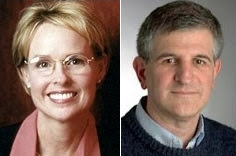 The Offit Offensive has been underway for a couple of years with heavy mainstream media, eg. the New York Times,  coverage of his books and with opportunities galore for interviews and serious discussion of vaccine issues eg. the Colbert Report. The icon of the "do not ask questions about vaccine safety " army which currently prevents media coverage of autism issues UNLESS they relate to vaccines was exposed in an AOL interview  (Geri Dawson of Autism Speaks was also interviewed) as someone with relatively  limited knowledge of autism who was prepared to grasp at anything that exonerated vaccines as a potential cause of some cases of autism.  To that end Dr. Offit warmly embraced the Neurodiversity ideology |(which does not view autism as a disorder,) sympathizes with very high functioning autism advocates and shows no awareness of the effects on everyday functioning of those with severe Autistic Disorder.
Some examples of Dr. Offit's autism awareness from the AOL interview Autism Experts on Causes, Cures and Controversies:

"AOL Health: Reports say that one in 110 American children is affected and that we are in the midst of an autism epidemic. Is this really an epidemic? Why now?


Offit: It's not an actual epidemic. In the mid-1990s, the definition of autism was broadened to what is now called autism spectrum disorder. Much milder parts of the spectrum -- problems with speech, social interaction -- were brought into the spectrum. We also have more awareness, so we see it more often. And there is a financial impetus to include children in the wider definition so that their treatment will be covered by insurance. People say if you took the current criteria and went back 50 years, you'd see about as many children with autism then.


Dawson: We know that the broadening of the diagnosis, as well as more awareness and access to services, accounts for some of this increase, but these variables don't account for all of the increase. Over the last two decades, the prevalence of autism has increased by over 600 percent. Between 2004 and 2006 we saw a 57 percent increase. A large percentage is unexplained, and that's why there is a focus on identifying environmental factors.

Alleged Autism Expert Offit relies on unidentified  people who say there were about as many children with autism 50 years ago?  Apparently autism expert Dr. Offit doesn't read information by people at the CDC and IACC who say based on research that approximately 50% of the increase in autism diagnoses is unexplained by diagnostic definition change, increased awareness or access to autism services.

From the CDC web site which states that autism is actually increasing:


"Does thimerosal cause autism?

Research does not show any link between thimerosal in vaccines and autism, a neurodevelopmental disorder. Although thimerosal was taken out of childhood vaccines in 2001, autism rates have gone up, which is the opposite of what would be expected if thimerosal caused autism."

Obviously the CDC would not have cited increased autism rates as support for the view that thimerosal does not cause autism if the increase were not real. AOL asked about causes of autism:

Dawson: Genetics play a significant role. If we compare identical twins who have all the same genes versus fraternal twins who only share half their genes, the concordance rate is about 90 percent in identical twins and only 5 percent in the fraternal twins. But there's evidence that suggests that environmental factors can also play a role. Most likely individuals with autism have a genetic susceptibility that interacts with environmental factors. Research is focused on factors such as the prenatal environment, prematurity and exposure to toxins such as pesticides

Alleged autism expert Dr. Paul Offit makes no mention of possible environmental causes or triggers of autism disorders preferring to mention only genetic bases for autism.  Dr. Geri Dawson's reference to evidence of environmental factor involvement in causing autism is in fact consistent with modern scientific consensus as expressed by the the Interagency Autism Coordinating Committee:

"As with many complex disorders, [autism] causation is generally thought to involve some forms of genetic risk interacting with some forms of non-genetic environmental exposure. ... In addition, a number of other environmental factors are being explored through research because they are known or suspected to influence early development of the brain and nervous system. Recent studies suggest factors such as parental age, exposure to infections, toxins, and other biological agents may confer environmental risk. ... Progress in identifying environmental factors which increase autism risk has been made recently (Eskenazi et al., 2007; Palmer et al., 2006; Palmer, Blanchard,; Wood, 2009; Rauh et al., 2006; Roberts et al., 2007; Windham et al., 2006), although this area of research has received less scientific attention and far fewer research dollars than genetic risk factors"[Underlining added - HLD]      - United States IACC (Interagency Autism Coordinating Committee)
Autism expert Offit may also want to consult the CDC web site on causes of Autism Spectrum Disorders:

We do not know all of the causes of ASDs.  However, we have learned that there are likely many causes for multiple types of ASDs.  There may be many different factors that make a child more likely to have an ASD, including environmental, biologic and genetic factors."
Once again, alleged autism expert Offit seems to be out of touch with mainstream scientific consensus on the role of non genetic factors in causing or triggering autism disorders.  Of course the use of the term disorder may be touchy for autism expert Offit who accepts the Neurodiversity views that autism is not a medical disorder and that autistic children will, if left without treatment, will improve over time:
"AOL Health: Do you believe that there is a cure for autism?

Offit: No. Children who show signs of autism sometimes can get better between 2 and 5, but it probably has nothing to do with the biomedical treatments -- they simply improve with time."


NOTE: Alleged autism expert Offit focuses on attacking biomedical treatments but makes no mention of behavioral intervention as possible explanation for autistic children's improvement.  Instead he embraces the Neurodiversity ideology which says let them be, just let them be ... there will be an answer ... they will get better on their own, let them be, let them be.

"AOL Health: What do you think of the theory promoted by many autistic rights organizations run by individuals with autism that society needs to accept neurodiversity and treat autistic individuals as people who think and understand the world differently?

Offit: It makes abundant sense. They are arguing that it's a way of being. It's a variance of normal. It should be looked at as such, not stigmatized. I've spoken to many of them, and they don't want to be seen as damaged.

Dawson: One of the things that is so challenging about autism is the fact that there's so much variation in the way autism is expressed in people. Some individuals can have a productive and creative life, and they aren't looking for a cure. They're interested in being accepted and getting access to services to help them adapt to the world with their special skills. At the other end, there are children severely affected who have significant medical conditions, such as seizures, and have never spoken. For those individuals, the prospect of a cure for autism is really important. That results in a lot of different perspectives of where our priorities should be."
Alleged Autism expert Offit makes no mention of the children severely affected by autism disorder for whom the prospect of a cure is really important as noted by Dr. Dawson.  Of course Dr. Offit would not actually be able to speak to many of those who are non verbal with intellectual disabilities.  And he would not actually talk to their parents either since he would be too busy talking down to them about how vaccines have never caused or triggered the autism disorders about which he knows ... so much.

"I'm never going to be an autism expert. The first thing I say when people ask me, "what do you think causes autism?" is that I'm not an autism expert, but I can tell you which studies are compelling. And I *am* a vaccine expert. "

Thank you for visiting and commenting. One of the comments which I referenced from the AOL article was the one where Dr. Offit and Dr. Dawson were asked:

Dr. Offit responded by pointing to genetics. He did NOT say, or AOL did not report him as having said:

"I'm not an autism expert".

Offit's reliance on incorrect written material from a prominent Neurodiversity advocate lost him a lawsuit and cost him a fine -- e.g. J.B. Handley's libel suit.