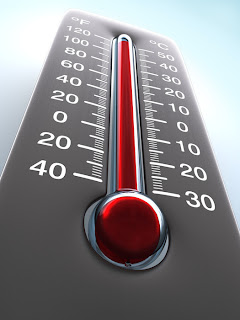 We have been suffering through a pretty severe heat wave, by our standards, here in Fredericton.  But it has not hit the 103 F(39.4 C) temperature in Richmond, Virginia this past Tuesday, the day an autistic boy with asthma, was found left on a hot locked school bus.   I am absolutely disgusted to read the news in the Examiner.com article Pair charged with leaving autistic boy on hot school bus:
"The little boy was discovered by another driver at the city’s school bus depot, when he heard the child’s cries. The 5-year-old was left on the bus for an hour. The windows were rolled up and given the fact that the high temperature in Richmond on Tuesday was 103, the incident could have quickly become a life threatening situation.
Langer told the Richmond Times-Dispatch: “In this heat especially, that child left in a closed vehicle, he could have died. The heat rises incredibly rapidly in a closed vehicle. In the recent weather we've had, it's a real threat.”  The child was taken to CJW Medical Center, and later released."
Photo: Shutterstock


Thankfully the child was well enough to be released but as the article indicates things could have gotten very ugly, very quickly. The incident was also reported in the Richmond Times-Dispatch which pointed out the situation is not unique:
"children get left behind on school buses more often than you might think -- at least one expert with the National Association for Pupil Transportation has estimated it happens 75 times annually nationwide.
Just this week, the Portsmouth School Board was seeking court approval of a $15,000 settlement in a case involving a child left unattended on a school bus in March 2007. The child reportedly was treated for symptoms of post-traumatic stress disorder.
In April, a 2-year-old boy in Brooklyn, N.Y., was left on a school bus for two hours after the driver forgot to drop him off at day care, leaving the boy in the parked bus outside the driver's home until a passer-by heard him crying.
Also in April, an 8-year-old deaf student riding a special-needs bus in Las Vegas was forgotten and left alone in the bus yard. And in Tift County, Ga., a child was left on a primary-school bus."
The Richmond Times-Dispatch properly points out that the driver and monitor have been charged  with felony child neglect but have not yet had their day in court and there may be a plausible explanation as to how the child went undetected on the bus.   But surely anyone, anywhere, working with students, particularly special needs students, should begin their training with an employer by having it drilled into their heads that they MUST on EACH and EVERY trip check the bus carefully  at the end of the trip to  ensure that everyone is off the bus.
Without being glib the rule could be called the "NO CHILD LEFT BEHIND" rule and make sure every driver, monitor etc understands that failure to follow the rule can result in injury and death to a child, and can , and often will, result in criminal charges for those who fail in their duty.
Posted by Unknown at 5:39 am

How hard is it to walk back and forth and look at each seat? It should be standard practice to do a visual to ensure no child is sleeping on a seat and missed getting off the bus.

One more thing, the bus drivers are not the only ones at fault. In this case, who was responsible for getting him off the bus? Was the bus taking him home or to school? If it was taking him home, why didn't the person meeting him at the bus stop respond to him not getting home immediately? When my son was riding the bus, if the bus was more than 10- minutes late, I was calling the school. If the bus was taking him to school, then it is totally the driver's fault.

POAC Autism Services provides free training for school bus drivers and aides to prevent this very thing. We have trained drivers from NJ districts all over the state and the feedback is incredible. This workshop provides an overview of the condition of autism and how it may impact students riding the bus. Participants will learn:
• How to maximize safety for all riders
• How to respond to children who may be experiencing behavior problems
• How to trouble shoot specific problems related to behavior
• Symptoms of autism and how they could potentially manifest on the bus
• How to interface with parents and school staff to make transportation a safe and enjoyable experience

This is a ninety minute workshop and is appropriate for all transportation staff, including drivers, aides, and administration.

Call the POAC office to schedule this workshop at your location. 732-785-1099 www.poac.net

POAC Autism Services provides FREE training for school bus drivers and aides in NJ. This workshop provides an overview of the condition of autism and how it may impact students riding the bus. Participants will learn:
• How to maximize safety for all riders
• How to respond to children who may be experiencing behavior problems
• How to trouble shoot specific problems related to behavior
• Symptoms of autism and how they could potentially manifest on the bus
• How to interface with parents and school staff to make transportation a safe and enjoyable experience

This is a ninety minute workshop and is appropriate for all transportation staff, including drivers, aides, and administration.

Call the POAC office to schedule this workshop at your location. 732-785-1099 www.poac.net

Im curious as a parent of an autistic 6 year old if it would be considered neglect/abuse for a bus to show up to its school 20 minutes early every day since school started and the only reason i found out was my child being written up for jumping over the seat and not following commands?would you be o.k. with this? what should i do?