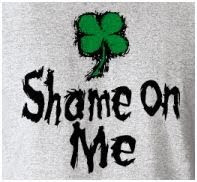 Like many members of the Irish Diaspora, a Doherty of the Great Clann O'Dochartaigh , (1),(2),(3),  I enjoy reading about Irish society and history and reveling in the Irish  music, the literature and the small pleasures of St. Patrick's Day.

I am sadly disappointed though to read that the Irish Department of Education is planning to drop evidence based,  effective  ABA treatment for autistic children in favor or an unproven, non evidence based "eclectic:" approach as detailed in the Irish Times article Best practice autism treatment 'will vanish' under proposals:
"ABA uses behavioural science to assess and treat a broad range of behaviours in individuals diagnosed with intellectual and developmental disabilities. Many academics and support groups say it is a highly effective intervention which has produced dramatic results among children with autism.
However, the Government favours an “eclectic” approach, which it says is based on a wide range of educational approaches, including ABA, a picture exchange communication system, social stories and developmentally based approaches.
In a statement yesterday, the Psychological Society of Ireland’s division on behaviour analysis said that under the department’s proposals ABA schools would simply resemble “eclectic” special schools across the State.
Among the members of the division’s committee are Prof Julian Leslie of the University of Ulster, Dr Olive Healy of NUI Galway, Dr Geraldine Leader of NUI Galway, Dr Maeve Bracken of Trinity College Dublin, as well as Michelle Kelly and Niamh McEvoy of NUI Galway.
The division says research shows that children exposed to the “eclectic” approach do not achieve the same level of gains as children who receive full-time tuition based on the science of ABA.
In addition, it said the department had not produced any research to show the superiority of the “eclectic” approach over ABA."
ABA is the most solidly backed intervention for autistic children, call it a health or education intervention as you prefer. But it is the one intervention with solid evidence in support of its effectiveness. I fully support the rights of families to seek out other interventions and treatments for their children and if they are shown to be working with their child to continue to do so.  I do not support public health or education authorities planning to abandon the most proven method of helping autistic children in favor of approaches with no evidence base.  "Eclectic" is a buzz word and nothing more than that.
Shame on you Ireland. Shame on you.
Posted by Unknown at 7:24 am

Thanks for highlighting this. ABA schools in Ireland need all the friends they can get now, from whatever quarter, if they are to withstand this latest attempt to destroy 10 years good work.

its so funny when governments come up with politically correct terminology to cover up failure. Such as IBI (which is supposed to be a half assed version of ABA or the ABA that doesn't work), Waitlist Management Program, Eclectic approach, Benchmarks, Ombdusman etc.

Hey, don't blame all of us!

Some of us are trying to fight this shameful attack. The Department of Education and Skills have been working on this assault for years and some may be willing to give into the threats to withdraw funding, but many more will not.

We need your help though so if anybody wants to help us, please share your stories of ABA success with the people of Ireland by emailing the editors of the Irish Times and Irish Examiner who are covering this attack.

PS Please follow the guidelines for writing to the editors (full name, address, contact #) and it's probably best if you address each editor individually.

Fair dues for highlighting this Harold. The ABA schools in Ireland need all the support they can get. Fear is driving parents to accept this change we'll all live to regret. As ever it's the children who'll suffer, but we know all about that here in Ireland too. It's sickening to watch a disaster play out in slow motion, powerless to intervene.

Well, take heart, the recent Denver Model study seems to lend some credence to the idea that a good (focus on good,) eclectic approach may well lead to significant gains.

I'm of the opinion, and this is totally unsupported by anything but my intuition, that it is not so much the approach but the educators who matter most. Sure, ABA has impressive results in studies - studies led by tenured professionals with years of experience. Comparing that with the "ABA" that I have observed in dozens of classrooms is all apples and oranges, though.

There is some research to suggest that interventions that are well organized, intense, and incorporate some (not necessarily all,) behavioral principles will have relatively similar success rates.