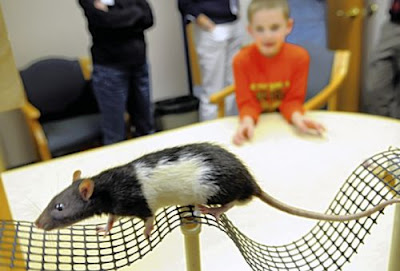 Pam Panchak/Post-Gazette
Although ABA, Applied Behavior Analysis, is supported by five decades of research encompassing thousands of studies, confirming its effectiveness as an autism intervention, the anti-ABA activists continue to rail against ABA. Meanwhile autism continues to see the growth of totally non-evidence based therapies. Some of the stuff is dangerous although some does offer good old fashioned fun, with its therapeutic value, for autistic children. One of the more interesting developments is the use of rats, not as objects of scientific study, but as therapy for children with autism.

The Children's Therapy Center of Washington Hospital in Peters uses rats, as therapy pets, to interact with autistic children. As reported at the Pittsburgh Post-Gazette, "Rats are bringing out best in kids with autism":

"Clients giggle and grin as they interact with Moe and Larry, two tiny therapy animals who are well-behaved and affectionate and who the children call "the pets" or "the little puppies."

The long, skinny hairless tails are dead give-aways, at least for adults, who know what these therapy pets are -- rats.

"Oh yes, many people, including me, had reservations about working with rats," said Ms. Pollock, who is the center's facilitator for pet-assisted therapy. But Moe and Larry and their owner, Drue Tepper, 18, have won over almost everyone during weekly therapy sessions that started in March 2007.

Henry Cicconi, 6, of Canonsburg, has been working regularly with the rats for about 14 months now.

"When Henry started here, he didn't talk. Now he calls the animals by name," said his speech therapist, Lisa Haines."

Maybe the American Academy of Pediatrics will have to revise its "Management of Children with Autism Spectrum Disorders" to add a section on Rat Therapy. In the meantime I think we well stick with ABA for Conor. And activities like swimming and hiking. Rats? I think we will wait for the double-blind, randomized, control study results to come in.

autism
Posted by Unknown at 5:24 am

Think of it as animal therapy. There are lots of existing double-blind studies showing the effectiveness of animals in clinical therapy (though dunno about autism specifically).

What's wrong with rats? They have all the intelligence and personality of dogs, but you can keep them for pennies a day. They are social (unlike hamsters and mice) and they like to be with humans. They learn amazingly fast. They are funny and affectionate, and they feel REALLY nice as they are very soft and have a slightly higher body temperature than we do.

It's pretty sad how misinformed people are, and how much they like to keep it that way. I had to take one of my girls to the vet recently. Just TRY to get a cab with a sick rat! We walked.

I have pet rats and they are very therapeutic for me, I have no doubt they'd be for any children. They are highly intelligent and affectionate creatures. They each have their own personalities. I find them very therapeutic and they fit my lifestyle better than a dog (and I'm allergic to cats). I call them my little doggies because they have the affection and loyalty of dogs, they groom themselves more than cats and have their curiosity, and can be silly like ferrets. Love em!