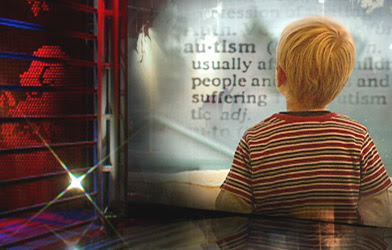 (CBC Image)
CBC has provided a good general overview of Autism Disorders in Canada in Autism Making sense of a confusing world. The overview includes a description of autism disorders, some autism history (Kanner and Asperger) and treatment. There is a good review of the funding and age restrictions for ABA services for autism in each province in Canada.

There is one important omission and that is with respect to New Brunswick. Here we have a 5 year age cut-off as stated. But New Brunswick has begun to provide ABA intervention in our schools. This has been done by training Teacher Aides and Resource Teachers at the University of New Brunswick - College of Extended Learning Autism Intervention Training Program in Fredericton. A couple of classes of the UNB-CEL AIT have graduated, another is about to, and the government of Premier Shawn Graham and Education Minister Kelly Lamrock have committed to provide another 3 years of training for TA's and Resource Teachers through UNB-CEL.

The UNB-CEL Autism Intervention Training Program is a key part of this approach. The program was developed through the University of New Brunswick with input from the Autism Society New Brunswick. This program is critical to ensuring the quality and integrity of the ABA and other autism services provided in the schools. By training TA's and Resource Teachers the education system's existing human resource system is used to the maximum extent possible. Some Autism Support Workers and Clinical Supervisors have been recruited by the Education Department itself. These people have been trained through a parallel program offered by UNB-CEL so the transition into the Education system is relatively smooth.

There is with any such development resistance. Some senior Education Department careerists have preferred to struggle against the UNB-CEL training in favor of "in-house" training combined with a commercial internet training program but, to date, they have not prevailed. The CUPE local representing Teacher Aides have also filed grievances on behalf of its members since not all current TA's meet the UNB qualifications for admission to the Autism Intervention Training Program. As a labour lawyer I understand the role of the Union in protecting ALL of its members interests but the long term interests of the greatest number of their members is best protected by providing the autism training to those members who qualify for admission. And I would expect that any labour arbitrator hearing these grievances would give the greatest weight to the best interests of the child principle in arbitrating these grievances - in these cases the best interests of children with autism disorders.

autism
Posted by Unknown at 4:56 am