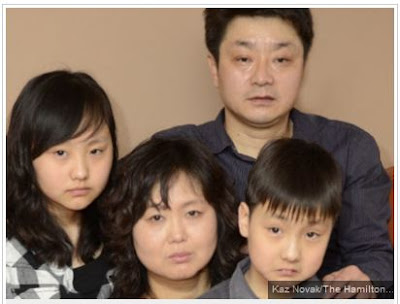 Image by Kaz Novak, The Hamilton Spectator
An immigrant South Korean family, Sungsoo Kim, wife Sunmi Kim, daughter Lisa and son Taehoon, have been living in Canada for the past 9 years. A permanent residency application has been rejected  by Canadian officials because the 12 year old son   is autistic.  He  received the autism diagnosis several years ago but after he and his father, Sungsoo Kim,  had arrived in Canada.
Change is difficult, very difficult, for many people with autism disorders.  For my severely autistic son slight changes in his daily routines and expectations can result in serious problems.  I can not imagine the harmful impact on this 12 year old autistic boy,  to be sent to another country now, after growing up in Canada over the past 9 years.  He has South Korean heritage, a Korean name and family but this boy after spending 9 of his 12 years in Canada IS Canadian.
I understand the costs argument but it is still heartless for Canada to send this autistic boy to live in  a country he does not know, absolutely heartless.   If and when harm comes to this boy from this decision Canada must bear a major part of the responsibility.
I am generally very, very proud to be Canadian but I am not proud of the way we treat good people who have chosen to live among us and become part of Canada because a child is diagnosed after arrival with an autism disorder. Woe, Canada!
Posted by Unknown at 6:45 am

very sad indeed. Personally I do not understand the cost argument (for autism treatment), considering the millions of dollars in wasted funds being syphoned in to failing school programs and extended school hours...

This is heartless. We were in a similar position while trying to immigrate. We found Canada and Australia will not take us. UK allowed us immigration-knowing that our son is Autistic.
Our son goes to a very good school and my wife works for a Mental Health Trust. She is in the process of setting up a business that will provide employment for Autism in the UK. We are proud British Citizen and want to give back to the society that has given us hope. Shame on you Canada and Australia.

Thanks guys for giving me some comforting words. Im in d same situation as Shazzz and i decided they can go and stick it... my daughter is very talented with lots to gifts and talents. i hope in future she can and will show the Uk that they made the right decision about her.

we are applying for permanent resident too in canada but my family are still in my home country i have a son with mild autism according to the assessment for medical exam. is it possible to say we are not taking any money from the canadian government for my son with autism if thats the case for us to be denied. i canwork for my sons future dont really need their money

It's cruel and barbaric to that poor autistic child. Canadian immigration department should be taken to the international human rights court for this action. They are not only heartless but have no souls either.