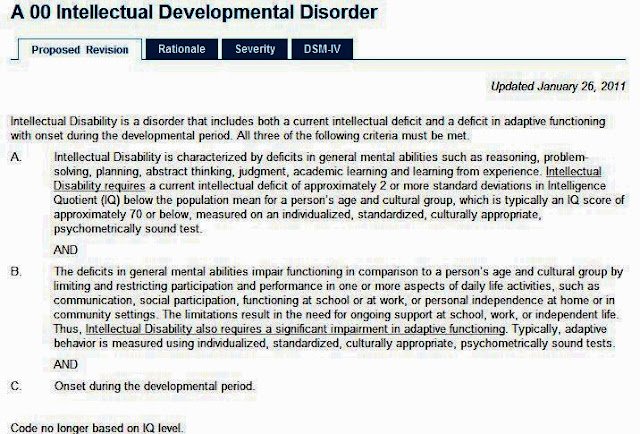 "Catherine Lord, the director of the Institute for Brain Development at NewYork-Presbyterian Hospital, and a member of the committee overseeing the [DSM-5 autism] revisions, said that the goal was to ensure that autism was not used as a “fallback diagnosis” for children whose primary trait might be, for instance, an intellectual disability or aggression." [Bracketed terms added for context - HLD]
- Dr. Catherine Lord, as reported by NYT High Functioning Autism/Asperger's reporter, Amy Harmon, A Specialists’ Debate on Autism Has Many Worried Observers, New York Times, January 20, 2012
The above reference to, and quote of, Dr. Catherine's Lord about the DSM-5 committee's intent to exclude intellectually disabled from further autism diagnosis was important journalism by Amy Harmon even if it was simply an inadvertent by product of her exploration of HFA and Asperger's in the DSM-5's New Autism Spectrum Disorder.  Ms Harmon has shown considerable interest in HFA and Asperger`s while largely ignoring those severely affected by autism disorders.  To here credit her article about worried observers relates primarily to those high functioning groups but did cough up the above confession by Dr. Lord.  Ms Harmon consistent with her slant towards covering High Functioning Autism  then moved on and glossed over the admission by Dr. Lord.  In Amy Harmon World as in Dr. Catherine Lord`s DSM-5 the intellectually disabled just don`t count and will be excluded from the Brave New Autism Spectrum Disorder.
To my knowledge I am one of the first, and few, persons to comment on the intentional exclusion of the intellectually disabled from the autism spectrum in the DSM-5; despite their historical presence on the "spectrum"` as a vast majority of those with classic Autistic Disorder. One person who pursued my concerns was Lisa Jo Rudy, then of the About.com autism site, who obtained the following information from Dr. Bryan King of the APA's DSM-5's Neurodevelopmental Work Group:


"My Question for Dr. King


There seems to be a desire to remove people with "Persistent deficits in social communication and social interaction across contexts, not accounted for by general developmental delays" from the ASD category. Does this mean that a child with Mental Retardation (also called Intellectual Delays) no longer qualify for an Autism Spectrum diagnosis? Would that person wind up dually diagnosed with Intellectual Development Disorder and social communication disorder rather than with an ASD diagnosis?


There is no explicit desire , however, by creating more specificity we believe that people may be given diagnoses that better capture their individual conditions. The qualifier above about general developmental delays ensures that the social communication deficits are more specific, and also potentially allows for earlier diagnosis if appropriate.


Just as typically developing infants and toddlers are able to engage in very rich social communication and interaction across contexts, appropriate to their developmental level, so too most individuals with intellectual delays or disabilities are also able to communicate. On the other hand, significant deficits in social communication in toddlers may suggest the presence of autism. What the criterion above is meant to ensure is that clinicians take into account what is typical in terms of social communication abilities at a given age or developmental level, and not assume, for example, that a lack of social perception in a teenager with intellectual disability not automatically suggest the presence of autism. As is currently the case, some individuals with Down Syndrome may also meet criteria for autism; but most will not."

When I read Dr. King`s reply to Lisa`s question I was skeptical. I had difficulty rationalizing his answer with the express wording of mandatory criterion A of the DSM-5`s new Autism Spectrum Disorder which requires the presence of "persistent deficits in social communication and social interaction across contexts, not accounted for by general developmental delays"

Dr. King stated that it was not the DSM-5 committees`s intent that children with mental retardation (now to be known as Intellectual Developmental Disorder) would be disqualified from receiving an Autism Spectrum Disorder diagnosis.  Dr. Catherine Lord`s appears to say exactly the opposite.  Dr. Catherine Lord takes issue with the Volkmar data base and study that has prompted the current fears over exclusion of persons with HFA and Asperger`s from a DSM-5 Autism Spectrum Disorder diagnosis.

Dr. Lord is undoubtedly correct and Amy Harmon and the New York Times need not worry.  The DSM-5 targets for exclusion from the new ASD diagnoses are not those with HFA and Asperger`s.  Those who will be excluded are the invisible autistics who are not featured in the NYT or in Hollywood movies.

Yeah I remember reading about it here way way before, and now there are articles abound the internet about it and people are waking up!

Hm. If these people were in charge of regular medical practice, I'd go to a doctor for my arm hurting, who would inevitably prescribe a sling and a painkiller, whether the real problem was a bruised arm or a broken one.

Harold c'mon. Enough of this scaremongering. There are real and important issues to debate about the development of DSM 5. This isn't one of them.

"the goal was to ensure that autism was not used as a “fallback diagnosis” for children whose primary trait might be, for instance, an intellectual disability or aggression."

Here (again) is the response from Prof Francesca Happe (also involved in DSM 5) when I alerted her to your concerns in June last year:

"It had not occurred to me that our wording about general developmental delay could lead to excluding people with ID from ASD - certainly not the intention."

Perhaps the most clear and convincing way to prove the DSM V revisions are arbitrary, capricious, and irrational discrimination under Title II of the Americans With Disabilities Act and Sec. 504 (in the US) is Catherine Lord et al's "revision" of the three categories you mention does not ANYWHERE address the so-called high functioning person with Autism who can ONLY demonstrate the so called "high functioning" Online, but is as severely Autistic as a person can come IRL (in real person). Likewise, if the Autistic person is judged in person, they could be given one of the Intellectual Disability classifications, despite being able to effectively communicate Online(and have an American Bar Assn accredited law degree). The DSM V "revisions" ARE NOT SCIENCE-EVIDENCE BASED. How is the gut microbiome PHYSICAL bacteria differences biomarker of Autism a "mental disorder" to give the DSM V jurisdiction over these Autism physical medical conditions ? Catherine Lord was in no small part responsible to screwing up Autism diagnoses and funding in Michigan, before she had to jump ship and feel Michigan. The DSM V has NO credibility and should be sued for injunctive relief to bar use of it for Autism and the other "revised" conditions.

Jon Brock your condescension is noted and is of no persuasive value. The "scaremongering" you refer to is nothing more than name calling and could equally be written about the Asperger's articles in the NYT that precipitated the latest round of discussion. It could also be applied to articles about PDD-NOS and the DSM5 at the "Thinking" Persons Guide to Autism.

The intent of any written document whether in law, which I have practiced for 28 years, or in psychiatry/psychology is determined first by what is written in the document. In the instant case the description for the new Autism Spectrum Disorder uses language "not accounted for by general developmental delays" which is similar that used in the DSM-IV to exclude an Autistic Disorder diagnosis where Rett's Disorder is involved: "C. The disturbance is not better accounted for by Rett's disorder or childhood disintegrative disorder".

Your reference to the statements of intent by some involved in the DSM5 process also ignores entirely the "unintended consequences" of the DSM-IV as articulated ad infinitum by Dr. Allen Frances of the DSM-IV oversight team. Your reliance on such statements of intent also ignores the express confession by Dr. Lord. The aim is to reduce the number of "co-morbid" ASD and ID diagnoses.

You may place great reliance on the word "fallback" as a research professional with a Neurodiversity ideological outlook. As the father of a severely autistic son I don't place my son's realities on such a flimsy basis.

Please be clear on one thing ... I am offended by your dismissal of my concerns on this issue directly related to my son's well being which you, not surprisingly given your Neurodiversity leanings, dismiss as unimportant.

This is the information I was looking for.