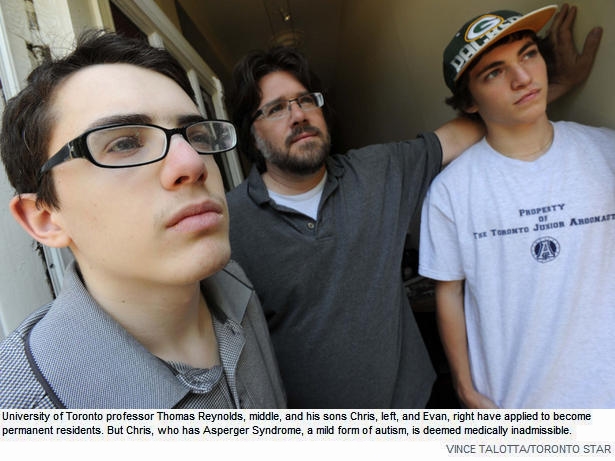 
Nicholas Keung, immigration reporter with the Toronto Star reports that a Toronto family will be ripped apart by a Citizenship and Immigration Canada  ruling that University of Toronto professor Thomas Reynolds son Chris is is medically inadmissible to Canada and therefore ineligible to stay with his father because of his Asperger's Disorder and Tourettes disorders. As reported by Nicholas Keung:
"Born in Nashville, Tenn., Chris, an American citizen, has lived in Toronto since 2007, with his expatriate father, a tenured theology professor at the University of Toronto’s Emmanuel College, and younger brother, Evan, 17, who is still in high school — both here on their father’s work permit. Shortly after arriving in Toronto, the family applied to immigrate from within Canada.

An early medical assessment by Citizenship and Immigration Canada concluded that Chris would place an “excessive demand” on health and social services, and hinder the family’s chances of being accepted.

Officials never met with Chris but deemed him “medically inadmissible” and estimated his care could cost Canadians $7,000 a year."
It remains to be seen whether people in Toronto and Ontario will exert the kind of pressure necessary to pressure politicians to take action to stop the division of this family.  New Brunswick is a small province where the Cheers refrain  "everybody knows your name" rings very true. Ontario, where I attended high school (Petawawa)  and Toronto, where I have previously worked and  lived are obviously much larger, urban and complex entities than New Brunswick.  Will the plight of one family facing division drive the good people of Ontario to take the intense, sustained action necessary to move politicians and bureaucrats to reverse this family dividing decision?
Personally I hope so.  In the Reynolds case two sons have been living here for 4  years with their expatriate father who is a tenured professor of theology in Toronto.  I am very uncomfortable with Canada breaking up or exporting families solely because a family member has an autism spectrum diagnosis or any medical condition. There are differing opinions on these issues but I don't like it. To me it doesn't feel right. It doesn't feel Canadian. I am hoping for a Vancouver victory in the Stanley Cup Final tonight and I am hoping for a Reynolds family victory in their struggle to stay together. One family. In Canada.
Posted by Unknown at 5:12 am

I hope the Canadian government decides to let them stay. Breaking up a loving family is never justifiable!

What's the fascination lately with harassing people with disabilities who are in Canada legally and whose parents work? Aren't there other people they could harass who deserve it more?