Severe Autism Reality: Desperate BC Mother of a Severely Autistic Son Ends His Life and Her Own 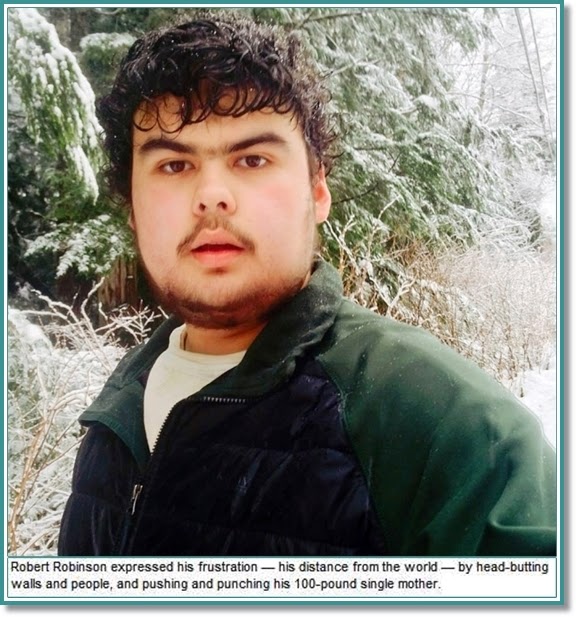 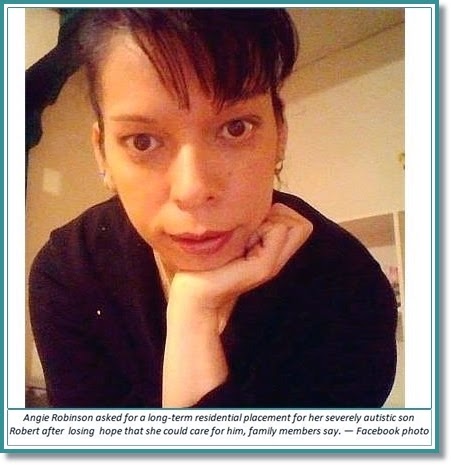 
As reported by Sam Cooper in The Province April 23, 2014 a small and desperate Prince Rupert, British Columbia mother has killed her large. powerful, self aggressive, autistic son and then killed herself.  Members of her family shared their story with The Province hoping to increase support for autistic children in northern BC. The article indicates that the son, Robert,  weighed approximately 270 pounds.  His mother Angie Robinson weighed 100 pounds.

Angie Robinson's son Robert engaged in very severe self injury including smashing his head through the rear window of Angie's pick up truck and getting worse afterward until he had to be taken to a hospital and sedated with heavy doses of Ativan.  It is believed that Angie Robinson killed her son with a lethal dose of Ativan. The mother had gown desperate from a lack of support and no longer believed she could care for her son.

According to The Province article the mother, Angie Robinson, left a final Facebook post before ending her life:

"On 11:56 a.m. on April 2, Angie Robinson wrote a last Facebook post: “More, more, more needs to be done for our teens with special needs, they are neglected … Canada needs more residential and respite care for families hoping to keep their children at home.”"

News of this tragedy will provoke more outrageous, ridiculous attacks blaming deaths like those of this desperate mother and her son on parents and organizations who provide honest descriptions of severe autism disorders.   Those who believe that autism is just a different way of being, a joy, even a blessing, will simply ignore the hard evidence, the hard reality, that parents of severely autistic children actually live first hand.

Sadly, this is not the first such incident in Canada or the US. The inadequate group home networks can not provide the necessary long term professional care for challenging, severely autistic adults like Angie Robinson's son Robert.  A decent modern professionally run and staffed permanent residential care system is needed in BC and elsewhere in Canada ... including New Brunswick.
Posted by Unknown at 7:44 am

Heart and soul to them and all those struggling...

I just saw a feature on CTV news about a place called Creole house in Louisiana. It's a residence for adults with autism. Could be something worth checking out.

Canada needs a National Autism Strategy, only then will all that deal with Autism on a daily basis get equal treatment across CANADA.

This is such a tragedy! I wish that more could be done to help and support families who are in such dire need. It really breaks my heart to read a story like this. People will print and focus on things like anti-vaccine debates but not a story such as this one. It would make people see that there are much more urgent and important issues with autism than what usually gets national and international press. I am so sorry to hear this very sad story.

I point fault at the government for not helping this mother by putting the son in a group home or institution where he needed to be.

I'll turn and point my finger at anyone who blames the mother and let them know they are part of the reason this is happening.

I'll turn my finger to pro-autism groups that want autism to be treated like a culture and not a mental illness and let them know this is entirely their faults and will keep happening as long as they spread their autistic evolution propaganda.

@Grover Rockwood--just an FYI, autism is NOT a mental illness. It is a neurological/biological disorder. Would you call Parkinson's, MS or Alzheimer's mental illnesses? Of course not so please don't call autism a mental illness because it is not. Our kids are not mentally ill. How insulting.

That being said, I'm just waiting for the Shannon Rosas, Jessica Wilsons and Emily Willinghams of the autism world to come out and say what a devil this mother was and how wonderful they are as parents.