CBC Inclusion Interviews: What Did Smith and Carr Mean By Inclusion? 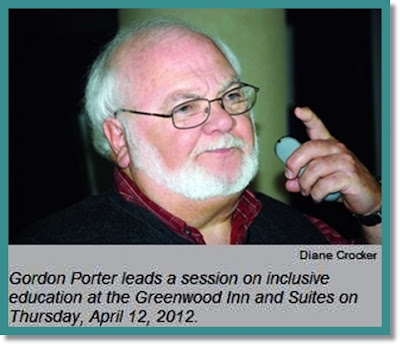 CBC's Terry Seguin conducted two very good interviews with outgoing NBTA President Heather Smith and EECD Minister Jody Carr over the last two days.  However, neither of Terry's guests gave a clear definition of what they meant by "inclusion".  The only clear definition of inclusion offered by the current administration is one provided by the Alward administration's inclusion mentor Gordon Porter. It is a definition of inclusion which Minister Carr has not disavowed and one which is at odds with the New Brunswick government's policy statement which defines inclusion as evidence based and based on a student's best interests.

The source of much of the uproar over inclusion in NB is Mr. Porter's obsessive insistence that ALL students be educated in the regular classroom as he stated last year in a session on inclusive education in Newfoundland:

"CORNER BROOK — Gordon Porter believes inclusion is the most natural thing in the world. The educator and director of Inclusive Education Initiatives presented a session on inclusive education at the Greenwood Inn and Suites on Thursday. Porter, who is also the editor of the Inclusive Education Canada website inclusiveeducation.ca, spoke to parents, educators and agency professionals who deal with children with special needs at the pre-conference for the Newfoundland and Labrador Association for Community Living Conference taking place in the city today and Saturday. The session was sponsored by the Community Inclusion Initiative.

Porter’s session revolved around the theme of parents and teachers working together to make inclusion work.“It means kids go to their neighbourhood schools with kids their own age in regular classes,” said Porter.“If you’re seven years, old you go to the school just down the street. You go in a class with other seven-year-olds, and you’re supported if you have extra needs. “It’s so simple, it’s that simple,” said Porter.""

For some children with challenges, including some like my son with severe autism, inclusion in the classroom was not simple or natural.  He was overwhelmed by the classroom environment and came home each day with self inflicted bite marks on his hands and wrists.  He  was removed from the classroom at our request and  received his instruction from UNB-CEL Autism trained education aides at alternate locations in grade school, middle school and high school.  The biting disappeared and he was able to receive the education promised to all children in New Brunswick. He was accommodated.

Now my son's alternate learning locations are targeted as "segregated" learning by the omniscient Mr. Porter. The accommodation of my son's  disability that has allowed him to receive his education in local schools is at serous risk of disappearing when the Porter Aucoin Report becomes fully implemented in 2013.  It seemed to me in listening to EECD Minister Carr and NBTA President Smith that they were not challenging Mr. Porter's "everyone in the classroom" dictate.  They appeared to disagree only over how many aides would be in the regular classroom to assist the teacher.  My son's accommodated education is at serious risk in the Porter era.
Posted by Unknown at 6:31 am

Email ThisBlogThis!Share to TwitterShare to FacebookShare to Pinterest
Labels: inclusion

Gordon Porter is one of the biggest obstacles when it comes to inclusion. We witnessed this first-hand didn't we Harold. His ideology of total inclusion in the classroom grossly mistaken.
Oh...he will tell you differently but that is not he practices in his 'plum' position at the DOE!

Just be happy you will probably get a warning. I'm sitting here in limbo just a few weeks before the end of school and my kid is off to see a classroom he may never attend in Sept this morning.

Told you ID was more important than ASD to get services.