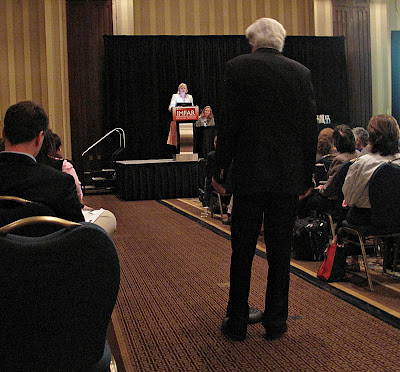 
Dr. Susan Swedo of the DSM5 autism committee presented a defense of the proposed DSM5 Autism Spectrum Disorder twice yesterday at IMFAR in Toronto.  After the second presentation I jumped up to the mike and asked about the exclusion of Intellectually Disabled under the exclusion wording "not otherwise accounted for by general developmental delays" in the wording for Mandatory Criterion A social communication categories. I was advised that some but not all ID would be excluded.  A couple more questioners approached the mikes on both sides of the room including Dr. Edward Ritvo author of Understanding the Nature of Autism and Asperger's Disorder: Forty Years of Clinical Practice and Pioneering Research.  Dr. Ritvo asked pointed questions about the risk-benefit analysis of introducing the new DSM5 ASD and did not appear happy with the answers he was getting from Dr. Swedo who switched the questioning to the other microphone where Dr. Marshalyn Yeargin-Allsopp was waiting to make a point.  As a layperson, a parent autism advocate with concerns about the DSM5, I am happy that Dr. Ritvo added his prestige and expertise to the debate about the wisdom of the DSM5 autism do-over.  I hope we hear more from Dr. Ritvo on this subject.
Posted by Unknown at 10:50 pm

The only reason some professionals want the DSM changed for autism is because it's too hard for them to research severe autism with severe intellectual challenges. They would rather deal with the easiest cases so they can get quick results that generate more funds for more research and it's looks better for autism fundraising benefits.

I think you need to look beyond autism,and see how NIMH has dumped the DSM for their own system based on biomarkers.
http://www.nimh.nih.gov/about/director/2013/transforming-diagnosis.shtml

We also saw a lot of mainstream places,like Scientific American come out and say the APA are pharma shills,who have let the drug companies influence what goes in the DSM.That there are more drugs for "mental illness" than ever,but the rates keep going up.

Dr.Insel raised a point I had thought of a lot in the last few years.The DSM is outdated,and needs to go.I think the drug companies play a big part in keeping it going.Both autism,and schizophrenia,are being shown to have many different forms and causes,with metabolic and autoimmune causes being the most common.We need to scrap the entire model of mental and neurodevelopmental disorders we have had for over a hundred years,and that will not be easy.A lot of people will resist.

I am convinced many of these families you read about on Age of Autism,whose children regressed after vaccines,with multiple medical problems,were born with some unidentified inherited autoimmune disease,that made them vulnerable to an autoimmune brain infection,like autoimmune encephalitis,that became self perpetuating.

The number of children born in the last couple decades with these autoimmune complexes,and/or intellectual disability is staggering.I think Jill Escher is right.This is an (epi)genetic epidemic,and both the antivaccine people,and mainstream science have their heads in the sand.