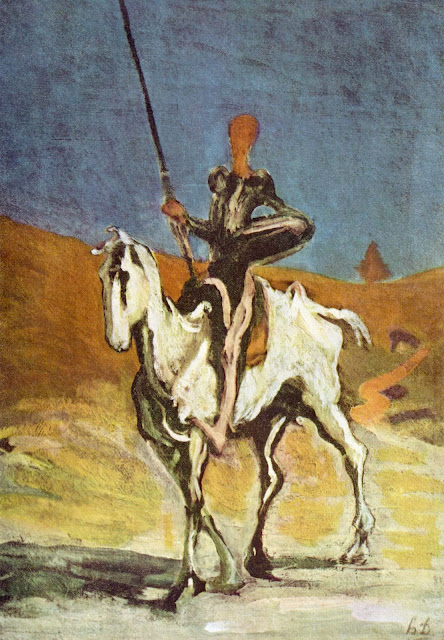 Don Quijote by Honoré Daumier(1868)
Discussing autism issues on the internet often invites wild and baseless accusations no matter what point is being made.  Mention the word vaccine though and you can be guaranteed someone will react irrationally.  Such is the case of Kev Leitch, a knight errant  in search of a battle in which to prove himself,  who has falsely accused me of being an "anti-vaxxer".  For the record both of my sons have received the recommended and required vaccines,  I have never attributed my youngest son's autistic disorder to receipt of any vaccines and I have often recognized the important role of vaccines as a public health tool which has prevented and controlled some deadly diseases.  So why does Kev call me an "anti-vaxxer"?
My sin? I keep an open mind on issues about vaccine safety, the extent to which vaccines are used today and the way in which they are pushed and promoted in our modern society.  I particularly object to the constant smearing and marginalizing of anyone who questions vaccine safety.  Kev Leitch is one of those who, for reasons unknown to me, feels compelled to twist and slant comments of anyone, even this humble blogger, who do not treat vaccine issues as though they have been decided for all time by some holy text.
Sir Kev's need to defend vaccines from all threats real or imaginary, present or anticipated, emerged again in this post  in which he accused me of  being an anti-vaxxer and making "implied" false statements.  Making an implied false statement is quite a trick.  I have no idea how I did it or what false statement I implied but I will leave that explanation to Sir Kev:
"However, as ever in the world of autism, the world of the anti-vaccinationists are never far behind. This passage from Harold Doherty demonstrates this bizarre need to always conflate the two:

The Poling family was successful in advancing a vaccine injury claim on behalf of their daughter Hannah Poling to the point of settlement by US authorities. Hannah’s father is Dr. Jon Poling, a practicing neurologist in Athens, Georgia, and clinical assistant professor at the Medical College of Georgia. He reviewed his daughter’s case in the Atlanta Journal-Constitution on April 11, 2008. In his comments Dr. Poling explained how mitchondrial dysfunction was related to his daughter’s case and to the existence of a possible mitochondrial dysfunction subgroup of autism disorder. He also discussed, as a medical doctor who expressly recognized the importance of vaccines in preventing serious diseases, the need for public health authorities to abandon fear tactics and conduct research to restore confidence in public health authorities and vaccines

In order to try and staunch the upcoming flood of misunderstandings and false statements like those implied by Doherty (and John Poling whom other mtDNA specialists such as John Shoffner clearly don’t trust on the issue), I contacted Professor Giulivi and asked her three simple questions about the study she is lead author of. She supplied three simple answers.
KL: Do you think, based on available science (including your paper) that vaccines cause autism?
CG: We do not have any evidence for this in our study. Our study was cross-sectional not longitudinal so it cannot point to any cause (not just vaccines), meaning we do not have anydata supporting one way or another."
At no point in my comment did I state that vaccines cause autism. I have never, ever stated that vaccines cause autism disorders and that was not implied in my article.  My position on autism disorders generally is that we do not know specifically what causes them but they appear to be caused by the interaction of genetic and environmental factors.  We do not know what specific environmental factors are involved because so little research has been done on the environmental side of the equation.  There are many possible environmental factors which MAY cause autism disorders including vaccines, particularly those given to pregnant women. I have maintained, and still do, that more research should be done on all possible environmental causes or triggers of autism disorders including possible vaccine triggers.  For taking these positions Kev Leitch falsely accuses me of being an "anti-vaxxer".
Nor did I state or insinuate in my comment that mitochondrial dysfunction causes autism disorders.  I did indicate that the study will prompt much more research on possible connections between mitochondrial dysfunction and autism disorders.  I also  commented on the fact that any mention of  a possible connection, and of a possible vaccine connection, would result in more of the kind of smearing and marginalization that was seen in the Economist article that I had referenced.
The Economist article that I quoted in my comment was a knee jerk attempt to find a target (lawyers) in anticipation of issues arising from the Autism and Mtiochondrial Dysfunction study.  Kev Leitch has, once again, done exactly the same ... as expected.

On to the next windmill Sir Kev.
Posted by Unknown at 6:41 am

Every Batman has a Joker.

Very Good post Harold. I have recently been following what Kev Leitch has to say and concluded that he together with a handful (only) of noisy followers have very bias views on autism intervention. Either these people have been used by other more important forces to oppose valuabe interventions and a more in-depth understanding of what autism is or they have some sort of mental or emotional problem themselves.

The good thing is that it's pretty obvious to anyone that their arguments have very limited value.

As mentioned on the Autism Speaks Blog, " Kev should sale cars".

He will not change a single thing in autism and I am pretty certain he could not care less anyway.

He is useless and contributes absolutely nothing to better understanding autism or the treaments for it. He is a self absorbed loser who likes to hear himself rant. His small band of followers are much the same.

As I commented at Life in the House that Asperger built, I do not believe you are anti-vaccine; it is not a label I would apply to you, nor would I lump you in with those who are devoutly anti-vaccine and believe the vaccine program to be a eugenics program.

While we disagree on a fair amount, there is much we are in agreement on, and I thoroughly enjoy your posts concerning Conor.

KWombles thank you for your comments about the anti-vax label and about Conor.

As for the other matters on which we disagree I remain hopeful that you will see the light and change your mind.(Juuuuuuuuuuuust kidding)

:-) Thank you for the chance to chuckle!

There are know thousands of children in England who are Autistic Kev Leitch thinks that the parents of Autistic children who have been vaccinated are anti- vaccine if we were anti -vaccine we would not have had our children vaccinated know would we but we are most certainly anti- vaccine know , Kev you need to grow up

Your blog is always well reasoned, rational and thoughtful. How anyone could call it 'anti-vax' is beyond me.

If autism was entirely genetic, the parents of autistic children would have it (as would their grandparents). And it would be steadily reducing in the population.

If autism isn't entirely genetic, it has a cause (or causes). And anyone who claims a particular source of a possible causal agent *shouldn't* be investigated is either mad, or, worse, works for companies afraid of liability.