2010 Autism Picture of the Year 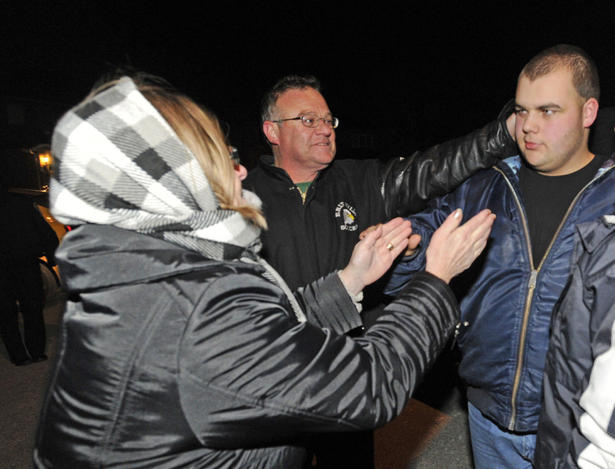 The best "autism" picture I saw in the mainstream media during 2010 is the Rick Madonik/Toronto Star picture, above,  of Robert Capovilla,  a young, low functioning autistic man,  shown being reunited with his parents after being lost in downtown Toronto, in biting cold weather,  for more than 24 hours.
The picture speaks for itself.
Posted by Unknown at 4:07 am

We have a son Benjamin age 9. Diagnosed at age 3. Reading Evidence of Harm was a major breakthrough for us in understanding, accepting and dealing with this scary, unknown orgin disorder. Benjamin has taught our family so much about love without words. It has been a crazy journey and continues, but I believe, we as parents of these awesome, smart, beautiful children we should never lose hope. Maybe that is just a statement every mother makes, but I truly believe they all have so much to offer this world and teach us. Not all are alike but each has their own special qualities. I pray the world will see this and accept them, not as disabled or diseased but special and beneficial all. I also pledge to do all I can for Autistic people and to never give up! We place so much on communication and spend so much time in this area, and they have so much information stored in their brain, we communicators have no idea. Thank you for all you do in awareness and putting faces with this diagnosis. They are people AWESOME people.

Scary AND incredible. I cannot imagine how his parents must have felt.

I have to agree with you. That picture worth a million dollar. You can see the love and caring. I wish all parents of an autistic child be this way.They are unique, smart and loving. Words are cheap, actions are what matters, but we became the society of talking with little or no actions. these kids showing us what really matters and what really is superficial.