Music Off, Music Off: Noise Can Harm a Child with an Autism Disorder 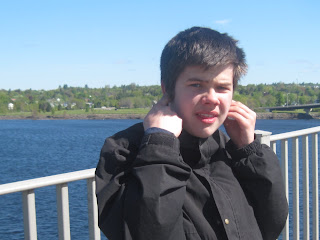 Noise can be a big problem for some people with autism disorders. A Noisy Nightmare by Hugh Adami in the Ottawa Citizen, tells the story of Bailey Gauthier and her autistic son Dominic who had to leave their Ottawa area apartment and move back home with Bailey's parents because of the impact on Dominic of persistent loud music  from a  neighbour and the inability to obtain relief from an  unsympathetic landlord. The noise was actually harmful to Dominic:
“Music off, music off,” a panicked Dominic would shout after the neighbour’s stereo started to blare. In an attempt to block out the sound, Gauthier says Dominic would repeatedly smash his head against the wall, slap himself and throw things.
Gauthier would physically restrain him, but that would be a frightening ordeal, too, as Dominic would begin to hyperventilate and foam at the mouth. He would kick and scratch his mother. Gauthier would even take him for drives to get him to calm down and fall asleep."

Obviously noise can not be eliminated from life. When it reaches certain levels it can be dangerous to anyone though and for some with autism that level is reached at a different point because some people with autism disorders are particularly sensitive to noise. Noise generated persistently by an unresponsive neighbour in an apartment complex caused serious problems for Bailey Gauthier's son, Dominic.
We don't live in an apartment but the effect of environmental noise on Conor is still obvious.  Walking at this time of year brings great joy for us and Conor and Dad enjoy it. But you do get more motorcycles with the  amplified noises that many bikers enjoy.  Even the wind can cause Conor to react briefly as he did in the photo above.  The wind will occasionally blow in strong gusts crossing the Westmorland Street Bridge as it did yesterday and the metal rails will generate brief outbursts of very loud, humming sounds.  Fortunately such environmental noises tend to be brief or you can simply continue on to avoid them.

When the noise is loud and persistent though, when it strikes a child with an autism disorder in his home ,as it did to Bailey Gauthier's son, serious harm can result and moving out may be the only real option.
Posted by Unknown at 4:55 am

Obviously music when reaches certain levels it can be dangerous to anyone though and for some with autism that level is reached at a different point.