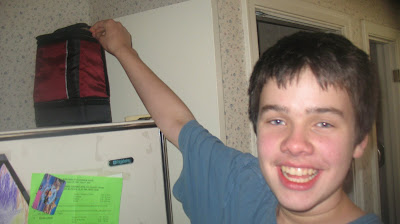 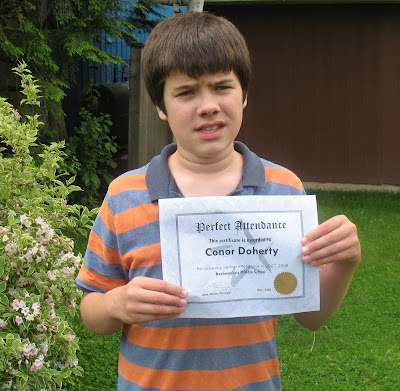 Conor has been counting down the days to school much of which is based on ABA (Applied Behavior Analysis) instruction in a room alone with an ABA trained (UNB-CEL Autism Intervention Training) Education Assistant. Conor loves school, including his ABA, as I have written about several times.

Today at about 6:30 am Conor came and got Dad to tell me "2 more days to Middle School". He has been asking about (Nashwaaksis) Middle School for the past few weeks. Some mornings he gets up and grabs his school lunch bag off the top of the fridge (top picture, above) telling us clearly that he wants to get back to school. He has also been joking about school, making comments about Conor going to Nashwaaksis Memorial where he attended grade school. When we agree he laughs and says "Noooooooo Memorial ... MIDDDDDLE School!".
The bottom picture, above, is a re-post of a perfect attendance record from his first year at Nashwaaksis Middle School, 2 years ago. Last year Conor missed a couple of days because of flu and because of a dental operation so he didn't get the perfect attendance certificate but he still came pretty close.
Those who allege that ABA turns children robotic, or is otherwise abusive, are creating a myth, Autism's Biggest Myth. They have no evidence, no studies, on which to base this myth. It is just the opinion of people with very little real exposure to ABA. Conor has loved the ABA instruction he has received. Because of the determined Autism Advocacy of some dedicated parents here in New Brunswick and a government that listened, both to parents and to the decades of research supporting the efficacy of ABA as an autism intervention, Conor has been able to receive ABA based instruction in school for the past several years ... and he loves every minute of it.
To Michelle Dawson and other spreaders of Autism's Biggest Myth ... you are wrong .... and you have nothing to back up your prejudiced opinions about ABA. Your opinion about ABA effectiveness is rebutted by hundreds of studies and dozens of credible professional reviews. Your myth about ABA abuse of autistic children is rebutted by .... Conor's very expert, very well informed, opinion.

NOTE: Even as I am writing this comment Conor came in to the kitchen from the back step where he is playing with water balloons to say "Middle School Breakfast" to his mother. He wasn't telling her he wanted breakfast ... he was telling her what was on his mind ... getting back to school.

Wishing Conor a great start to the school year!

And I hope Charlie too has an excellent year at school.


We hope that you and your family had a relaxing summer. Lea was taking in the Montreal weather (plenty of rain), and relaxing in our wonderful city. We went to Jamaica for two weeks. Just got back to the regular routine,school,work and such...been very busy finalizing our book,conferences,workshops and fund raising events.

Wishing Conor a wonderful school year.... with plenty of hugs.

Mine are SOOOO ready to go back as well. Both my NTs and my autistic cutie.

I love Conor's joke. You just can't fake that kind of enthusiasm!

We don't have ABA here in SK, but my son giggled on the morning I woke him "for the bus". His teachers also reported that he had smiles and hugs for them that day too. It makes me feel like we must be doing something right. I still wish we had more autism-specific programming though.

I hope Conor has a wonderful school year.

There is a local woman who,while she isn't an official GR "Rescue Angel",she has done a lot of the same things for me.Paying for treatment out of her credit card,I don't have one,and then having me repay her, driving me to the DAN! doctor in another county,and such.

Her autistic son is also nonverbal,and is about a year or two ahead of Conor in school.Meeting them has really gotten me wondering just how schools teach nonverbal children.I think a lot of us who don't have children in that position would be very interested in knowing.

Best of luck to Conor and I hope he has a great year at school!

In regard to ABA and Autism's Biggest Myth, I both agree and disagree. I am a speech therapist. There is lots of research to back the efficacy of speech therapy in advancing language development. However, I have had parents tell me that they tried speech therapy and it was totally worthless, and I don't doubt it. Likewise, I've personally witnessed 'overly rote' (I hate to use the word robotic, these are still kids) behaviors as a result of ABA.

Then again, I have seen both speech therapy and ABA work wonders. The point is, no matter how much research you do, unless all programs are identical, it will always come down to the quality of the program. There are good programs and adequate programs and just plain bad programs.

I am venting a bit because I'm currently dealing with an ABA program where kids with little to no spontaneous language are sitting and recited things such as "George Washington was the first President." Candy given. I'm getting resistance to my ideas that maybe, just maybe, we should teach them to talk about what they played at recess, or what they had for lunch, or just teaching them to enjoy playing a game with another human being, before we worry about how old Obama currently is.

Needless to say, the kids flee to the computer and shut out all interaction as soon as the coveted 'Go Play' is delivered.

Is this 'proof' that ABA is 'bad'? NO. I had a doctor almost kill me once with a misdiagnosis, I certainly haven't given up on the medical profession. It's like any stereotype though - there are no all or nones, there are individual practitioners, and individual programs. You can't really address stereotypes until you understand where they come from, though, and not all of them are entirely 'made up.

Does anyone know of a DAN Doctor in New Brunswick?