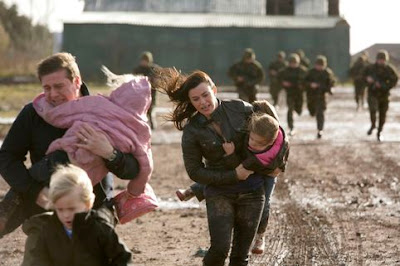 
SPOILER ALERT: Do not read this blog if you intend to watch Torchwood: Children of Earth but have not yet done so.

The BBC's 5 episode Torchwood: Children of Earth series played in Canada this week on the Space television channel. It was good science fiction, using the fantastic plot themes and story lines permitted by science fiction to ask serious questions about the nature of humanity and the difficult choices we make. In Children of Earth the world's leaders are required to decide whether to sacrifice 10% of earth's children to aliens ... for the greater good. The show prompted me to think of public vaccine programs designed to protect "the herd", at potential risk to some vulnerable subsets of children; children who might develop autism disorders after vaccination.
In Children of Earth world leaders are forced by an apparently superior alien power to sacrifice 10% of the world's pre-pubescent children to the aliens who would keep them perpetually alive as units used in producing chemicals to which the aliens are addicted. Failure to do so will result in the destruction of all humanity. The alien menace arises from their ability to unleash deadly viruses that would wipe out all of humanity, viruses for which they hold the antidotes.

The leaders confronted with this choice decide to make the sacrifice and then must decide which children will be delivered to the aliens. Their first thoughts are to use a random process, one which might result at least in some measure of fairness. Ultimately the leaders decide on a process which spares their own children and picks those children who, in their opinion, would end up being a burden on society for various reasons.
The greater good argument appears often in the intense arguments about vaccines and autism. Parents who choose not to vaccinate their children are maligned as parasites and free riders. Questions are raised about the intelligence, even the rationality, of parents whose concerns arise from observation of autistic like regression immediately after vaccination of their children. A celebrity actress and mother like Jenny McCarthy who expresses vaccine autism concerns is demonized while celebrity actress and mother Amanda Peet who criticizes parents of children who decide not to vaccinate as parasites is idolized. The pressure to vaccinate our children is intense.
There is of course no issue of children being sacrificed for the greater good if vaccines do not in fact cause harm to children. But that supposition is simply not true. Historically some children have been harmed by some vaccines. Public health officials will say that these instances are rare, which may be true, but is of little consolation to the child affected, or his or her parents.

The big debate today is over the possible role of vaccines in causing autism disorders. Public health officials, vaccine patent holders and internet Neurodiversity bloggers alike join arms in mocking parents who rely on their own direct observation of their children's post vaccination regression into autism to argue that vaccines actually caused the autism that followed. Apparently the "correlation does not imply causation" or "it's just a coincidence" arguments have infinite shelf lives and can be used no matter how many times the coincidences and correlations occur.

Mocking celebrities and parents is not sufficient though to beat concerned parents into submission. It is also necessary to ignore credible health officials, researchers and professionals who argue that the existing state of science does not actually disprove any connection between vaccines and autism. While Jenny gets much ink from the "vaccines are sacred and shall not be questioned" crowd Dr. Bernadine Healy and Dr. Jon Poling who have stated that some vulnerable children may incur autism from vaccines are all ignored. While the vaccine court decisions in which no vaccine autism connection is found are trumpeted far and wide .... and loudly the cases, like Banks and Poling, where the government folded its hand and settled before a media attracting court decision could ensue are ignored.

I am not convinced that vaccines, and their ingredients, cause or contribute to instances of autism although I suspect they might in some cases just as I suspect other environmental triggers might be involved. I am no longer convinced though, as I once was, by public health official statements that the science is complete, that all the research has been done and that vaccines are not, and never are, involved in causing or triggering autism. When people like Dr. Bernadine Healy and Dr. Jon Poling argue that some autism cases might result from vaccination of some vulnerable children I am not inclined to disregard their comments.

I do not know if children who develop autism after vaccination were sacrificed for the greater good but I also believe that the issue is far from decided. I do know the vaccine program will continue and hope that concerns of parents are addressed through research to prevent possible instances of autism and to enhance public confidence in the vaccine programs which have done so much good for so many.

(UPDATE: It appears from reports late yesterday that Torchwood is being renewed for another season.
...

I hope Torchwood gets picked up for another season. Surely amongst all of the inane and unrealistic "reality"" shows there is room on television for an openly fictional program which asks serious, thought provoking, questions about human nature even while providing first rate entertainment.)

There is no link at all between vaccination and autism. None at all.

You are killing children with your ignorance.

You obviously didn't read my comment. Your accusation is nonsense. Discover magazine has been engaged in such name calling rants against anyone who asks any questions about vaccine safety for some time. It is not a credible, objective source.

I am on the fence myself on the whole vaccine issue at least when it comes to my own child. Her case is kind of complicated in that she did not regress suddenly after any of her shots, but it was more slowly over time.

As far as "the greater good" argument goes, society as a whole is not going to benefit if so many children become autistic that they will require lifetime care. It costs a LOT of money to give disabled adults and teens good, quality care in which they are not only safe, but have good quality of life.

I am honestly scared for all the autistic children of today and what is going to happen when they reach middle adulthood and their parents begin dying and there is nowhere decent for them to go. It's not like group homes are on every corner or affordable to everyone. "The greater good?" Umm, society WILL suffer when our taxes go up dramatically because someone has to support all these disabled adults that will flood us in the next ten years.

And it is already happening:

The epidemic deniers can continue to screech all they want but the walls are crumbling.

There has to be a way to prevent deaths from infectious diseases without ruining so many children's lives in the process. There just has to be.

Harold - I don't understand why you say Jenny is "demonized" while Amanda is lauded. It is JENNY who has her own show through Oprah; JENNY who has best selling books; JENNY who has essentially been gifted Generation Rescue as "her" organization.

Google "autism," and you'll find that "biomed" (or "antivax") organizations like autism.com (ARI) and TACA are among the top ten.

In short, those you feel SHOULD be heard ARE heard. Early and often. The question is not "should Jenny be heard" (SHE IS!) but rather -- are Jenny and her fellow travellers doing harm or good?

IMHO, we are on a dangerous and slippery slope, allowing fear uncertainty and doubt to lead us toward what could be an extremely dangerous outcome.

I don't think you have read my comments carefully.

I agree that Jenny has been heard ... and her concerns about vaccines and autism are mocked by mainstream media as though the science was decided as some official sources now say.

The same media and official sources ignore the Banks and Poling cases and they ignore the comments by Dr. Healy and Dr. Poling that some vulnerable subsets of children may become autistic as a result of vaccine injections.

Dr. Poling is himself a neurologist. Do you not think given that fact and given his successful litigation on his daughters behalf that his opinion should be given some weight?

In this modern era it is not possible to sweep contrary information under the carpet. Dissenting voices can not be bullied into submission so easily.

If vaccines or the mercury (still in them in at least trace amounts) aluminum and biological agents injected into childrens' bloodstreams do cause autism or other damage to their neurological system then we better find out and try to improve "green" vaccines so that they can be used without causing such harm.

The dangerous course is for public health authorities to continue to ignore those who have concerns, to continue to refuse to do the research that was being discouraged back in 1999 according to Teresa Binstock.

The dangerous course is to try to suppress free public discussion of these difficult issues.

Wouldn't you rather have the real answers? That's all we're asking.