The pictures below show, taken yesterday during day 1 of our visit with my parents in Nova Scotia, show some progress Conor has made of late. Conor, in recent years has been unable to come into the home of either his Nanny, (Conor's mother's mother) or the home of my parents. At both locations he would hide in the bathroom or come out with his eyes closed and ears covered. These were people and places he had always loved but could no longer be with. When Conor has not seen someone with whom he once spent time he often reacts this way as he did with former therapists and aides whose company he used to enjoy but had not seen for awhile. It is as though these people aides, therapists, grandparents are all part of earlier chapters of a book and their presence in a new chapter disturbs the story line.
In the pictures below Conor does come into the living room albeit with his ears covered. He did look around the room taking it in. This might not seem like much to many people but to this Dad it is a great improvement. Conor was stressed though and I did not put him through it too long. Back at the motel Conor relaxes, as he does every night at home watching JEOPARDY!® with "the host of JEOPARDY!® Alex Trebek! " (and with Dad too). 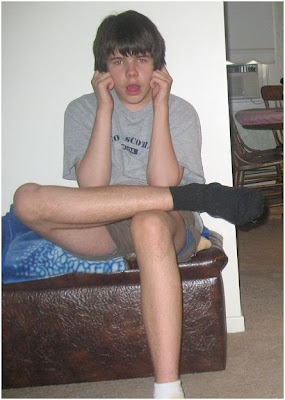 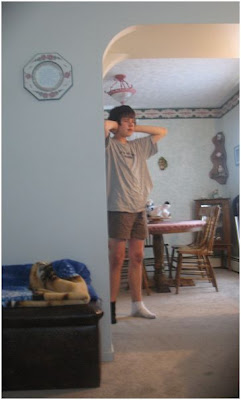 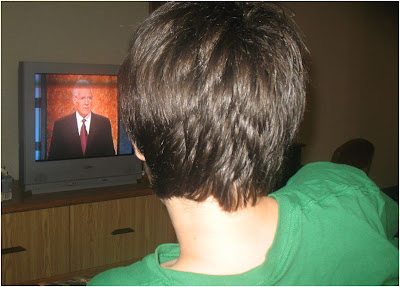 I remember when my daughter wouldn't go near her grandma, even though she adored her. Eventually she would look at her but wouldn't hug. Then one day, a few years ago, she surprised us all by allowing grandma to give her a hug. I can fully understand how you feel. It is a wonderful milestone.

Lovely photos, thanks for sharing.

That's wonderful to see. I hope that with time Conor can enjoy visiting his grandparents again.

I'm glad he likes Jeopardy; I love the show too. Not smart enough to ever get on it and win, though.

I'm so glad to read this. What a great young man Conor is.

Harold, I cannot believe how tall and grown up Conor looks in these photos! Gone are the 'little boy' looks. Wow! He sure is handsome boy -- clearly takes after Heather in the looks department (lol) Have you ever considered a photo social story about visits to his grandparents? Something you could review with him in preparation for the trips? I agree with what you said about different chapters in a book. Perhaps if he saw the photos in a narrated story it would help to bring the grandparents into his 'present' mind as well. Let me know if you want a better explanation -- I could do it for you, just email me the photos and I can put it all together for you in about 1/2 hour! More than happy to help!

I like the idea of the preview book/social story. I thought of something else, too.

Several years ago, while visiting my parents, my daughter w/ asd had a "moment" -- and she was able to express some emotions for the first time.

I wonder if Conor was feeling several emotions at once, realization of missing his grandparents and feelings of love in the present?

The more my daughter is able to verbalize what's inside to me, the more aware I am of her intense emotions.

Harold, I began telling her about when I was a girl, how I loved my grandparents, how I missed them when I wasn't around them.

Sometimes, she'll ask me about when I was a girl.

Conor may not know we all have emotions -- be sure to tell him about yours.